Class III malocclusion is considered a real challenge for the orthodontist [1, 2]. In adult patients, treatment alternatives usually are orthodontic treatment combined with orthognathic surgery or orthodontic camouflage treatment. In severe cases, surgical procedures are indicated to correct the discrepancy and to improve facial aesthetics and function [3, 2]. In mild to moderate Class III malocclusions or when the patient declines orthognathic surgery and is satisfied with his/her facial appearance, camouflage treatment is a valid option, when well indicated [4, 5]. A correct diagnosis with the establishment of realistic treatment goals is necessary to prevent undesirable side effects [1, 5]. When the treatment plan includes dentoalveolar compensation, the costs and benefits involved must be carefully evaluated [1, 5]. It is known that excessive dental compensations may result in undesirable facial aesthetics [5].

The systematic review was prospectively registered in the PROSPERO database registration number CRD42017068642 and is reported according to the PRISMA guidelines [14].

Electronic databases were searched up to January 2019. A systematic electronic search was performed in MEDLINE/PubMed, Embase, Scopus, Web of Science, Google Scholar, Lilacs, and Cochrane databases. No limitations regarding publication year, status or language were applied. Mesh terms and free text words were used in the search. The MEDLINE/PubMed search strategy was: (Class III malocclusion OR Angle Class III malocclusion OR mesiocclusion OR Angle class III OR prognathism OR prognat* OR anterior crossbite) AND (compensatory OR compensat* OR compensation OR camouflage OR non-surgical OR "non-surgical" OR nonsurgical OR conservative). Additional studies were identified by reviewing the reference lists of relevant articles. Unpublished studies were searched on ClinicalTrials.gov.

Reviews, case studies, case series, descriptive or qualitative studies were excluded. Studies that included growing individuals, individuals treated with orthognathic surgery or studies involving participants with cleft lip or palate or any craniofacial deformity were also excluded. The study selection process was carried out independently by two authors. All concerns and disagreements were resolved after discussion with a third reviewer if necessary, until consensus was reached. Possible inclusion was assessed first based on title and secondly based on abstract reading. The full text was assessed for eligibility if the abstract suggested relevance.

Data extraction of the selected studies was performed with the use of a data collection form. Information extracted included: authors, publication year, study design, method of evaluation, study location, characteristics of participants (sample size, age, gender), inclusion and exclusion criteria, details of intervention and outcome measures. Data extraction was performed by two authors independently and in duplicate. Disagreements were resolved through discussion.

V Assessment of risk of bias in individual studies

The risk of bias was assessed with a modification of the checklist described by Downs and Black (Table 1). We simplified the last item (power assessment) by scoring this answer at 0 or 1 point, giving 1 point for a preliminary power analysis calculation [15, 16]. Minor adaptations were performed and questions regarding specific topics for Class III malocclusion treatment were included in the reporting section. Items that were not applicable for the study were removed from the checklist (#14 and #24) [16]. Therefore, the maximum score for this modified Downs and Black tool was 28, with a higher score indicating higher methodological quality. Serious methodological limitations were judged to exist when a study collected less than 15 points on the modified checklist [17]. Assessment of risk of bias was performed independently by two authors. Disagreements were resolved through discussion.

Due to heterogeneity of the studies included in this systematic review, mainly in relation to the characteristics of the interventions applied, it was not feasible to perform a meta-analysis. Therefore, a qualitative synthesis of the data was performed by comparing the results from individual studies according to the study characteristics, type of intervention and outcome measures.

A total of 3393 studies were identified through electronic and hand searching. Of those, 1883 remained after duplicates removal. Titles and abstracts of the remaining studies were assessed, and 1861 were excluded for not being related to the subject or meeting the eligibility criteria. The full texts of 22 articles were assessed for eligibility and 13 were excluded for different reasons (Figure 1). Nine studies fulfilled all inclusion and exclusion criteria and were included in the qualitative synthesis. The characteristics of the included studies are described in (Table 2). 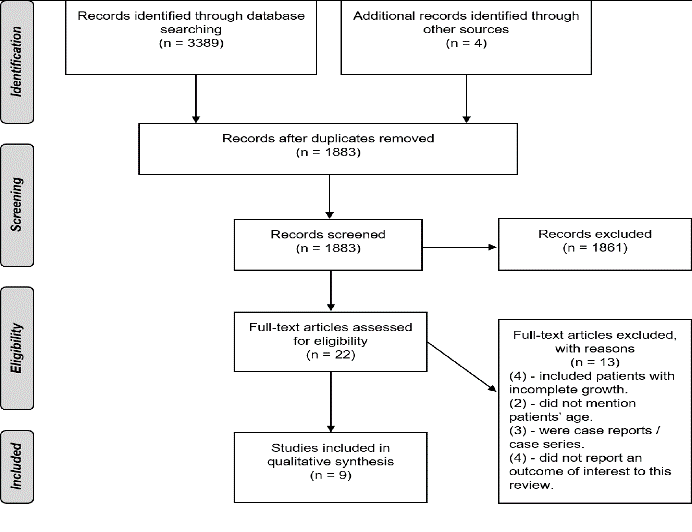 Of the nine included studies, eight were retrospective cohort and one was retrospective case-control [2, 6-13]. No prospective studies, randomized or not, satisfying the inclusion criteria were found. Different methods of Class III malocclusion treatment were described. Five studies included patients treated with teeth extractions [6-10]. Extraction of two mandibular premolars was performed in two studies while extraction of four premolars was performed in one study [8-10]. One study included patients with extraction of one mandibular incisor [6]. One study included patients treated with and without extractions in the same group [7]. No extraction approaches were implemented in four studies [2,11-13] and included distalization of the mandibular dentition, associated or not with Class III intermaxillary elastics. One study used high-pull J-hook headgear to the mandibular arch to correct the malocclusion [11]. Temporary anchorage devices (TADs) were used in three studies [2, 12, 13]. He et al. associated the MEAW (Multiloop Edgewise Archwire) technique with maxillary mini-implants and modified Class III elastics [2]. Yu et al. performed distalization of the mandibular dentition using ramal plates. Nakamura et al. associated TADs and coil springs or elastic chains [12, 13]. The high heterogeneity presented by the selected studies, especially regarding the treatment approaches, prevented performing a meta-analysis.

Detailed information on the risk of bias in individual studies is shown in Table 3. The overall scores ranged from 13 to 21. Four studies scored less than 15 points and presented serious methodological limitations according to the modified Downs and Black checklist [6, 8-10]. Eight studies showed high risk of bias, with the total quality score less than 20, as previously suggested [2, 6-11, 13, 18].

Table 3: Quality assessment of the studies.


We evaluated the quality of the studies with a modified Downs and Black checklist and most studies presented high risk of bias. Only one study presented quality score higher than 20 [12]. The small number of participants, the lack of sample size estimation and the absence of comparison groups were some of the main shortcomings. Several reasons prevented some articles to be included in this review. Since our main objective was to evaluate the effects of camouflage treatment in adults, articles that did not specify the patients’ age had to be excluded, even when it was related to the permanent dentition. There are cases where a control group or at least a comparison group is required to include a study in a systematic review [18, 23]. Since the articles included only nongrowing patients, the lack of a comparison group was not considered an exclusion criterion for the study selection, as growth would not be considered a confounding factor [24]. Heterogeneity was observed in malocclusion severity and type of appliance used. There was a lack of standardization in the description of Class III malocclusion. Identification of malocclusion severity is essential to characterize the sample, describe the treatment difficulty, and, most importantly, determine the best treatment approach [25]. Although description of anteroposterior molar relationship is essential to evaluate and compare treatment results, it was not clearly described in the included studies. Even in nongrowing patients, long-term follow-up is required to confirm effectiveness of the employed treatment. Most included studies focused only on the short-term treatment results, with a lack of long-term follow-up. One study evaluated the effects of mandibular incisor extraction and presented a 4.3-year follow-up (SD=2.3 years) with stable results [6]. It is important to emphasize that all patients kept bonded mandibular lingual retainers at the time of follow-up in that study. Another study evaluated the effects of the high-pull J-hook headgear at least 2 years after the retention period and observed minimal horizontal relapse of the maxillary and mandibular incisors, indicating that the treatment results were fairly stable [11]. From clinical observation, the occlusion was well-maintained when the effects of the MEAW technique with and without mini-screws were evaluated, despite the fact that some statistically significant differences were found one year after retention [2]. Still, short-term favorable results are not conclusive and robust enough to allow prediction of the long-term treatment effects achieved by the appliances used.

Two studies included groups that used Class III intermaxillary elastics to correct the malocclusion [2, 12]. The mechanics resulted in counter clockwise rotation of the occlusal plane, increase in mandibular plane angle and clockwise rotation of the mandible, and increased anterior face height. Therefore, the use of intermaxillary Class III elastics should be avoided in patients with open bite and high mandibular plane angle and indicated for patients with short face and mandibular prognathism. Four studies attempted to restrain the effects to the mandibular arch. Molar uprighting was the main factor that contributed to correction of the Class III relationship when the J-hook headgear and the Class III elastics with maxillary mini-screws were used [2, 11]. The effects promoted by the two mechanics were similar and characterized by retroclination and extrusion of mandibular incisors and distal tipping of the mandibular molars. Since extrusion of anterior teeth benefits open bite correction, both mechanics could be suitable to correct Class III malocclusions with open bite tendency. The insertion of TADs in the mandibular arch allowed distalization of the mandibular dentition [12, 13]. Further investigations are necessary to clarify the relationship between TADs insertion sites and the effects in mandibular dentition distalization. The selected studies included patients with mild to moderate skeletal Class III malocclusions. For those patients, almost all of the studies reported achievement of satisfying and adequate results. Only one reported a few cases with a tendency to unilateral or edge-to-edge canine or premolar relationships [6]. Because the skeletal changes were mostly characterized by changes in the mandibular plane angle and changes in the skeletal bases anteroposterior relationship were not obvious in most of the studies, it is important to emphasize that orthodontic camouflage treatment for skeletal Class III patients has limited results. Thus, for severe cases, surgical orthodontic treatment is the best option.

From the limited available evidence, it is possible to suggest that the treatment changes are influenced by the method used to correct the Class III malocclusion. The treatment effects are primarily dentoalveolar. The quality of the evidence available was low, with most of the studies classified as having high risk of bias. Further studies with an improved quality level are needed to determine the effects of Class III malocclusion camouflage treatment.

Ethics approval and consent to participate

The authors declare that they have no competing interests.

© 2019 Karine Laskos Sakoda Sakoda. This is an open-access article distributed under the terms of the Creative Commons Attribution License, which permits unrestricted use, distribution, and reproduction in any medium, provided the original author and source are credited. Hosting by Science Repository. All rights reserved.
DOI: 10.31487/j.JDOA.2019.01.04


Table 3: Quality assessment of the studies.