Cholecystocutaneous Fistula Associated with Necrotizing Fasciitis of the Abdominal Wall: A Case Report

Cholecystocutaneous fistula represents an extremely rare complication of calculous cholecystopathy. In the past 50 years, less than 50 cases have been reported. The most frequent site of spontaneous cholecystocutaneous fistula is the right hypochondrium, followed by the left hypochondrium, periumbilical, right lumbar, right iliac fossa and gluteal areas. The association with necrotizing fasciitis that represents a serious infection, characterized by extensive and rapidly progressive necrosis, affecting the subcutaneous plane and reaching the muscular fascia provides a high mortality rate and extensive procedures are required. Herein we present a case of a 64-years-old, female, admitted to the emergency department with complaint of diffuse, severe abdominal pain, associated with a tense and painful lesion in the abdominal wall with the diagnose of cholecystocutaneous fistula associated with necrotizing fasciitis that despite an aggressive surgical approach developed a multisystem failure and died 24 hours after admission.

Cholecystocutaneous fistula represents an extremely rare complication of calculous cholecystopathy. In the past 50 years, less than 50 cases have been reported. It is defined as the communication of the gallbladder with the external environment through the loss of continuity of the abdominal wall, usually due to chronic inflammatory process of the gallbladder. The most frequent site of spontaneous cholecystocutaneous fistula is the right hypochondrium, followed by the left hypochondrium, periumbilical, right lumbar, right iliac fossa and gluteal areas [1].

The first reports of this condition were described, in 1670, by Thilesus, followed by reports by Bonnet in 1876, Courvosier in 1890 and Naunyn in 1897. Represents a rare complication that occurs in less than 10% of patients with cholelithiasis. In recent years, probably due to the earlier diagnosis and surgical resolution of cholecystopathy, a drastic reduction in the number of reported cases were observed [1-3]. Table 1 summarizes the case reports from the world literature within the 21st century. Necrotizing fasciitis represents a serious infection, characterized by extensive and rapidly progressive necrosis, affecting the subcutaneous plane and reaching the muscular fascia. Its mortality ranges from 13-76%, being influenced by early diagnosis as well as by underlying morbid conditions. Its association with external biliary fistula is an extremely rare condition [4].

The cholecystocutaneous fistula represents a condition secondary to inflammation, most often chronic, of the gallbladder. The vast majority of the reported cases are related to calculous cholecystopathy, however, it is known that other conditions that generate inflammatory process of the gallbladder, such as acalculous cholecystitis and neoplastic process, can also be related to etiology. It is known that Salmonella typhi infection is a predisposing factor to chronic inflammation of the gallbladder and consequently to the formation of cholecystocutaneous fistulas [5]. As for pathophysiology, the mechanism related to the development of the fistula begins with the increase in the intraluminal pressure in the gallbladder resulting from obstruction of the cystic duct. As consequence, a reduction in blood flow is observed, followed by necrosis and perforation, resulting acutely as peritonitis, sub acutely as abscess or in a chronic form with the formation of fistulas [5, 6].

Table 1: Case reports from the world literature within the 21st century.

RAF, 64-years-old, female, admitted to the emergency department with complaint of diffuse, severe abdominal pain, associated with a tense and painful lesion in the abdominal wall. The patient sustained also a psychiatric disorder, using risperidone and promethazine, and was unable to specify the aspect and duration of the symptoms. During physical examination, the patient was in poor general condition, dehydrated, tachycardic, with increased respiratory rate, normotensive, anicteric and afebrile. The abdominal examination demonstrated the presence of an extensive lesion compromising most the abdominal wall, with the presence of phlogistic signs (pain, heat and hyperemia) in addition to crackling and areas of necrosis with blistering (Figure 1).

Laboratory tests were performed with the following results: leukocyte count of 16,200, with 20% of rods and 40% of segmented ones, PCR 371.1, Creatinine 4.9, Urea 210, venous lactic acid 95.0, INR 1.7, TTPA 37.6, arterial blood gases with pH 7.18, pCO2 26.0, pO2 53.5, HCO3 10.7, BE -16.1, O2 saturation 75.2, other laboratory tests within normal ranges. Despite the severity of the clinical condition during admission at the ER, the patient presented with blood pressure at normal levels, and was submitted to an abdominal CT scan that revealed blurring of part of the subcutaneous fatty planes, noting gaseous components on the right side. Empiric antibiotics were promptly initiated following institutional protocols using metronidazole and ceftriaxone prior to surgery. 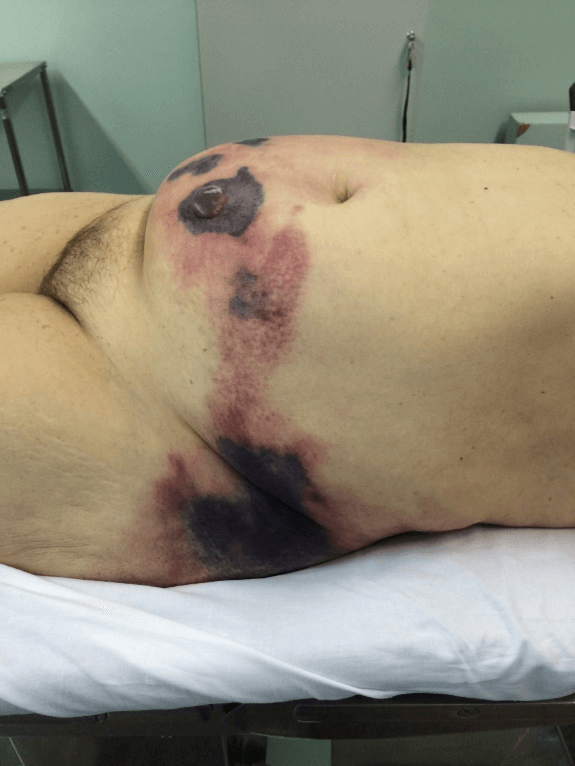 Figure 1: Appearance of the abdominal wall with signs of necrosis.

In view of the findings, the patient underwent extensive debridement of the abdominal wall, removing all the necrotic tissues from the upper right quadrant and lateral region of the wall bilaterally, with the discharge of a large amount of purulent-looking secretion with characteristic odor, with extensive involvement of subcutaneous tissue. During debridement in the lower right quadrant of the abdomen, multiple gallstone calculi were identified. When extending the debridement to the upper right quadrant, a fistulous orifice was found with the gallbladder. The purulent fluid was collected from the abdominal cavity, which later identified the presence of Escherichia coli. During the intraoperative period, the patient developed hemodynamic instability requiring high doses of vasoactive drugs (Figure 2).

Figure 2: Intraoperative appearance of the tissue with necrosis and the presence of gallstones.

After removal of necrotic tissues, the patient was then stabilized and prepared for a new approach after 12 hours to expand the initial debridement of necrotizing fasciitis, (Figure 3), with cholecystectomy, (Figure 4). The anatomopathological study of the abdominal wall showed skin and soft tissues with a chronic suppurative inflammatory process and, in another segment, fibro-adipose and skeletal muscle tissue with chronic non-specific suppurative inflammatory reaction and necrosis. Anatomopathological examination of the gallbladder revealed chronic calculous cholecystitis. 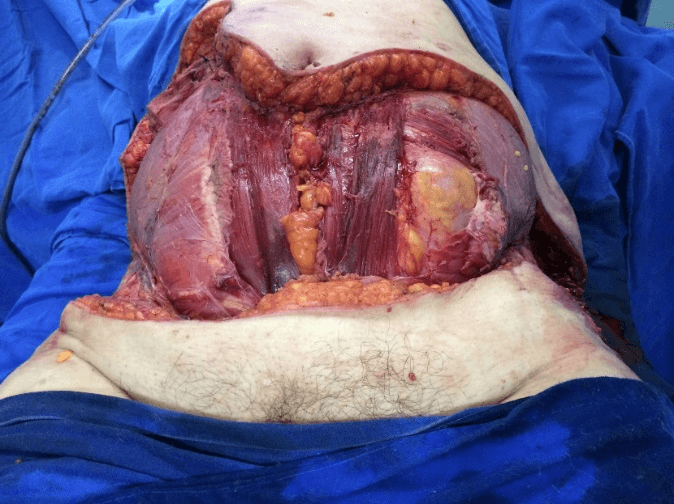 The patient in the postoperative period in the intensive care unit evolved with severe septic shock and hemodynamic instability with the need for increasing doses of vasopressors yet presenting with refractory hypotension. The patient progressed to cardiorespiratory arrest and death 24 hours after the surgical procedure.

Cholecystocutaneous fistulas represents a very uncommon complication due to an inflammatory or infectious process involving the gallbladder. Biliary fistulas can be divided into internal and external. Internals are more common, with 75% involving the duodenum and 15% the colon. External fistulas are infrequent and rarely occur spontaneously due to inflammation of the biliary tract or liver abscesses. Most of the time, they occur as postoperative complications of liver, biliary tract or trauma-related surgery [1]. This condition was first described in 1670 by Thilesius. In 1890 Courvosier described 499 cases of gallbladder perforation associated with acute cholecystitis, of which 169 had cholecystocutaneous fistulas. In 1897, Bonnet reported another 122 cases of spontaneous cholecystocutaneous fistulas. In 1986, Naunyn described 184 cases, one of the largest series in the last 30 years. However, despite previous reports, the number of occurrences of this condition has significantly decreased in past years. This decrease in incidence is probably due to early diagnosis, the availability of antibiotic therapy and due to early surgical treatment for acute cholecystitis as well as gallbladder empyema [7].

This contrast in the incidence of the disease is reflected when looking at large series studies published before the 20th century, compared to recent literature, in which spontaneous external fistulas occur mainly in women between the fifth and seventh decade of life and may be related to the increase in conditions such as cholecystitis and gallbladder cancer in this age group. The most affected site is the upper right quadrant (48%), as shown in the case described, followed by the umbilical area (27%) and finally the right inguinal area and buttocks. The pathophysiology of the disease is related to increased pressure in the gallbladder with a consequent decrease in local blood flow, necrosis and perforation. Perforation can occur acutely, leading to peritonitis, subacute when observing the formation of abscesses or chronic with the formation of fistulas. It is known that there is a greater relationship with acute acalculous cholecystitis, with Salmonella typhi infection being a predisposing factor for the occurrence of the fistulas. The incidence of perforation in acalculous cholecystitis is lower, corresponding to 0.6 to 1% of cases [5, 6].

Generally, patients have an insidious clinical picture, complaining of recurrent biliary colic and in more advanced cases worsening of abdominal discomfort, bulging in the abdominal wall and the presence of bile content leaking through the skin. Although the signs and symptoms of spontaneous cholecystocutaneous fistula are evident, it is necessary to carry out studies with imaging tests such as ultrasound, tomography or fistulogram to make the definitive diagnosis [3]. The treatment of this disease is based on cholecystectomy, resection of the fistula and repair of the defect in the abdominal wall, in addition to the management of possible complications resulting from the disease. The option of an abbreviated surgery (damage control) as the initial approach for our patient was due to the presence of intraoperative hemodynamic instability, and after stabilization in the ICU, the patient was returned to the operating room to complete the procedure.

It is important to highlight that an extensive removal of necrotic tissues (surgical debridement), the collection of material for culture as well as the introduction of antibiotics with a wide spectrum of action, mainly for gram negative and anaerobic agents are fundamental steps for the treatment. The patient will only return to the operating room for a new procedure after hemodynamic stability and recovery of physiological parameters [8]. Despite being a rare complication of calculous cholecystopathy, all the acute care and general surgeons must have a high index suspicion. With the rapid diagnosis and early surgical treatment, there was a reduction in the incidence of such fistulas, but it is still possible to find it due to the high incidence of calculous cholecystopathy in the general population. The association of necrotizing fasciitis with this condition should be promptly diagnosed and treated, given the high morbidity and mortality associated with these cases.

Although cholecystocutaneous fistulas are infrequent and their incidence has decreased over the years, early diagnosis associated with adequate and accurate intervention is of fundamental importance. Once the diagnosis is made, surgical treatment associated with antibiotic therapy and meticulous post-surgical monitoring are essential to have a favourable and positive prognosis with reduced morbidity and mortality.

© 2019 Marcelo Ribeiro. This is an open-access article distributed under the terms of the Creative Commons Attribution License, which permits unrestricted use, distribution, and reproduction in any medium, provided the original author and source are credited. Hosting by Science Repository. All rights reserved.
DOI: 10.31487/j.AJSCR.2020.02.07

Table 1: Case reports from the world literature within the 21st century.

Figure 1: Appearance of the abdominal wall with signs of necrosis.

Figure 2: Intraoperative appearance of the tissue with necrosis and the presence of gallstones.