Venous Thromboembolism (VTE) is one of the complications of Inflammatory Bowel Disease (IBD) which includes Ulcerative Colitis (UC) and Crohn’s Disease (CD). The risk of thrombosis is estimated at a three-fold increase compared to controls, with an overall incidence estimated between 1%-8% [1, 2]. VTE occurs mainly during the active phase, but a study indicates that one-third of thromboembolic complications occurred during inactive phase [3].

Factors that affect the homeostasis system in IBD include prolonged immobilization, surgical procedures, central venous catheters, glucocorticoid therapy, cigarette smoking, hyperhomocysteinemia, vitamin deficiency, dehydration, and damage of the vascular endothelium [4]. Changes in the coagulation and fibrinolytic mechanisms in patients with IBD have been proposed as the pathophysiology of VTE. Higher levels of coagulation factors, lower levels of fibrinolytic factors and plasma coagulation inhibitors have been also considered. Other factors can be endothelial damage in hyperhomocysteinemia, higher platelet activation, and a higher level of autoantibodies [3, 4].

Most VTE events occur in the lower extremities or appear as pulmonary embolisms, but they can also occur in other locations such as hepatic, portal, cerebral, and mesenteric veins [2]. Cerebral venous sinus thrombosis (CVST) has a reported incidence between 0.5% - 6.7% and is associated with a high mortality rate [5].

Most of the publications that report CVST in IBD are single case reports, however, CVST in IBD after craniotomy has not yet been reported. Cerebral venous thrombosis is of significant clinical importance due to its association with a high mortality rate. Surgeons’ awareness has to be increased regarding this kind of complication. Here, we present a patient with a fatal outcome from CVST after microvascular decompression surgery for hemifacial spasm, on the background of ulcerative colitis in the inactive phase.

A male patient of 62 years complained of frequently recurring left-side facial twitching and was diagnosed with hemifacial spasm 5 years before admission. He had previously received carbamazepine drug therapy and botulinum neurotoxin injection treatment, but it didn’t relieve the symptoms well. The twitching frequency gradually deteriorated and became almost impossible to open his left eye. MRI showed that the facial nerve root exit area from the medulla was compressed by a large vertebral artery.

The patient decided to undergo surgery, and a microvascular decompression surgery was adopted. The MRI showed left vertebral artery compression to the facial nerve in the root exit zone (Figure 1). The CT angiography showed good visualization of the superior sagittal sinus and transverse-sigmoid sinuses bilaterally (Figure 1). 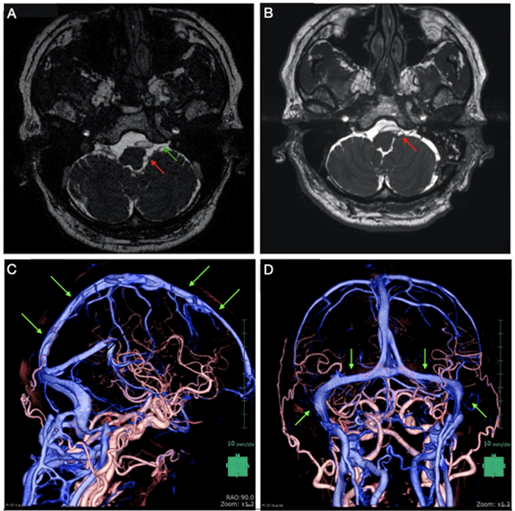 The patient had previously been diagnosed with ulcerative colitis (UC), Psoriasis Vulgaris, and hypertension. Pre-operative evaluations were performed also by a gastroenterologist and dermatologist. Both concluded that the ulcerative colitis condition was currently inactive and stable, and surgery could be performed. The patient also had treatment with cyclosporin, corticosteroids, and mesalazine suppositories. All the medication was already stopped because of the remission.

The surgery was performed via lateral suboccipital approach successfully without any complications. A three-centimeter small craniotomy was done without any damage to the sigmoid sinus and transverse sinus. Transposition of the vertebral artery was done using Teflon sling stitching to the dura mater, and hemifacial spasm symptoms disappeared immediately after the operation. Post-operative MRI showed that adequate transposition of the left vertebral artery was achieved (Figure 1). Post-operatively the patient complained of constipation that was resolved and was discharged 1 week after surgery. He had also some generalized fatigue and appetite loss, but he could do his daily activities independently. Before he was discharged from the hospital, his general condition improved, and he did not have any bowel symptoms.

One week after discharge, swelling of the face and both upper limbs were detected. The patient was consulted by a dermatologist, and as an allergic reaction was suspected, he received a single dose of oral steroid. That improved the swelling and the appetite of the patient.

However, one week later or 3 weeks after the surgery, the patient was admitted to the hospital emergency department due to impaired consciousness. A CT scan showed multiple frontal hemorrhages, and the following angiography showed complete occlusion of the superior sagittal sinus (SSS). An endovascular thrombectomy was performed in emergency, and the SSS was recanalized (Figure 2). However, peripheral veins were still occluded. During this hospitalization, Laboratory examination showed an elevated white blood cell count, low platelet count, and high levels of D-dimer (Table 1). The patient expired 3 days after admission. 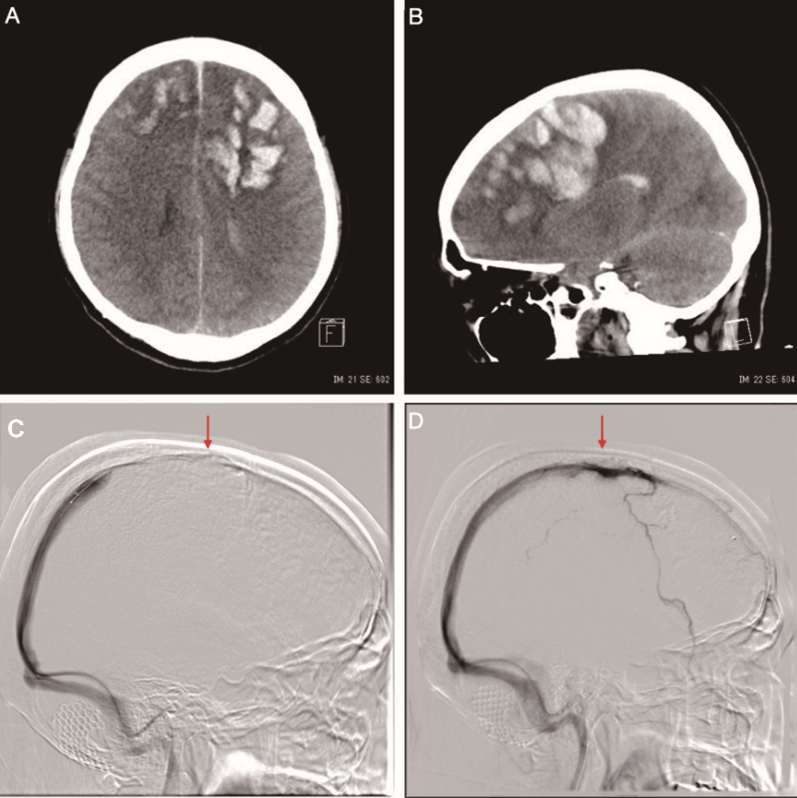 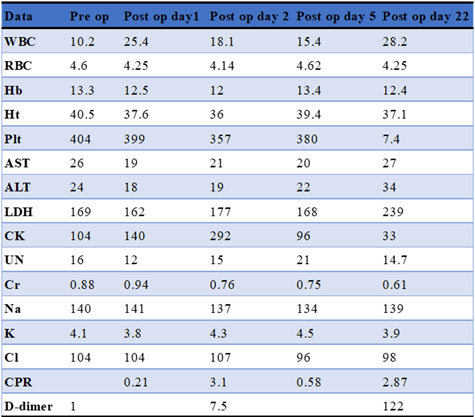 The risk of CVST is high after surgery in IBD patients [6]. Until now, there has been no case report with such observation after craniotomy surgery, more in microvascular decompression surgery. CVST in IBD incidence was reported in the range of 0.5 – 6.7%. We analysed the risk factors that possibly lead to CVST in this patient. Aishah Ibrahim Albakr and Noor Almohish analysed risk factors for CVST in patients with IBD and pointed at corticosteroid therapy, anemia, previous thrombotic events, inherited thrombophilia, high homocysteine level, hormonal therapy, and post-operative condition [6]. Another study added D-dimer level as a risk factor [5]. Owczarek et al. mention acquired prothrombotic factors in Inflammatory Bowel disease dehydration, glucocorticosteroid therapy, prolonged immobilization, central venous catheters, surgical procedures, oral contraceptives/hormonal replacement therapy, smoking and hyperhomocysteinemia [4]. Ulcerative Colitis was more common than Chron’s Disease to lead to CVST [6].

It is more often for thrombosis to occur in active IBD conditions, but occasionally that can be seen during remission [5]. Control of disease activity is an important factor in reducing the risk of venous and arterial thrombotic events in patients with IBD [8]. Clinical and endoscopic remission should be confirmed given that persistent subclinical inflammation can also increase the risk of a thrombotic event [8]. In the present case, mesalazine suppositories were used occasionally, indicating that the patient might have been occasionally symptomatic. The surgical procedure was an additional factor that elevated CVST risk.

Treatment with cyclosporin and corticoids increased the risk of venous thromboembolism, although not specifically for CVST [9-11]. The mechanism of cyclosporin thrombogenicity is still controversial. It was proposed that cyclosporin enhances relies from endothelial cells of von Willebrand factor (VWF), a classic platelet agonist, and platelet aggregation was increased due to a higher level of VWF in the circulation. Cyclosporin also induces endothelial cell dysfunction by suppressing nitric oxide production and initiating the coagulation pathway. Increased D-dimer and fibrinogen level was also associated with cyclosporin [11]. The time range in which cyclosporin could induce CVST is between 9 days to 11 months, and a specific time for this induction remains unclear [10]. However, in our case cyclosporin was already stopped before surgery and the risk of CVST from cyclosporin intake for this patient was ruled out.

White blood cell (WBC) level was higher than normal patient post-operative condition compared with the CRP level. It might be this WBC reaction is also one of the risk signs. The IBD patient tends to have an easy inflammatory response. Possible effects of psoriasis, history of taking immunosuppressive drugs such as Cyclosporine, and other immunosuppressive drugs, and complications such as IBD and autoimmune diseases, as well as interactions, are also possible.

Mesalazine is the only drug that was still administered occasionally. A single study showed evidence for the possibility of mesalazine increasing the risk of thromboembolism [12]. However, data from RCTs investigating the use of mesalazine in patients with ulcerative colitis have not shown any safety signals toward an increased risk of venous thromboembolism [8, 13].

The risk of thrombotic events in IBD patients increased also with steroid consumption. Several studies and a meta-analysis have shown corticosteroids in IBD treatment increased the rate of VTE [14-16]. Steroid was taken only once after the patient complained of the face and upper extremity swelling which the suspected cause was an allergic reaction. Steroids are needed for IBD in the active phase, and that also can increase the risk of thrombosis.

Cerebral venous sinus thrombosis in remission UC is rare but is related to high morbidity and mortality. After the patient’s consciousness level deteriorated was found thrombosis of the superior sagittal sinus. Venous congestion caused multiple intracranial hemorrhages in the frontal lobe. Within the previously reported 10 cases of cerebral hemorrhage associated with ulcerative colitis, there was 50% mortality, 30% partial resolution of symptoms, and 20% recovery [19]. Paper by Aishah Ibrahim Albakr and Noor Almohish which collected the published case report showed that most of the patients have a good outcome with complete recovery after treatment. This happens because of improvements in diagnostic and treatment for CVST patients. If we can find in the early stage of the condition, there is a higher possibility of getting a better outcome. Headache was the most common symptom, followed by seizures, focal neurologic disorder, changes in mental status, and symptoms of increased intracranial pressure, such as nausea, vomiting, and papilledema [6].

Peri-operative assessment of VTE can be measured by D-dimer examination [20, 21]. Pre-operative D-dimer level of this patient had been checked and showed a normal level. However, during the CVST event, D-dimer became markedly elevated. There was a possibility that thrombosis had occurred also in other locations. The greatest risk of post-operative VTE is within 10 days after hospital discharge [22]. Benlice and colleagues found that 61% of VTE events occurred within the first 2 weeks after hospital discharge [23]. In this case, the patient developed CVST 3 weeks after the first hospital discharge, so it was possible that the CVST was progressing for 3 weeks. In patients of high risk for developing VTE, as when being performed on surgery, D-dimer examination peri-operative for VTE screening in 1-2 weeks period can be a possible future policy, even if the patient has not developed any symptoms of VTE or CVST yet. If an elevated level is found, additional tests have to be performed. Further treatment can be done in the early stages too.

The mortality outcome was not directly related to the surgery itself, but surgery was one of the risk factors for developing CVST in this patient. There should be awareness of the risks of cerebral venous sinus thrombosis and all thromboembolism in IBD patients, even when the disease is in an inactive phase (remission).

i. Avoid dehydration for at least 3 weeks during the peri-operative period; D-dimer is an indicator of thrombosis, so regular D-dimer measurements should be performed according to the patient's physical condition during the peri-operative period.
ii. Care must be taken for the worsening of IBD symptoms due to surgical invasion.
iii. If there is a possibility of thrombotic symptoms or an elevation of D-dimer, confirm the absence of bleeding complications and then aggressively administer anticoagulants to ensure a decrease in D-dimer.
iv. Early aggressive treatment, including endovascular therapy, is recommended if an extensive intravenous sinus thrombus is identified.

The risk of venous sinus embolization in surgery for patients with IBD is very high, and great care must be taken, especially during surgery in the active phase of IBD symptoms. At the same time, surgery during the inactive phase can also lead to thrombotic tendencies as well. Whether in the active or inactive phase, one should be aware of systemic thrombotic complications of the cephalic sinus, including the SSS, as well as the deep veins.

The authors have no personal financial interest in any of the drugs, materials and devices described in this article.

© 2023 Kentaro Watanabe. This is an open-access article distributed under the terms of the Creative Commons Attribution License, which permits unrestricted use, distribution, and reproduction in any medium, provided the original author and source are credited. Hosting by Science Repository.
DOI: 10.31487/j.AJSCR.2022.04.06