The selection clinical criteria to study hereditary cancer syndromes is cumbersome and can miss diagnoses due to the incomplete penetrance and variable phenotype of susceptibility germline mutations. A universal diagnostic strategy aims to avoid these criteria and looks to improve diagnostic sensitivity among the general population with cancer.

Beyond its potential as a biomarker for treatment, the BRCA germline mutation prevalence of 22.6% in Australian population-based high-grade serous ovarian cancer (HGSOC), endorsed by a meta-analysis with a prevalence of 14.5%, has been acknowledged and a universal strategy for hereditary breast and ovarian cancer (HBOC) syndrome diagnosis in these tumors has been adopted, although without cost-effectiveness comparative studies [1, 2]. In unselected metastatic prostate cancer series, the assessment of 20 genes involved in DNA integrity maintenance provide a prevalence of 11.8% germline mutation carriers (6.2% for BRCA mutations), which could shortly be below 10% in the population without clinical criteria [3]. In the Spanish population of unselected metastatic castration resistant prostate cancer (mCRPC), the prevalence of germline mutations is 16.2% (4.3% for BRCA mutations) with a panel of 107 genes [4].

With a 410-gene tumor assay MSK-IMPACT (Memorial Sloan Kettering-Integrated Mutation Profiling of Actionable Cancer Targets) and a paired germline set of 76 genes in histology-agnostic cancer patients, of the 103 pathogenic BRCA mutations, 59 were germline in origin, whereas 44 were detected only in the tumor [7]. Tumor analyses detect more mutations in hereditary cancer predisposition genes than germline tests and this has been clearly stated for HGSOC in different studies: the results reported by The Cancer Genome Atlas (TCGA), the analysis of Homologous Recombination (HR) genes, the review of several series and a retrospective study of a randomized phase II trial [8-11]. In the daily practice of a tertiary hospital, we estimated the prevalence of somatic and germline BRCA1/2 mutations in non-mucinous high grade ovarian/fallopian tube/peritoneal extraovarian cancer (NMHGOC) and prostate adenocarcinoma for a different universal predictive and diagnostic strategy.

I Trial Design and Patients

We designed a retrospective study of prospective cohorts of patients with NMHGOC and prostate adenocarcinoma, unselected for family history, consecutively assisted at a medical oncology service of a tertiary hospital, and who in their standard clinical management have followed BRCA1/2 tumor testing for prognostic, predictive or diagnostic objectives, before a germline analysis.

In daily practice, some assisted patients with prostate adenocarcinoma followed a tumor BRCA1/2 mutation study, after DNA extraction, with the Oncomine™ BRCA Research Assay of two pools of AmpliSeq™ oligonucleotide primers and associated reagents to generate amplicon libraries for next-generation sequencing (NGS) on Ion Torrent™ platforms. The platform is endowed for highly uniform coverage across all coding exons and splice sites for efficient sequencing and accurate analysis. The Oncomine BRCA Assay is a complete kit facilitating the amplification of the entire exonic region of both BRCA genes from FFPE tissue. The assay is aligned with bioinformatic workflows within Torrent Suite™ and Ion Reporter™ analysis software that utilize optimized variant calling parameters for SNV, InDel, and large exon/gene deletion/duplication detection.

Following an established universal diagnostic strategy in HBOC, every patient with NMHGOC was to be assisted at a Genetic Counseling Unit (GCU). All the patients with a BRCA tumor pathogenic variant were sent to a GCU, for a genetic counseling process in accordance with Spanish law [5]. They signed an Informed Consent for germline testing of, at least, the deleterious mutation uncovered at the tumor. The pathogenic variants were confirmed or discarded at the germline setting by Sanger sequencing, HA_CAE (heteroduplex in capillary electrophoresis) and Big Dye Terminators sequencing in an ABI 3100 analyzer.

The trial was designed and performed by medical oncologists at a tertiary hospital. The protocol of the present study was developed in accordance with the Declaration of Helsinki, with Good Clinical Practice as defined by the International Conference on Harmonization, CPMP/ICH/135/95, and approved by the Committee for Ethics and Clinical Trials of the University Hospital of Burgos. Signed consent was waived for the study, since it was a retrospective analysis, reviewing standard clinical practice, developed in the best care of the patients´ health, without harm for the participating subjects and with honest management of the linked and created data.

Of the 43 patients, 32 (74.1%) were assisted at our hospital's GCU, and a BRCA1/2 germline test was performed in 27 due to a family history of cancer, early age at diagnosis of cancer, insufficient tumor sample for BRCA study, or BRCA1/2 mutations in the tumor. We found BRCA1/2 germline mutations in 9 patients (20.9% of the 43 patients). In the 24 patients who completed the BRCA1/2 analysis in the germline setting and in the neoplastic tissue, the tumor mutation rate was 41.7% (10/24) and the germline prevalence of mutations was 29.2% (7/24). None of the patients without a BRCA1/2 mutation in the tumor had a germline mutation. 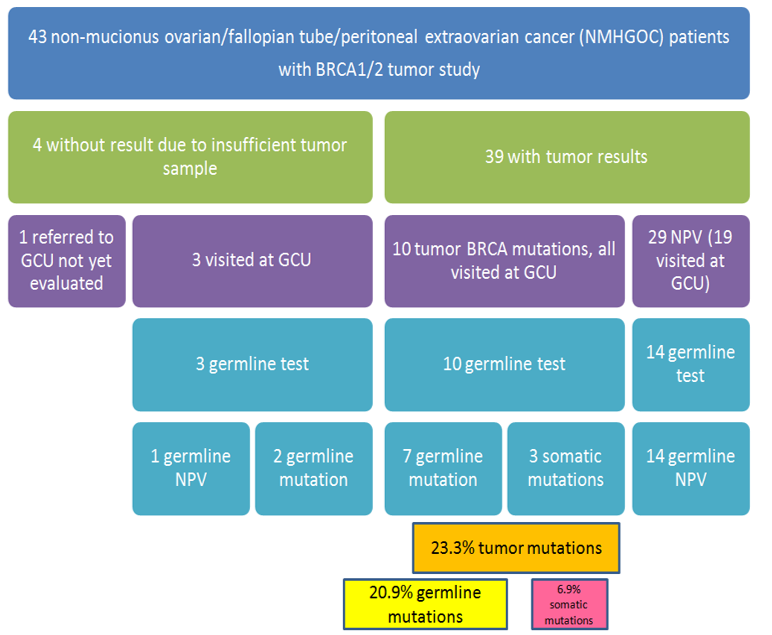 In patients with prostate adenocarcinoma, one patient was analyzed in 2017 and 8 in 2018. 2 patients (22.2%) had a BRCA2 mutation in the tumor. One was studied in the germline setting without the mutation, so he had a somatic mutation. The other patient could not be studied but his daughter had the mutation in the germline setting, so this patient was an obligatory carrier. Therefore, in the cohort of patients with prostate adenocarcinoma, the estimated prevalence of somatic mutations is 11.1%, the estimated prevalence of germline mutations is 11.1% for a BRCA1/2 tumor mutation rate of 22.2% (Table 2).

In our hospital, the estimated prevalence of BRCA1/2 mutations in tumors of patients with NMHGOC is 23.3%, while the estimated prevalence of germline mutations for the same population is 20.9%, in concordance with the published literature [1, 8]. In the 24 patients who completed both BRCA1/2 analyses, in the germline setting and in the neoplastic tissue, the tumor mutation rate was 41.7% (10/24) and the germline prevalence of mutations was 29.2% (7/24). We consider that the analysis in the tumor brought to light 6.9% of patients with somatic mutations, which would not be detected with a germline analysis.

We have also estimated the prevalence of BRCA1/2 mutations in 9 patients with prostate adenocarcinoma not selected by family history. We found tumor mutations in 2 (22.2%), with one somatic mutation (11.1%) and one germline mutation (11.1%), a figure higher than those described by Pritchard et al. and Castro et al. although with a low number of cases analyzed [3, 4].

Not all the 43 patients with NMHGOC have been tested for BRCA1/2 mutations at the germline setting, but every mutation in the tumor was studied to dismiss hereditary predisposition. It would be rare that a BRCA germline mutation (different to a large rearrangement) could have remained undetected at the tissue with a good tumor purity and quantity. This could have happened with bad tissue preservation, lack of sample, or low-quality DNA extraction. When any of these events were reported, as happened with four patients, the tumor test was not pursued and the germline analysis was established as a better choice, to be done in a universal diagnostic strategy. The presence of a germline BRCA mutation different from the one already detected at the tumor is not probable either, since the allelic fraction should be the same or higher. In addition, under a universal diagnostic strategy, in patients without a tumor BRCA1/2 mutation but with clinical suspicion of hereditary cancer, a germline testing was established.

Then, although an argument could be made for a higher prevalence of germline BRCA1/2 mutations in the cohort of NMHGOC patients, we consider that missing germline mutations due to the previous concerns would have been anecdotic, and that the estimated somatic and germline prevalence reliably reflect the real prevalence. Disparities between the real and estimated somatic/germline BRCA1/2 mutations prevalence are not expected in the cohort of prostate adenocarcinoma patients either, since the technology is capable of detecting CNV at the tumor. Concordance with the scientific literature supports these conclusions.

A meta-analysis of 14 studies has shown a more favorable prognosis for women with ovarian cancer associated with germline BRCA1/2 mutations, due to a greater sensitivity to platinum-based chemotherapy [13]. Germline or somatic BRCA1/2 mutations have also been associated to PARP (poly ADP-ribose polymerase) inhibitor activity [14-22]. Nowadays, it is a recommendation that all patients with non-mucinous epithelial ovarian cancer undergo germline BRCA1 and BRCA2 mutational analysis in the first instance for diagnostic, predictive and prognostic purposes; in patients who test negative for germline mutation, the analysis should be completed with somatic testing of tumor tissue [23]. This has been proven feasible with a streamlined oncologist-led BRCA germline testing and counseling, in order to save genetic counseling visits due to a shortage of genetic counselors; however, this model is difficult to reconcile with Spanish law which establishes that genetic counseling has to be performed by qualified professionals at accredited centers [5, 24].

Our series resembles the published data, demonstrating that tumor analyses, with the added possibility of revealing somatic mutations, detect more BRCA1/2 mutations than germline tests [7-11]. These findings endorse a reverse strategy. Starting the BRCA1/2 test at the tumor should detect more mutations in the first approach than the germline analysis, improving prognostic and predictive yields. It could also serve as a molecular tumor screening for hereditary cancer diagnosis, selecting those tumors with BRCA mutations for testing the same gene alteration at the germline setting. This would lead to a more cost-effective diagnosis of HBOC, preserving accuracy while saving a lot of mandatory, legally imposed pre-counseling visits in our country, while also allowing a real streamlined process initiated by other specialists (since tumor testing has less ethical and legal implications), to be completed by genetic counselors when a germline analysis is required [5]. For the joint objective of HBOC diagnosis and treatment prediction, the reverse strategy spares and eases genetic counseling proceedings and genetic tests (Figure 2). 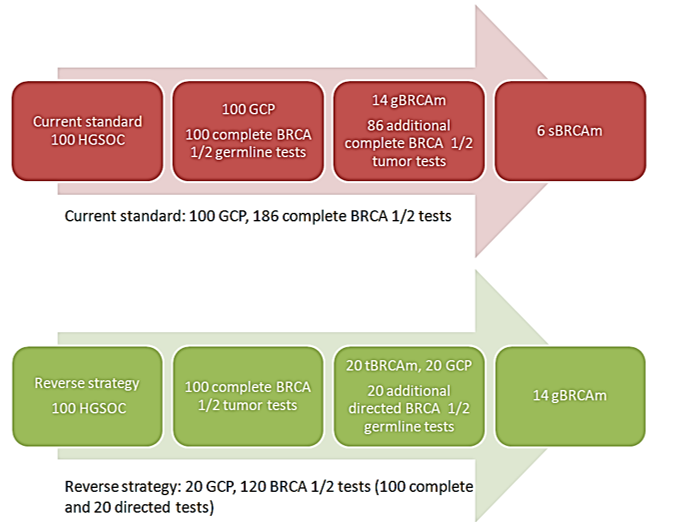 To reach full clinical utility validation and feasibility for HBOC diagnosis in our country (with stringent legal issues in the field), results should be confirmed in a wider, multicenter, prospective clinical trial of Spanish NMHGOC cases unselected for family history, employing technology capable of detecting BRCA CNV at the tumor setting and with complete germline BRCA testing in all the patients, to measure the real, possible loss of HBOC diagnoses.

Furthermore, it should be advisable to validate other reverse strategies, based on analyzing the genomic instability phenotype (somatic molecular hallmark of HRRD), given that three independent DNA-based measures of genomic instability have shown a predictive value for PARP-inhibitor treatment: loss of heterozygosity (LOH), telomeric allelic imbalance (TAI), and large-scale state transitions (LST) [18-20, 25, 26]. HRDetect, a low coverage affordable whole genome sequencing (WGS) test that utilizes a multiple mutational signature to capture an HRRD phenotype, has been developed in cohorts of ovarian, breast and pancreatic cancer samples as an accurate somatic molecular screening for HBOC diagnosis [27]. HRDetect also merits better validation in a reverse strategy for HBOC identification.

Our results in prostate adenocarcinoma point to the same diagnostic possibilities for HBOC. Considering the overall 17.4% prevalence of mutations in HR genes in 17,566 tumors with different histologies, and with the advent of an agnostic precision oncology based on multiplex gene panels that incorporate hereditary cancer genes and molecular profiles (HRRD, microsatellite instability, tumor mutational burden), a reverse strategy for hereditary cancer diagnosis is going to be imposed in some patients [28]. In this new scenario, genomic and molecular portrait results are a challenge for the inference of a possible germline mutation. In ovarian cancer, tumor BRCA pathogenic variants are usually driver, actionable mutations and must be discarded as hereditary (even with a low allelic fraction, unless there is good tumor purity and quantity); however, in other histologies with tumor HR gene mutations, it is advisable to demonstrate an HRRD for therapeutic objectives [29].

In conclusion, our study depicts the estimated somatic and germline BRCA1/2 mutation prevalence in two cohorts of non-mucinous high grade ovarian/fallopian tube/peritoneal extraovarian cancer patients and prostate adenocarcinoma patients. In agreement with published data, the tumor mutation rate is higher than germline mutation prevalence, raising the hypothesis of a more cost-effective analysis for predictive and diagnostic goals, with neoplastic tissue study as the first attempt.

© 2021 Mercedes Durán Domínguez. This is an open-access article distributed under the terms of the Creative Commons Attribution License, which permits unrestricted use, distribution, and reproduction in any medium, provided the original author and source are credited. Hosting by Science Repository.
DOI: 10.31487/j.ACO.2020.02.01