Denture stomatitis (DS) can affect about 70% of denture wearers causing inflammation of oral mucosa underneath the removable denture mostly seen at the palatal area. Candida albicans is a well-known as the main causative agent associated with denture stomatitis. Studies shown that DS-related biofilm consists of complex structured of microbial communities. Presence of co-existing bacteria in these biofilms may also contribute to the infection. In order to understand the microbial interaction between C. albicans and bacteria, this study focus on the ability of bacteria species which are Streptococcus mutans and Staphylococcus aureus to form biofilm with and without the presence of C. albicans. For this study, two groups were observed which are the single species biofilm and the mixed species biofilm. Biofilm assay was utilized to measure biofilm mass using spectrophotometer. From the observation, single species groups formed a better biofilm when compared to fungal-bacterial biofilm. Even though biofilm assay is unable to determine the number of cell available, both species were present when fungal-bacterial biofilm sample was observed microscopically using Gram stain technique. This experiment showed that both fungal and bacteria species are able to form biofilm together and this finding can be investigated further for better understanding of DS-related biofilm.

Microbial biofilms are associated with medical device infection and it is known that Candida- associated denture stomatitis (DS) is caused by Candida spp. that coexist with oral bacteria [1, 2]. From literature, denture stomatitis are caused by yeasts, typically Candida albicans, although other species such as C. parapsilosis, C. tropicalis, C. glabrata, C. krusei, C. guilliermondii and C. dubliniensis, may contribute to the pathogenesis of the disease [3]. Besides that, there were bacteria from several genera such as Streptococcus, Veillonella, Lactobacillus, Prevotella and Actinomyces spp. isolated in DS samples [4]. Staphylococcus aureus and Streptococcus mutans are the common colonizers of DS from the samples and there were other bacterial species identified on denture surfaces such S. sanguinis, S. gordonii, A. odontolyticus and A. viscosus [3, 5, 6]. Oral cavity provides a complex environment that consist of variety of species, and its population densities are most likely dynamic. Therefore, it is necessary to understand if the presence of bacteria with C. albicans will improve the biofilm formation. The objective of this study is to investigate the biofilm formation of single and mixed species communities by comparing biofilm mass between single species biofilm and fungal-bacterial biofilm using crystal violet assay.

Biofilm assay using crystal violet employed a colorimetric method to measure the formation of biofilm in 96-well plates [8]. This technique was used to investigate the biofilm mass of single species and mixed species biofilm. For single species biofilm, a total of 210µL consist of 205µL of tryptone soy broth (TSB) (OXOID, UK) (30gL-1) and 5µL of each species of S. mutans, S. aureus and C. albicans were added into 96 well plate. While in a mixed species biofilm wells, 200µL of media and 5uL of C. albicans and 5µL of either S. mutans or S. aureus were added into 96 well plate (with total of 210µL). Each sampling was done in triplicate. Distilled water and TSB were used as control. The plate was covered and incubated aerobically at 37oC overnight in a humid environment. Once incubation period is finished, the cell was removed by flicking, and 100µL crystal violet (0.5% v/v) was added into 96 well plate and incubated at room temperature for 15 minutes. The wells then were rinsed three times with 200µL of PBS. 100µL of 7% (v/v) acetic acid were added in order to dissolve the dye. The absorbance reading was done using microtitre plate reader (Infinite M200 PRO, Tecan, USA) at 570nm. 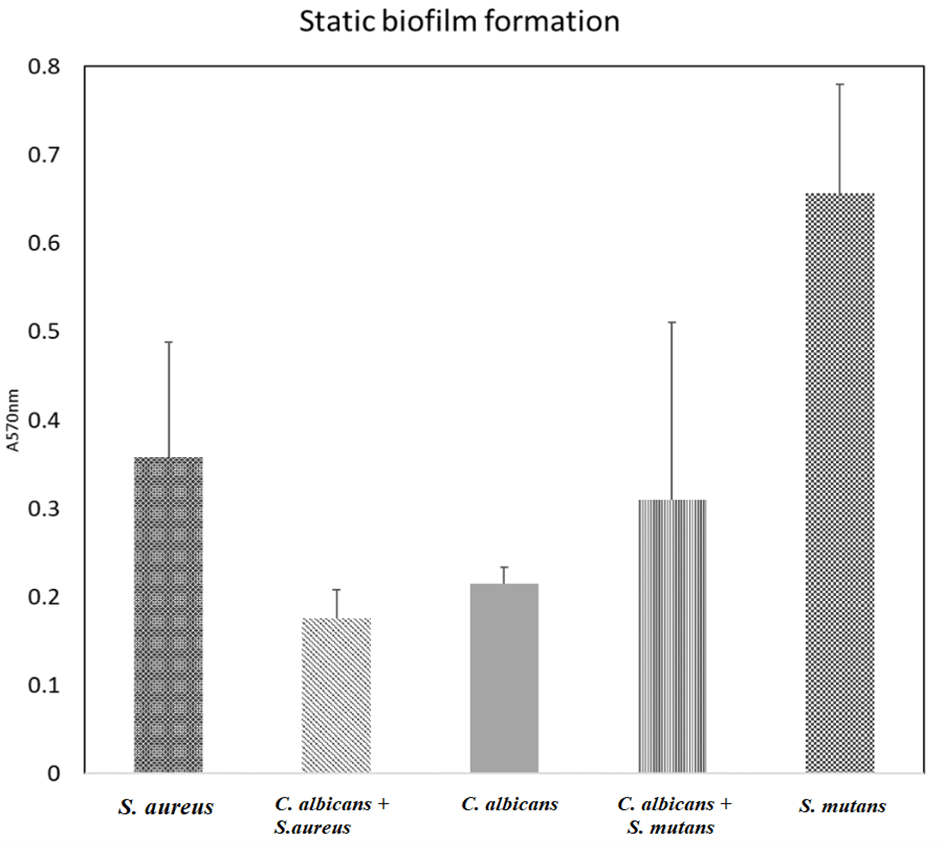 All the species chosen in this experiment are oral microbiome and commonly found in denture stomatitis as stated by Nair et al., 2016 and this experiment has showed that both fungal and bacteria species are able to form biofilm together in the same environment [6, 7, 9]. Biofilms present on intravascular medical devices and prosthesis and become the source of infection. C. albicans is readily forms biofilms on a wide variety of polymers used for indwelling medical devices, such as dental materials, stents, shunts, prostheses (voice, heart valve, knee), implants, endotracheal tubes, pacemakers, and catheters [10]. There is some evidence to suggest that a large proportion of device-related Candida albicans infections involve biofilms [11]. S. aureus is the common colonizer of the skin and mucous membrane and can enter the bloodstream and causes bacteraemia, osteomyelitis, toxic shock and many more infections. The capacity of S. aureus to form biofilm as well as the virulence have become problematic. From the result, biofilm mass of mixed C. albicans and S. aureus has almost similar with C. albicans only biofilm mass.

Studies has found that 27% of C. albicans bloodstream infections are polymicrobial and S. aureus was the common organism isolated together with C. albicans and the combination of these two organisms will result in synergism. S. aureus was found to be associated preferentially with hyphae within the biofilm and also formed microcolonies on the surface of the biofilm. It appeared that C. albicans served as the scaffolding, with S. aureus scatter among the hyphal network [12]. Interestingly, when S. mutans was incubated with C. albicans, there was an increase of biofilm mass. This showed that S. mutans also have the ability to form biofilm when present in the same environment with C. albicans as previously reported by Kim et al., 2017 [9]. This maybe due to the symbiotic relationship between S. mutans and C. albicans. Physical coadhesion of S. mutans and C. albicans is drastically enhanced in the presence of sucrose; these conditions also promote biofilm formation [13, 14]. C. albicans does not efficiently metabolize sucrose and is favoured by degraded products of sucrose by S. mutans (glucose and fructose). In contrast, the presence of C. albicans in the biofilm alters the physical environment, favouring the increase of exopolysaccharides and consequently, accumulation and formation of microcolonies by S. mutans [14].

This is a comparative pilot study and only used a simple model to mimic the biofilm formation in the oral cavity by static biofilm formation. This study can be proceeded with RT-PCR to quantify the number of microbial species presence in the biofilm and the usage of more advance biofilm model that can mimic the intra oral environment should be investigated. Thus, it can be explored further for better understanding of denture stomatitis related biofilm as there is inadequate of extensive study regarding the association of other bacteria in the biofilm associated with denture induced stomatitis.

© 2021 Syatirah Najmi Abdullah. This is an open-access article distributed under the terms of the Creative Commons Attribution License, which permits unrestricted use, distribution, and reproduction in any medium, provided the original author and source are credited. Hosting by Science Repository. All rights reserved.
DOI: 10.31487/j.DOBCR.2020.06.02