Rhabdomyosarcoma (RMS) is the most common soft tissue sarcoma in children. It is located mainly in the head and neck, extremities and trunk, rarely achieving the biliary tract (1%). The clinical presentation is characterized by obstructive jaundice, abdominal pain and palpable mass. The prognosis is favourable when being early diagnosed. The main differential diagnosis is the choledochal cyst. We bring a case report about a patient with biliary tract rhabdomyosarcoma, diagnosed and treated for 1 year as choledochal cyst, presenting obstructive jaundice for one year. A hepatic biopsy was done, showing hepatic fibrosis. He presented clinical worsening and was referred for liver transplant. An exploratory laparotomy was done before planning the transplant, which showed a biliary tract mass, followed by a biopsy. The anatomopathological result was RMS. Biliary tract RMS is a rare entity that should be included in the differential diagnosis of obstructive jaundice in children. Because of its similarity with choledochal cyst, pediatricians and surgeons should consider this hypothesis, for adequate investigation and treatment.

Rhabdomyosarcoma (RMS), the most common form of soft tissue sarcoma in children and adolescents, accounts for approximately 4%-5% of childhood malignancies [1-3]. RMS demands a systemic treatment and local control, they are chemosensitive and also radiosensitive [2]. The most common sites in the pediatric population are the head and neck, genitourinary system and extremities [2-5]. The liver and biliary ducts are rare sites of RMS and represent only about 0.5-1% of all pediatric RMS [1, 6, 7]. The median age at diagnosis is about 3 years, with slight male predominance [4, 7]. It is generally originated in the common biliary duct, but it can also emerge from any point of the biliary tree and cause obstruction. Jaundice is the presenting symptom in 60%-80% of cases and biliary tract RMS (BT-RMS) was described as one of the most frequent causes of obstructive jaundice due to neoplastic biliary obstruction in children with an average age of 3 years [2, 8, 9]. The low incidence of biliary rhabdomyosarcoma makes diagnosis challenging and imaging evaluation particularly important [4]. Cholestatic conditions are often initially diagnosed as hepatitis, drug-induced jaundice, and choledochal cyst, which is the main differential diagnosis for this disease [10-13]. This case report aims to highlight this diagnosis and justify the inclusion of biliary RMS in the differential diagnoses of a child presenting with obstructive jaundice.

This is a retrospective, descriptive case report. It was approved by the UNIFESP Ethics Committee, reference number 4.573.888. Data were collected from medical records, with the evaluation of the signs and symptoms of the onset of the condition, diagnostic investigation process and treatment. A literature review on biliary tract RMS and differential diagnosis with choledochal cyst was performed on the PubMed platform.

He started treatment with ursodeoxycholic acid and was submitted to liver biopsy, whose pathological examination concluded as hepatic fibrosis. He presented progressive clinical worsening and was referred to the hepatology service, aiming for liver transplantation. In August 2014, an exploratory laparotomy was indicated to approach the choledochal cyst. During the procedure, an unresectable solid tumor was identified in the biliary duct, and a biopsy was performed. The diagnosis was embryonal rhabdomyosarcoma, and the patient was referred to a pediatric oncology center 1 year and 6 months after the onset of symptoms. 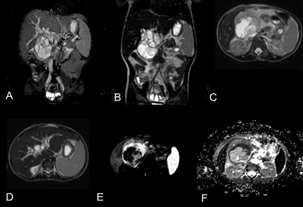 When admitted to the Pediatric Oncology Service, he presented increased bilirubin levels and altered liver biomarkers enzymes (TB 1.54; DB 1.39; ALP 776; GGT 394, AST 65; ALT 74). The staging exams showed no distant metastases and combined with the local exam (Figure 1), he was classified as having rhabdomyosarcoma clinical group III, stage 1 and low-risk B (COG classification) [3, 14].

He was treated according to the Brazilian Protocol for Rhabdomyosarcoma, receiving Vincristine, Cyclophosphamide, Actinomycin and radiotherapy at a dose of 50.4 Gys at the primary tumor site. He remained in remission for 2 years and 8 months. In June 2018, the patient presented local recurrence of the tumor with cholestatic jaundice, fever and abdominal pain. Bile duct drainage procedure and alternative chemotherapy were performed. The patient evolved with disease progression and liver failure with death in February 2019.

Obstructive jaundice in pediatric patients can be related to choledocholiths, choledochal cysts, strictures in the settling of chronic cholangitis, inflammatory pseudotumor and rarely neoplasms such as biliary rhabdomyosarcoma and cholangiocarcinoma in the common bile duct [2, 4, 7, 8]. Choledochal cyst is the main differential diagnosis of biliary tract RMS. It is a congenital malformation of the biliary ducts, first described in 1763 by Vater and Ezler. The annual incidence is 1:100,000, being more prevalent in the Asian population, at 1:13,000 [15, 16]. Its origin is not fully established. It is believed to arise from an abnormal pancreaticobiliary junction during embryonic formation, characterized by dilatation of the bile duct, whether intra- or extrahepatic. The diagnosis occurs mainly during childhood; meanwhile, 20% are diagnosed in adulthood [15]. It presents with obstructive jaundice, abdominal pain in the left upper quadrant, and in some cases a palpable abdominal mass, and may evolve with pancreatitis, cholangitis and liver dysfunction due to obstruction secondary to malformation or calculi [15, 17].

When investigating biliary tract RMS and differential diagnosis, imaging plays an important role in defining the etiology. The ultrasound (US) is typically the first imaging modality, followed by computed tomography (CT) or magnetic resonance imaging (MRI) [4]. The BT-RMS is characterized as a central hepatic mass, with dilatation of the bile ducts. When bigger, they are heterogeneous, with cystic areas (usually representing necrosis) and may resemble choledochal cysts, especially if they show no local invasion. If smaller, they can be seen as intraductal masses, presenting similar aspects of the choledochal cyst [7, 9]. MRI is the best method for assessing the extent and relationship to the vasculature. It has been reported to originate from hepatic cysts and choledochal cysts, but this report may be related to an initial misdiagnosis [7, 12]. Sometimes the diagnosis is defined after an invasive procedure (such as ERCP), intraoperatively or in pathology. Table 1 presents the cases already described in the literature of BT-RMS presentation similar to the choledochal cyst.

Apart from the case of hepatic rhabdomyosarcoma, the cases had been diagnosed as choledochal cyst type I [12]. Most of the described cases had a final diagnosis after undergoing procedures for the management of the biliary tract cyst. Mainly after anatomopathological results, either by resection surgery or biopsy [5, 10-12, 18]. In Kumar, 2012, there was intraoperative suspicion of rhabdomyosarcoma given the solid nature of the tumor, as the case described in this report [13]. In Matthew, 2019, choledochal cyst was suspected after ultrasonography and computerized tomography, but RMS was taken as the main hypothesis after MRI demonstrated a solid mass [4].

A review of the AIEOP-STSC group (Associazione Italiana Ematologia Oncologia Pediatrica Soft Tissue Sarcoma Committee) collected data from 3 prospective studies, identifying 10 cases of rhabdomyosarcoma of the biliary tract, among 921 rhabdomyosarcomas (approximately 1%), 5 patients were alive after 90-200 months since diagnosis without sequelae, 4 died with disease progression and 1 due to complications after liver transplantation [2]. A study from the Cooperative Weichteilsarkom Studiengruppe (CWS) with 17 patients found 15 with embryonal histology, 2 were classified as alveolar. The 5-year overall survival of the study was 58% and the event-free survival 47%. The 2 patients of alveolar histological classification died [1].

Chemotherapy, associated with local control, is mandatory. Complete excision cannot be achieved in most patients (84%), leading to radiotherapy [2-5]. Localized disease has reached 60-70% of overall survival [4, 8, 18]. Metastatic disease may be identified in approximately 25-30% of cases of BT-RMS at presentation (hepatic, pulmonary, lymph nodes, peritoneal and bone metastasis described) [4, 8]. Currently, CT scan of the chest, abdomen and pelvis, in addition to bilateral bone marrow aspirates and biopsy, and bone scan, are recommended [4].

The biliary tract is classically considered to be a favourable location. The histology is mostly of the botryoid or embryonal type, which confers a better prognosis [4, 19]. The suboptimal evolution of patients with BT-RMS treated as low risk has been discussed, and the benefit of treatment in intermediate risk has been suggested [20]. The described patient was initially managed as a choledochal cyst. Ultrasound (US), computed tomography (CT) and magnetic resonance imaging (MRI) were performed with the hypothesis of choledochal cyst that was only elucidated after a laparotomy and biopsy. He presented an unresectable tumor at diagnosis, with no distant metastasis, being classified in the IRSG low-risk group. He had an overall survival of 5 years and six months. Unfortunately, he relapsed and, despite the alternative protocol, passed away seven months later. Despite being a rare diagnosis, biliary tract rhabdomyosarcoma should be considered in obstructive jaundice in children, because its identification and initial approaches are essential for a better outcome.

Although BT RMS is a rare entity, it should be included in the differential diagnosis of any child presenting with obstructive jaundice. Due to its similarity with choledochal cyst, it is important for pediatricians and surgeons to consider this hypothesis for further evaluation and correct diagnosis. Establishing the correct diagnosis is imperative to initiate the correct therapeutic intervention.

© 2021 Fernanda de Oliveira Mota. This is an open-access article distributed under the terms of the Creative Commons Attribution License, which permits unrestricted use, distribution, and reproduction in any medium, provided the original author and source are credited. Hosting by Science Repository.
DOI: 10.31487/j.COR.2022.02.01