Malignant tumor originated from external auditory canal (EAC) is very rare with an annual incidence of around 1 per million. Yet, basal cell carcinomas are less frequent than squamous cell carcinomas. Nevertheless, it is difficult to determine if their prognosis is better, as in other areas of the body. Due to the rarity of malignant tumor of EAC, there is no widely accepted treatment modality yet. But basal cell carcinoma, is known to be less aggressive tumor than squamous cell carcinoma and can be removed with a minimal safety margin and has a better treatment result. In this case report, we experienced a case of basal cell carcinoma (BCC) in the EAC, confined in the cartilaginous portion of EAC, presented with intermittent otorrhea and pruritis in the right ear. The patient was treated with local excision of the lesion with a safety margin and direct closure. No recurrence or complications were noted in the first postoperative year.

A 61-year-old female patient otherwise in a good health, presented with a 4-years history of intermittent otorrhea and pruritis in the right ear. physical examination revealed a small blackish to brownish nodular mass, measuring 2×1.5 cm, arising from the posterior inferior aspect of the right cartilaginous portion of the EAC, right tympanic membrane was intact (Figure 1). Clinical examination of the head and neck region was normal with no lymph nodes enlargement. Audiologic and laboratory investigations were within normal range. From history and examination, it appeared to be BCC of the EAC, an excisional biopsy with 4mm safety margin was performed under general anesthesia. Borders of the lesion were marked by two threads (Figure 2). Histopathologic examination revealed BCC with free surgical margins. 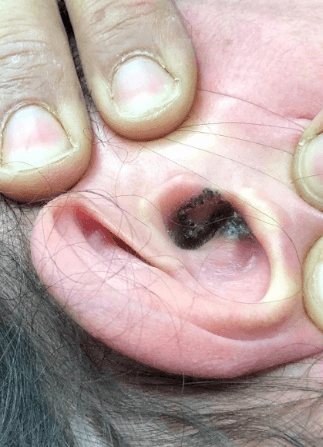 Figure 1: Photograph of external auditory canal revealing a small blackish to brownish nodular mass, measuring 2×1.5 cm, arising from the posterior inferior aspect of the right cartilaginous portion of the EAC. 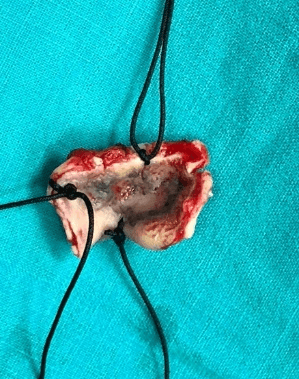 According to the Pittsburgh staging system, the patient had tumor limited to the EAC without bony erosion or evidence of soft tissue involvement (T1), no lymph node metastases (N0), and no distant metastases (M0) [8]. The patient underwent surgical excision of the lesion with safety margin and direct closure (Figure 3). Although, after excision the ear lobule was pulled up slightly. But the cosmetic results were satisfactory. Pathologic findings confirmed a basal cell carcinoma in situ not invading the cartilage, all surgical margins were free of invasion (Figure 4). No adjuvant chemotherapy or radiotherapy were administered. One year postoperative follow up, the patient is good with no evidence of complication or recurrence. 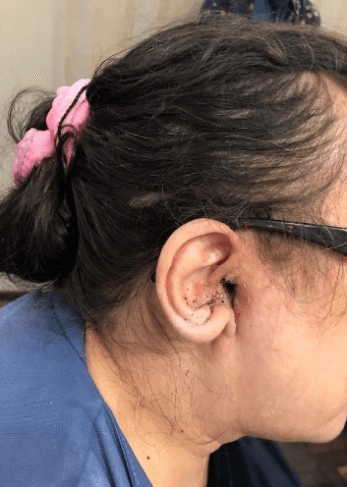 Figure 3: Photograph of the patient two weeks after the surgery after removal of stiches. 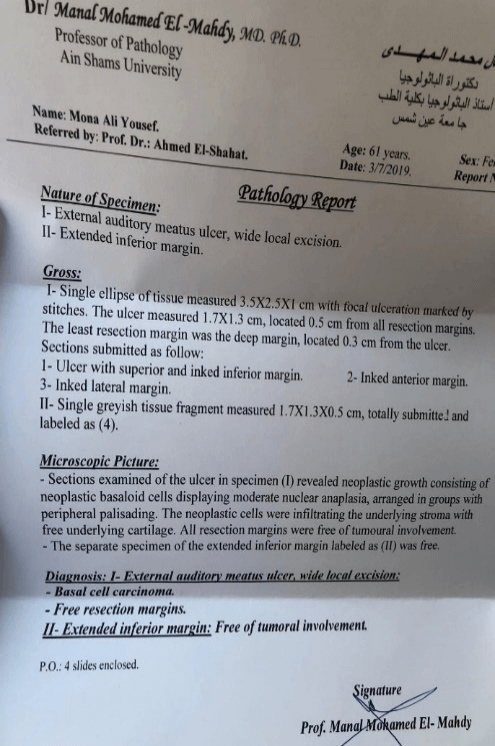 Figure 4: Photograph of histopathological report of the case showing the diagnosis of BCC of EAC with free surgical margins.

Among carcinomas of EAC, squamous cell carcinoma (SCC) is the most common, accounting for 80% of tumors within the temporal bone [9]. Whereas Basal cell carcinoma, adenoid cystic carcinoma, adenocarcinoma, melanoma, and various sarcoma are among the other malignancies (20%) within the temporal bone [10]. Basal cell carcinoma of the EAC is known to be a locally malignant tumor with lack of regional lymph node metastasis. These carcinomas are less lethal because of their slower growth rate and rare metastasis [11, 12]. But there is an incidence of transformation of BCC to SCC about 1-2 %. Basosquamous carcinoma (BSC) has the potential for aggressive infiltration and distant metastasis [13].

In 1990, the Pittsburgh group, planned a staging system for SCCs of the EAC [8]. In spite of difference between SCC and BCC, regarding that the BCC is locally malignant and will not spread to lymphatics or send distant metastasis. So, by applying this classification all forms of BCC will be considered grade 1, like grade 1 of SCC, which make the simple excision with safety margin curative. The prognosis was related to the stage of the disease. E. Vandeweyer et al. reviewed six patients, presented with locally advanced basal cell carcinomas of the external auditory canal, the history of their disease, the treatment procedures and final oncological outcome were considered. Four of the patients died of the disease within five years from surgery. They presented with local recurrences even after radical surgical excision in free tissue margins. BCC of the EAC is an aggressive tumor associated with a really poor prognosis even after radical surgery [3]. Fortunately, our patient had tumor limited to the EAC without bony erosion or evidence of soft tissue involvement (T1), no lymph node metastases (N0), and no distant metastases (M0). So, excision with safety margin is curative with good results.

Arriaga et al. proposed a primary tu¬mor, regional nodes, metastasis (TNM) staging of EAC carci¬noma on the basis of clinical examination, and preoperative CT scan findings [8]. The classification method pro-posed by Arriaga et al. is advantageous with regard to treat¬ment because it correlates the clinical and radiologic charac¬teristics in patients. Because of the rarity of malignant tumor of EAC, there are no randomized clinical trials. Therefore, the management of these tumors is difficult.

But, in our case report study, we depend in diagnosis of BCC of EAC mainly on history and clinical examination, there was no need for preoperative radiological diagnostic tools to reduce the cost of investigations on the patient. As, usually BCC behaves in the way that it is locally malignant and will not spread to lymphatics or send distant metastasis. Finally, the diagnosis is confirmed by histopathological examination. In several studies, authors disagree about the extent of surgery and the role of radiotherapy and chemotherapy in managing these tumors. Gidley discussed about treatment strategies focused on the carcinoma of EAC [14]. Early stage tumors can be managed with surgery alone. Whereas radiotherapy and chemotherapy are reserved for later stage tumors. Due to rarity of cases of BCC of EAC even in large centers, so there is paucity of knowledge in the literature about different treatment modalities of BCC of EAC.

Small tumors that do not cross medially over the bony-cartilaginous junction and are confined to the soft tissues could be removed alone with safety margin and direct closure (simplest maneuver of the reconstructive ladder), as in our case presentation. In large tumors cartilaginous ear canal can be removed with wide local excision, where the skin of the ear canal and the underlying cartilage are removed (sleeve resection) with application of split thickness skin graft (STSG) [2]. Even for large and infiltrative tumors, excellent survival rates are typically seen after resection with tumor-free margins, but there is a propensity for local recurrence. When BCCs are encountered in regions where aggressive resection would lead to significant aesthetic or functional consequences, such as the ear, the appropriate extent of surgery is controversial [15]. Patients with early stage cancer benefited from less aggressive surgical approach, while survival was poor in patients with an advanced cancer who went through a more aggressive surgery despite adjuvant radiotherapy [11, 16].

Excision with safety margin and direct closure is curative for patients with BCC of external auditory canal. There are some limitations to the study; due to the rarity of cases of BCC of EAC, randomized clinical trials are difficult. Also, due to the possibility of local recurrences even after radical surgical excision in free tissue margins, the postoperative follow up period should be more than one year.

© 2019 Eman Nagy Mohamed. This is an open-access article distributed under the terms of the Creative Commons Attribution License, which permits unrestricted use, distribution, and reproduction in any medium, provided the original author and source are credited. Hosting by Science Repository. All rights reserved.
DOI: 10.31487/j.JSCR.2020.04.06

Figure 1: Photograph of external auditory canal revealing a small blackish to brownish nodular mass, measuring 2×1.5 cm, arising from the posterior inferior aspect of the right cartilaginous portion of the EAC.

Figure 3: Photograph of the patient two weeks after the surgery after removal of stiches.

Figure 4: Photograph of histopathological report of the case showing the diagnosis of BCC of EAC with free surgical margins.