Background: The benefits of regular exercise are well recognized in type 2 diabetes subjects. However, a substantial proportion of patients don’t exercise at all. We aimed to enumerate the barriers to exercise in Type 2 Diabetes Mellitus (T2DM) patients and factors associated with these barriers.
Methodology: We conducted a cross-sectional study of successive type 2 diabetes patients attending routine out-patient diabetes clinics in five tertiary care hospitals in Kolkata, India from 1st April,2017 to 31st March 2018. All patients who matched our study eligibility criteria were interviewed by diabetes care providers using a structured questionnaire modeled after a systematic review of similar studies but tuned to regional preferences. Besides demographic details, patient particulars and laboratory investigations, the questionnaire included 2 direct questions on possible barriers to exercise. The questions were grouped into five categories viz. environmental (4 questions), behavioral (9 questions), occupational (2 questions), physical inability (7 questions) and medical reason (1 question). Patients’ who didn’t meet the ADA-EASD recommended exercise (at least 150 minutes moderate intensity aerobic physical activity viz. brisk walking at 3-4 km-hr) were classified as non-exercisers.
Results: The present study included a total of 1061 patients of which 617 were males versus 444 females. 636 (59.9%) were not doing physical activity as per current international standards. A substantial higher proportion of females (68.9%) did not exercised as compared to males (53.5%), which is statistically significantly higher, p<0.001. Insulin usage was found to be significantly associated to hamper exercise (p=0.017), physical activity being 8% lower (34.5% in insulin users versus 42.5% in non-insulin users). Male gender (OR-1.877, 95% CI=1.217-2.894, p=0.004) and doctor’s prior advice for exercise (OR-3.397, 95% CI=2.035-5.671, p<0.001) were found as significant predictors for increased physical activity.
Conclusion: This study elaborates the need for awareness regarding possible barriers when counseling T2DM patients. Exercise remains one of the cheapest pillars of DM management, the benefits of which extend beyond glycemic control. However, as this study illustrates about 60% of patients with T2DM do not carry out the recommended exercise. This study also highlights the importance of physician advice regarding exercise. Behavioural causes seem to be the commonest barrier to exercise and hence strategies to target the same needs to be thought of.

Diabetes Mellitus has assumed epidemic proportions with current prevalence estimated at 9% of which India has a staggering 66 million cases [1, 2]. Despite several medications currently available, lifestyle changes including exercise and diet remains the cornerstone of diabetes management. Exercise regimens have been associated with a reduction in HbA1c of at least 0.66% in type 2 diabetes patients in spite of unchanged BMI [3]. According to ADA/AESD guidelines, patients at risk, pre-diabetics or under treatment would significantly benefit from at least 150 min/week of moderate physical activity such as walking [4]. Unfortunately, many patients do not do the required amount of exercise. This may partly be due to lack of knowledge or a result of absence of physician’s advice in addition, there may be multiple disparate barriers to this quintessential self-care behavior in diabetes [5].

Studies aimed at finding these barriers to exercise are scarce, especially in the Asian subcontinent. Moreover, most of the available studies have targeted a small population of patient with DM [6]. With that in mind, this study was devised with a goal to describe the possible barriers to exercise, in an Indian context.

Consecutive patients attending diabetes clinic in the hospitals were approached and briefed about the study. Following written informed consent, willing candidates fulfilling our criteria were interviewed by diabetes care providers using a structured questionnaire available in English, Bengali and Hindi (Annexe-1). The questionnaire was devised from but not limited to a systematic review of similar studies tailoring it to circumstances relevant to our regional population [6]. They were offered 23 direct questions on possible barriers to exercise. The responses were grouped into 5 categories viz. (i) Environmental (4 question) (ii) Behavioral (9 question) (iii) Occupational (2 question) (iv) Physical Inability (7 question) (v) Medical reasons (1 question)

Descriptive statistical analysis has been carried out in the present study. Significance is assessed at a level of 5%. Multivariate binary logistic regression was performed to find out the different independent predictors for not performing exercise after adjustment of other variables.

A total of 1061 patients were included in our study. The demographic and patient profile are shown in (Table1). The data on recent (within 3 months) HbA1C, Fasting Blood Sugar and Post Prandial Blood Sugar were available in only 624, 935 and 793 patients respectively. 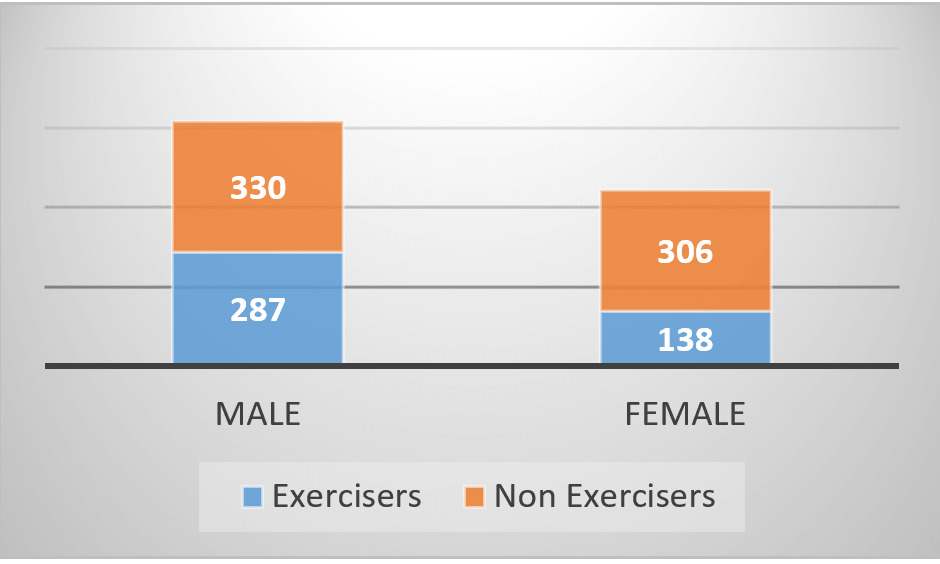 Irrespective of the various age groups, duration of diabetes, insulin uses and presence of hypertension, approximately 60% were not exercising as highlighted in (table 2). 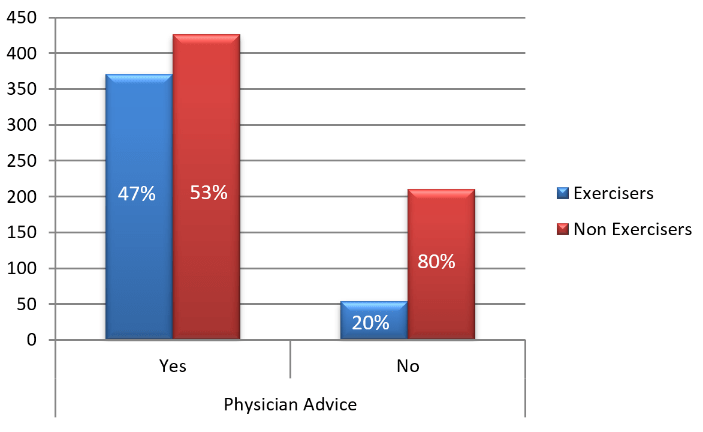 Patients who did not exercise ranked three commonest barriers to exercise applicable to them from 23 available options. It is to be noted that the respondent choice ranged from none to five in order of importance. All available responses were pooled together and grouped into 5 broad categories as outlined above. The pooled data is presented in (Table 3).

Table 3: Two most common barrier group with respect to gender, age, duration of DM and Insulin use

Table 4: Barriers with respect to gender, age, duration of DM and Insulin use 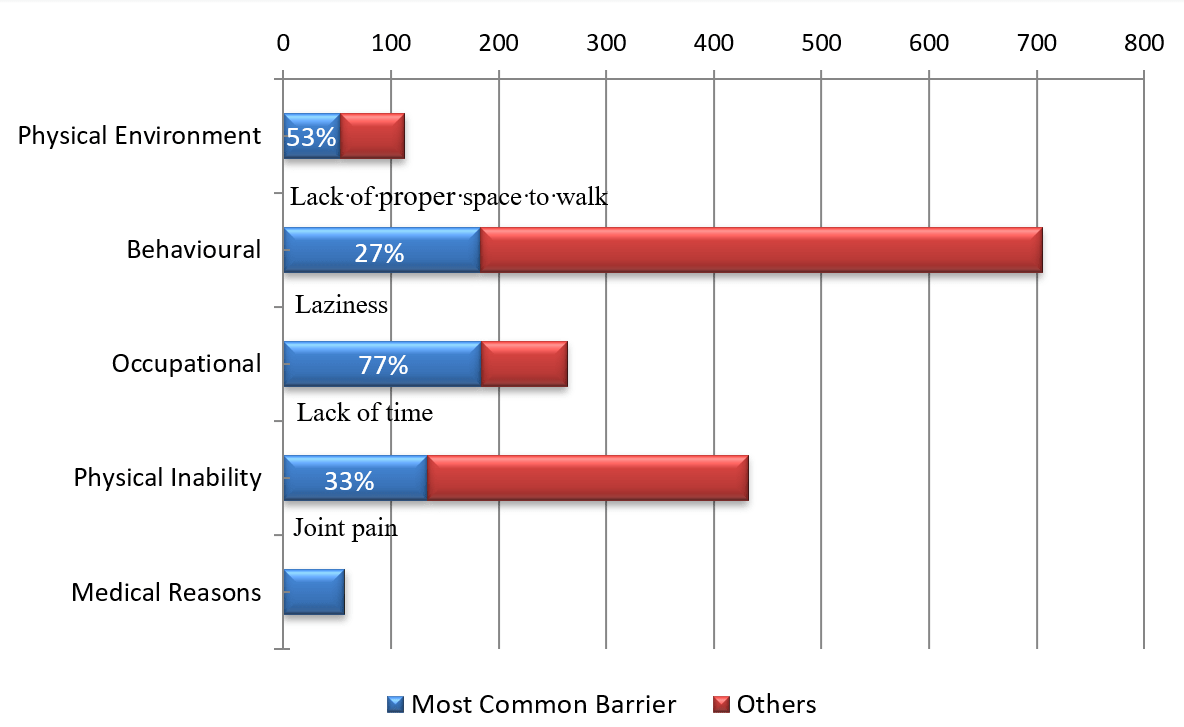 Figure 3 : shows the distribution of Barrier groups and the most common barrier in that group.

The most cited barrier as the primary reason was again, difficulty to manage time for completing the recommended exercise (20%), followed by laziness/ (14%), joint pain (12%), medical reasons (9%) and joint pain (7%). The detailed break-ups are given in (Table 4) and (Figure 3).

Table 5: Multivariate logistic regression analyses of the presence of exercise as the dependent variable in our study subjects with type 2 diabetes

Although studies highlighting barriers to exercise in T2DM come up from time to time, to our knowledge this is one of the largest studies addressing the barriers to exercise in T2DM patients. Approximately 40% of the population was getting recommended exercise. In fact, about 60% patients were not exercising irrespective of their differences with respect to irrespective of age, duration of DM, Insulin or anti-hypertensive drug use. The percentage was higher among females (68.91%) and insulin users (65.52%).While inability to manage time for exercise, the most commonly cited reason (184 out of 1061) overall, belonged to the occupational group, it was the behavioral barriers that were cited more frequently (705 times). Behavioral barriers remained the most frequent barrier amongst gender, age group, duration of DM and Insulin use sub-groups. Interestingly, joint pain was cited most frequently among the females (87 out of 444) and elderly population chose laziness (77 out of 399) as the primary cause as opposed to not managing time in rest of the groups.

The present study is the first of its kind to enlighten on the perceived barriers to exercise in the Indian population. Our study results confirm that physical activity levels are low in the Indian T2DM diabetes population, with only 40.1% of patients performing physical activity as per the recommended standards. A large proportion of patients, particularly the female patients are not exercising to meet the minimum standards as per the current recommendations. In a published study by Thomas et al., which studied both type 1 and type 2 diabetes patients, only a meager 34% of patients were found to perform physical activity [7]. In addition, the authors observed a greater tendency for weight gain in inactive patients with T2DM, but in direct contrast to the findings from our study, the difference was not statistically significant. It is worth mentioning that the BMI of the physically active cohort in our study was significantly lower than the physically inactive individuals, specifically in the females but not in males. In this regard, the results of our study are in line with the previous study findings and it reveals no improvement than the UK and US based studies published ten to twenty years ago [8, 9].

One of the significant findings of our study is the remarkable benefits with regards to weight and glycemic profile observed only in the females but not males, even though significantly higher proportion of males were physically active than females. Reported barriers to physical activity were diverse in our patients but lack of time, lack of motivation, tiredness, joint pain and poor sleep were the commonest reported major barriers to exercise, and are, therefore, the main issues that needs to be addressed when seeking to enhance exercise levels in our study population. A previous study by Mier et al. in Mexican American subjects described similar common barriers to exercise namely lack of time, depression, physical pain [10].

In the similar theme, Dutton et al. tried to assess barriers to physical activity in preponderantly low-income African American T2DM subjects. As the case in our study, the most common barriers that were reported included pain and lack of time [11]. The associations we came upon between patient demographics and other patient related factors and the specific barriers to exercise reported were interesting and have the potential to allow for a tailored approach to improving adherence to exercise guidelines. Based on our results, we also recommend that patients should specifically avoid doing exercise in an empty stomach and if they do so, they must have an immediate source of carbohydrate to tackle any eventual hypoglycemia.

Another interesting finding from our study is the fact that physical activity is significantly lower among the insulin users due to the perceived fear of hypoglycemia. Hence, this patient subgroup should be trained to manage hypoglycemia when it is mild or moderate and if severe, a detailed instruction should be given. They should be educated regarding self monitoring of blood glucose, carrying glucometer when required and have an immediate source of carbohydrate while exercising. The most significant finding from our study is the fact that treating physician’s advice for exercise was positively associated with performing exercise (46.5% of patients vs. 20.5% without advice performed exercise as per the current standards; P <0.001).

I Limitations of the present study

The drawback of this study includes the fact that most of the patients were from an urban/semi urban area, therefore lacking representation from rural areas. All the patients did not have HbA1C done at the time of survey and hence correlation of exercise with good glycemic control could not be done.

II Strength of the present study

On the other hand, the interview-based design ensured more complete response for this study. Participants were offered the chance to discuss the questionnaire with the care providers before they filled in the form. This gave the educators and physicians a chance to integrate the study within the scope of their routine counseling and identify those who did not exercise, particularly clarifying recommendations. Absence of a validated questionnaire prompted us to select the barriers from existing literature and modifying them to our local population. This emphasizes the need of such a tool in evaluating the barriers in subsequent studies.

This study elaborates the need for awareness regarding possible barriers when counseling T2DM patients. To the best of our knowledge, this is the largest study enumerating the barriers to exercise in patients with T2DM. Exercise remains one of the cheapest pillars of DM management, the benefits of which extend beyond glycemic control. However, as this study illustrates about 60% of patients with T2DM do not carry out the recommended exercise. This study also highlights the importance of physician advice regarding exercise. Behavioral causes seem to be the commonest barrier to exercise and hence strategies to target the same needs to be thought of.

© 2019 S. Majumdar. This is an open-access article distributed under the terms of the Creative Commons Attribution License, which permits unrestricted use, distribution, and reproduction in any medium, provided the original author and source are credited. Hosting by Science Repository. All rights reserved.
DOI: 10.31487/j.JDMC.2019.01.01


Table 3: Two most common barrier group with respect to gender, age, duration of DM and Insulin use


Table 4: Barriers with respect to gender, age, duration of DM and Insulin use


Table 5: Multivariate logistic regression analyses of the presence of exercise as the dependent variable in our study subjects with type 2 diabetes

Figure 3: shows the distribution of Barrier groups and the most common barrier in that group.