This case represents the unique occurrence of supratentorial dissemination of medulloblastoma in the absence of overt cerebellar disease. The authors present the case of a 64-year-old man who presented with headaches and intractable nausea with imaging abnormality seen only in the bilateral caudate. Follow-up imaging studies revealed a cerebellar lesion later confirmed by biopsy to be medulloblastoma. Subsequent biopsy of the originally evaluated caudate lesion demonstrated histologically identical medulloblastoma. Medulloblastoma should be considered in cases of supratentorial masses of unclear origin and should prompt careful inspection of the posterior fossa.

Medulloblastoma is a highly malignant subtype of embryonal tumor made of primitive undifferentiated cells [1, 2]. While it is the second most common central nervous system malignancy in children comprising 15-20% of all pediatric brain tumors it comprises only 0.4-1.0% of adult brain tumors [3-8]. Headache, nausea, and vomiting are frequently the most common presenting symptoms; however, in older children and adults, ataxia can also occur [2].

We present the unique case of a 64-year-old adult man with headaches and intractable nausea, with an MR signal abnormality in bilateral caudate heads without apparent infratentorial disease. Biopsies later demonstrated these lesions to be medulloblastoma after development of obvious cerebellar disease. To our knowledge, this is a unique presentation of medulloblastoma that reflects an uncommon but important pattern of disease spread.

A 64-year-old man with a one-year history of intermittent nausea, vomiting, and progressive weight loss presented to our hospital for evaluation. Over the past two months, his wife noticed he was more confused and had difficulties falling to one side. Subjectively, he complained of dizziness.

He was initially evaluated by his local gastroenterologist for nausea, vomiting, and weight loss, which led to the diagnosis of idiopathic gastroparesis. It was felt that this gastroparesis had led to malnutrition and Wernicke's encephalopathy. His nausea and vomiting recurred requiring hospitalization for dehydration and at one point placed on total parenteral nutrition for 3 months. Neurologic consultation was obtained for his increasing confusion and ataxic symptoms and MR imaging was obtained that demonstrated bilateral FLAIR signal intensity of the caudate head. The local neuroradiologist had attributed this finding to small vessel ischemic disease without other abnormality (Figure 1). 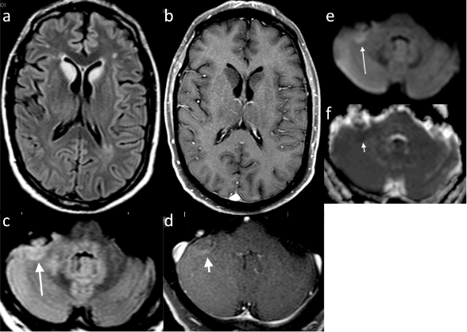 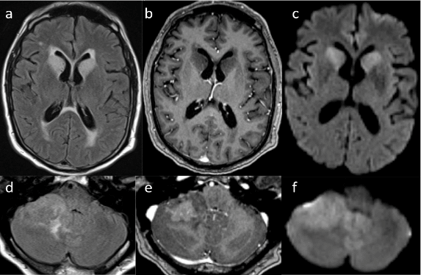 One week prior to presentation, he was diagnosed with pancreatitis and cholecystitis and underwent laparoscopic cholecystectomy with subsequent discharge to a rehabilitative hospital for further treatment. The patient's neurologic symptoms continued prompting MR imaging that revealed a right-sided cerebellar lesion, fourth ventricular effacement, and redemonstrations of the high signal intensity of the bilateral caudate heads on FLAIR sequences (Figure 2). These findings led to referral to our center for further management recommendations. Upon our evaluation, his exam was significant only for slight right-sided dysmetria. Otherwise, routine neurologic examination was unremarkable. A CT scan of the chest abdomen and pelvis was obtained as part of a metastatic workup and found to be unremarkable for evidence of primary neoplasm.

The patient underwent a retrosigmoid burr hole biopsy with image guidance. He was positioned semi laterally with head turned to the left. After dural opening, an image-guided biopsy needle was inserted into the cerebellar mass and multiple biopsies were obtained.

After the initial biopsy, the patient was discussed at the University of Iowa multidisciplinary neuro-oncology as to whether or not there would by any benefit of performing a more extensive resection operation of the cerebellar mass. Given the concern for metastatic tumor in the bilateral caudate nuclei and hydrocephalus, the patient subsequently underwent biopsy of the right caudate head under image guidance and ventriculoperitoneal shunt placement.

Biopsies taken from the cerebellar mass showed brain parenchyma diffusely infiltrated by hypercellular sheets of medium- to large-sized monomorphic tumor cells with ovoid nuclei, speckled chromatin and synaptophysin-positivity by immunohistochemistry (Figure 3A, 3B). Rare reticulin-free pale islands of tumor surrounded by reticulin-rich desmoplastic areas were consistent with a desmoplastic/nodular medulloblastoma, WHO grade IV. 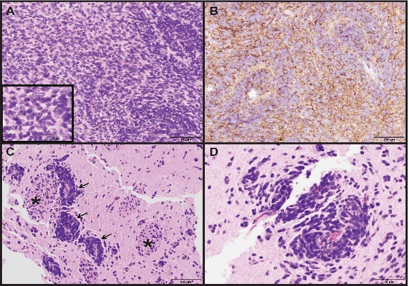 Pathology from the caudate head was similar to the cerebellar tumor with medulloblastoma tumor cells infiltrating the striated gray and white matter of the caudate with a predilection for perivascular organization (Figure 3C & 3D). This is thought to represent metastatic medulloblastoma, WHO grade IV. MRI of the spine did not reveal any apparent spinal lesions to suggest additional metastases.

The patient was evaluated by medical and radiation oncology who recommended whole cranial irradiation followed by focal irradiation to local disease as the standard treatment of craniospinal irradiation with concurrent chemotherapy to metastatic medulloblastoma was limited secondary to his age and performance status [11]. He underwent whole brain radiation therapy to 36 Gy followed by a boost to his local intracranial disease to 55.8 Gy. During his radiation treatment course, he became delirious that was suspected to be due to long term dexamethasone use, for which he was initiated on haloperidol with gradual recovery. To decrease his total number of treatments, his daily whole brain radiation dose was increased to 21.6 Gy over 12 fractions with another local boost to 45.6 Gy/20 fractions. After discussions with the patient and his family, he was discharged to home with hospice, as he did not want chemotherapy with its associated side effects.

Medulloblastoma is uncommonly encountered in adults [12]. Its incidence peaks at age 0-4 with declining incidence in the 10-14, 20-34 and 65-74 age groups [13]. It predominantly affects males, with one series showing 8 in 10 patients were male typically no older than 40 years of age [14, 15]. Symptoms are consistent with elevations in intracranial pressure and consist of nausea, vomiting, and headache, and duration typically is less than 3 months although some report mean duration for as long as 6 months [16-18].

The WHO has described 4 histological subtypes: classic, large cell/anaplastic, desmoplastic-nodular, and medulloblastoma with extensive nodularity [1]. These subtypes have been associated with imaging characteristics on MRI with the classic type typically midline, homogenous and well circumscribed with low signal intensity on T1, minimally T2 bright, moderately bright on FLAIR and high signal restriction on DWI/ADC consistent with high cellularity [19]. Desmoplastic type is typically peripherally located in the cerebellum with avid contrast enhancement with high signal restriction; it also is associated with older age [20]. Large cell/anaplastic is the most malignant and has a more variable presentation, but typically is small with marked restricted diffusion and diffuse enhancement; leptomeningeal spread often is present [21].

More recently, molecular subtypes have been defined to provide more precise adjuvant anti-neoplastic therapy and to aid in prognosis [22]. There are 4 subtypes, 2 with defined molecular abnormalities: WNT, SHH, group 3, and group 4. WNT is associated with mutations in the CTNNB1 gene encoding Beta-catenin, a transcription factor that mediates cell-cell adhesion, and chromosome 6 deletions in more than 80% of pathologic samples [23, 24]. The WNT subtype accounts for only 10% of all cases and have the best prognosis with 5-year survival rate greater than 90% with gross total resection [23, 25]. They almost exclusively demonstrate classic histology and typically present in older children and adolescents [23].

SHH type is associated with all histologic subtypes, with classic and desmoplastic the most frequently identified [26]. Of note, nearly all histologic desmoplastic or nodular subtypes are associated with the SHH group. Increased SHH activity is correlated with mutations in PTCH1, SMO, and SUFU and thought to be involved in upregulation of the SHH signaling cascade [11, 27-29]. 5-year survival is approximately 75% and metastatic dissemination occurs in 15-20% [30]. Consistent with the histologic anatomic localization, adults with SHH subtype are frequently observed in the cerebellar hemispheres [26, 31].

Group 3 has no identified cell signaling alteration, though nearly 1/3 demonstrate overactivation of oncogenes GFI1 and GFI1B and overamplification of MYC3 was seen exclusively with group 3; isochromosome 17q may also be seen in some cases [32]. Group 3 typically is associated with classic histology though large cell is seen in as much as 40% of cases [25]. Group 3 is almost always in infants and children is metastatic in 45% of cases with 5 year survival of approximately 50%, giving it the worst prognosis among all subtypes [24, 25, 33, 34].

Group 4 is associated most frequently with classic or large cell histologic type, and in 80% of cases, isochromosome 17q occurs and a mutation in the gene KDM6A, a histone demethylase, on the X chromosome may account for the 2-3 times male predominance of this subtype [24, 30]. MYC amplification may occur in less than 10% of cases [35]. Moreover, 30% of cases are associated with a mutation in cyclin dependent kinase 6 (CDK6), which is involved in cell cycle progression and differentiation[36]. Group 4 is the most common subgroup and is found in 50% of pediatric cases and 25% of adult cases [30]. Leptomeningeal metastases are common, occurring in up to 40% of cases [35].

Adjuvant radiation therapy following surgery is the standard of care for managing adult patients with average risk medulloblastoma. Reduced-dose CSI (23.4 Gy in 13 fractions) plus a boost to the posterior fossa (31.8 Gy in 17 fractions) with concomitant vincristine and adjuvant lomustine, vincristine, and cisplatin is a favored approach with careful monitoring of toxicities [38]. Although this study was conducted in patients between age groups 3 and 21 years, it showed an encouraging progression-free survival (PFS) rate of 86% at 3 years and 79% at 5 years that is comparable to full dose radiation therapy alone. CSI-associated morbidity in adults is comparatively less than children; hence full dose CSI (36 Gy in 20 fractions) and a boost to a total of 54 to 55.8 Gy to the primary brain site without chemotherapy is also a reasonable option in management of patients with average risk MB [39, 40].

Adult MB patients with high-risk disease (large cell or anaplastic medulloblastoma, supratentorial PNET, disease dissemination, unresectable tumors or residual tumors more than 1.5 cm2 post-surgery) are treated with standard dose CSI and posterior fossa radiation. The adjuvant chemotherapeutic regimens widely used are cisplatin or carboplatin and etoposide with or without cyclophosphamide as per a prospective study that reported 5-year PFS rate of 69% `and 5-year OS rate of 75% [41]. Chemotherapy is generally administered before CSI as it is better tolerated, because after CSI the incidence of hematological and neurological toxicity is higher. Collection of stem cells before radiation therapy could be considered for potential future autologous transplant at disease progression.

In the setting of recurrence, etoposide, temozolomide or high dose chemotherapy with autologous stem cell transplant are all viable options [42-46]. Vismodegib, a small molecule inhibitor of Smoothened (SMO) has shown promising activity in recurrent or refractory medulloblastoma with sonic hedgehog mutations that constitute 80% of adult medulloblastoma patients [47, 48]. A current trial is underway testing this therapy as front-line treatment (NCT01878617).

Metastases of medulloblastoma frequently occur by CSF dissemination, of which the most well-known are the drop metastases of the cauda equina described as "sugar coating" for their nodular appearance. Hematogenous spread is quite rare now that systemic chemotherapy has been added as the standard of care [49]. One phenomenon reported in the literature is that of primary leptomeningeal medulloblastoma first described by Ferrara et al., where there was widespread dissemination in the subarachnoid space of the posterior fossa without a true mass lesion identified [50]. Additionally, there have been reports of supratentorial spread of medulloblastoma, which has been documented to occur in the sub frontal region, cribriform plate, occipital pole, and dissemination through the ventricular system [51-55]. However, after a thorough review of the literature, our case appears to be the first reported where the MRI findings in the caudate head were more apparent than the primary mass lesion in the lateral aspect of the cerebellum on initial imaging.

• Medulloblastoma can have supratentorial dissemination in the absence of overt cerebellar disease.
• Medulloblastoma metatatic disease can appear with high FLAIR signal without significant contrast enhancement.
• Lesions suspicious for supratentorial metastatic disease especially adjacent to the ependymal space should prompt detailed inspection of the posterior fossa when a primary oncologic source is not identified.
• Medulloblastoma has 4 histological subtypes and 4 molecular subtypes.
• Adjuvant chemotherapy may be considered to post-surgical craniospinal radiation.

© 2019 Scott Seaman. This is an open-access article distributed under the terms of the Creative Commons Attribution License, which permits unrestricted use, distribution, and reproduction in any medium, provided the original author and source are credited. Hosting by Science Repository. All rights reserved.
DOI: 10.31487/j.AJSCR.2019.01.08