Acute Pancreatitis in Child with Relapsing Hepatitis A Viral Infection

Viral A hepatitis is a self-limited infection occurring predominantly among children usually as an anicteric often subclinical illness. Although hepatitis viruses have a strong tropism for hepatocytes, viral antigens have also been detected in other tissues such as pancreas and gallbladder [1-3]. Several viral infections have been implicated as an etiological factor of acute pancreatitis. The viruses most frequently responsible are the mumps virus, Coxsackie B virus, Epstein Barr virus [1-3]. Acute pancreatitis has been reported very rarely in acute non fulminant viral hepatitis [4-6]. The objective of this report is present a patient with acute pancreatitis associated with acute hepatitis caused by hepatitis A virus (HAV) not at in acute phase, who made a satisfactory recovery. 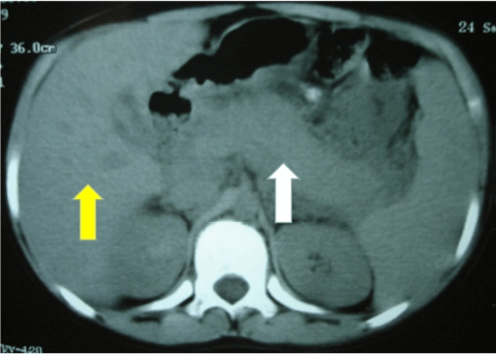 Treatment was with fluid and electrolyte replacement. Pain ceased eight days after admission. He regained his appetite three days after. On discharged AST was 211 U/L, ALT 209 U/L, serum amylase 135 U/dL, serum lipase 115 U/dL, bilirubin: 7,4 mg/dL (normal – 0.2–1.2) (Conjugated – 4, 5), alkaline phosphatase 157 U/L, GGT 286 U/L. The patient had normal exams eight weeks after the diagnosis, and until today he didn’t have any disease or relapse. The diagnosis of pancreatitis in our patient was based on clinical features of vomiting, severe abdominal pain, CT abdomen evidence of pancreatitis, elevated serum amylase and lipase and lack of other recognizable abdominal disease.

The mechanism of pancreatitis in patients with acute viral hepatitis (non-fulminant) is unknown and it may be multifactorial. One proposed pathogenesis of pancreatitis associate with hepatitis is the development of edema of the ampulla of Vater with obstruction to the outflow of pancreatic fluid [3]. There is no direct evidence for the routes by which hepatitis viruses reach the pancreas; however, the proposed routes are most likely blood or bile. A more plausible mechanism for viral associated acute pancreatitis acinar membrane is direct inflammation and destruction of pancreatic acinar cell by the virus [12]. Acute pancreatitis occurs in 5,65% of patients with acute viral hepatitis, it is mild and recovers with conservative management [4]. Prolonged cholestasis and relapsing hepatitis are well described [13, 14]. Cholestasis will spontaneously resolve but may predispose the patient to develop a relapse of the hepatitis. A biphasic or relapsing form of viral hepatitis A occurs in 5 to 20% of cases [13, 14]. The initial episode lasts 3 to 5 weeks and is followed by a period of remission characterized by normal liver chemistries lasting 4 to 7 weeks. Relapse may mimic the initial episode of the acute hepatitis, that may be the cause of acute pancreatitis in our patient.

The patient had a mild to moderate pancreatitis without any local systemic complication and had uneventful recovery from both hepatitis and pancreatitis, with six and eight weeks after the admission respectively. However, laboratory findings were normal in some 5 to 10 days in other cases [4-8] in pancreatitis, our case need more time to recover, but hepatitis laboratory findings was similar recovery. We did not find any correlation of pancreatitis and or hyperamylasemia and hyperlipasemia to either bilirubin, AST/ALT levels like others that was found by Parbhoo et al. [4-9, 11]. The etiology of pancreatitis was considered to be due to a hepatitis virus inasmuch as there was no evidence of gallstone, alcoholism, drugs, trauma or metabolic causes. Although biliary microscopy was not performed, the fact that there was no recurrence of pancreatitis and no development of gallstone/sludge on follow up (36 months) exclude biliary microlithiasis as a possible etiology.

© 2021 Álvaro Pimenta Dutra. This is an open-access article distributed under the terms of the Creative Commons Attribution License, which permits unrestricted use, distribution, and reproduction in any medium, provided the original author and source are credited. Hosting by Science Repository.
DOI: 10.31487/j.JCMCR.2020.02.04