The salivary glands are the site of origin of a wide variety of benign and malignant neoplasm. The histopathology of these tumours are said to be the most complex and diverse of any organ in the body. About 80% of them arise from parotid, 10% from submandibular and remaining from minor salivary gland. Pleomorphic adenoma or mixed parotid tumour is the commonest tumor of the parotid and Warthin’s tumor is the second commonest. They constitute about 2% of all head and neck neoplasm. The initial description of the tumour goes back to Hildebrand in 1895, who considered this as a variant of congenital epithelial cyst of the neck. In 1910, Albreccht Arzt reported two tumours of the upper neck region which they interpreted as ‘confused tissue’ in the endodermal pharyngeal derivatives in the lymph node. They called them papillary cystadenoma of lymph nodes.

In the WHO classification of tumour, the disease was named Warthin’s tumour after the pathologist who published first two cases in American literature in 1929. He named the tumour papillary cysadenoma lymphatosum. The term Warthin’s tumour was chosen later in order to avoid confusion with malignant lymphoma[1, 2]. The great majority of these tumours occur in the lower pole of the parotid gland. Only 6-10% cases are reported outside the parotid. The extra-parotid locations are cervical lymph node, submadibular gland and larynx. These extraparotid location of these tumour has clinical significance rather than the common occurrence of the tumour in the parotid gland [3]. This is a benign tumour. Malignant transformation is rare. Local recurrence is also rare after surgical excision [4].

A 7-year-old boy presented with a painless swelling over the right side of the neck for 1 year. The swelling was located over the right submandibular area. On examination the swelling was ovoid, non-tender, no pulsatile, the surface was smooth with soft to firm consistency. On bi-manual palpation the swelling was found to be arising from submandibular gland. No calculus was palpable. Right submandibular gland was completely excised. Lingual and hypoglossal nerves were preserved. The gland was found to be having lobulated surface (Figure 1). The tumour involved the whole gland as the gland size was increased by many folds. 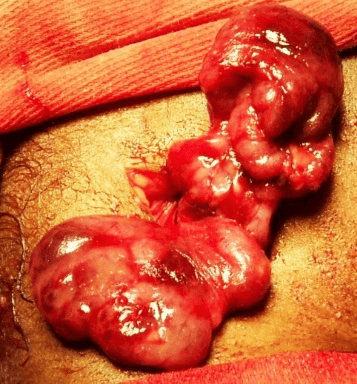 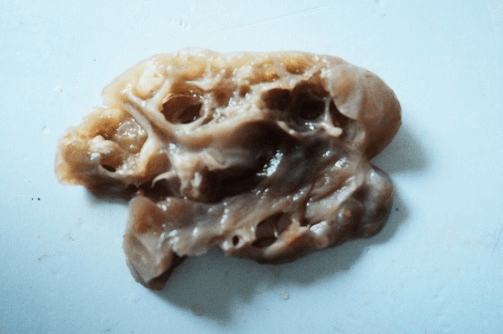 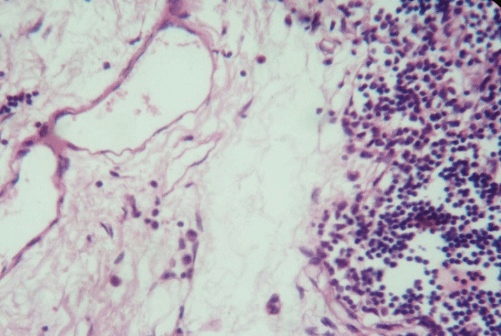 Warthin’s tumour commonly presents as slow growing round or oval mass in the parotid gland usually at 4th to 7th decade of life [5]. These tumours mostly occur in white men. A great majority of patient have history of smoking [6]. Grossly, Warthin’s tumour possesses smooth lobulated surface and thin but tough capsule. The diagnosis is obvious just by the appearance of the cut surface of the tumour. Multiple cysts of varying diameter containing viscous dark brown “machinery fluid” are seen. The lymphoid components make up the solid area of the tumour. The pathognomonic microscopic features are epithelial cells forming papillary projections into the cystic spaces in the background of lymphoid stroma. Various theories have been put forward to explain the development of Warthin’s tumour, only two have ultimately remained. The first is the hypothesis of heterotopias.

The second is the theory that the tumour is an adenoma with lymphocytic infiltration. The first theory says that the tumour develops due to salivary gland heterotopias in periparotid and intraparotid lymph nodes. During embryogenesis of the parotid gland epithelial cells from the oral mucosa happen to penetrate the lymphoid rich tissue. Later the parotid gland gets encapsulated. According to this theory Warthin’s tumour develop in this epithelial inclusion [7]. The extraparotid locations and multicentric nature of these tumour can be explained by the last-mentioned hypothesis, where the adenoma is subsequently infiltrated by lymphocytes probably as a result of inflammatory and immune response evoked by the tumour [8].

© 2021 Sardar Rezaul Islam. This is an open-access article distributed under the terms of the Creative Commons Attribution License, which permits unrestricted use, distribution, and reproduction in any medium, provided the original author and source are credited. Hosting by Science Repository.
DOI: 10.31487/j.ACO.2020.01.04