Obturator hernias are rare but pose a diagnostic challenge with relatively high morbidity and mortality. Our patient is an elderly, thin female with an initial evaluation concerning for gastroenteritis, and further evaluation revealed bilateral incarcerated obturator hernias, which confirmed postoperatively as well as a right femoral hernia. An 83-year-old female presented to the outpatient office initially with one-day history of diarrhea and one-week history of episodic colicky abdominal pain. She returned 4 weeks later with diarrhea resolved but worsening abdominal pain and left inner thigh pain while ambulating, without changes in appetite or nausea and vomiting. Abdominal CT scan then revealed bilateral obturator hernias. Patient then presented to the emergency department (ED) due to worsening pain, and subsequently underwent hernia repair. Intraoperatively, it was revealed that the patient had bilateral incarcerated obturator hernias and a right femoral hernia. All three hernias were repaired, and patient was discharged two days later. Patient remained well postoperatively, and 15-month CT of abdomen showed no hernia recurrence.

An 83-year-old female with past medical history of hypertension and hyperlipidemia presented to the clinic with a one-day history of watery diarrhea and one-episode of severe colicky left lower quadrant (LLQ) abdominal pain a week prior to presentation and then resolved. Her social history was uncontributory except that she recently came back from foreign travel. The patient denied any fever, nausea, vomiting, or changes in appetite or weight. The vital signs were all within normal limits and patient was in no distress. The only abnormal findings on physical exam were mild tenderness with palpation on the LLQ of abdomen and no guarding or rebound. There were no palpable mass or signs of hernias. An abdominal ultrasound was ordered, and the patient was counselled to go to the ED if her symptoms worsened. Due to the recent onset of symptoms at the time and also right after foreign travel, it was postulated that her symptoms were likely due to gastroenteritis as a result of food intake. Of note, the patient had a BMI of 17 and was multiparous. She had a surgical history of hysterectomy and unilateral oophorectomy many years ago.

The patient obtained an ultrasound 2 weeks later, which was unremarkable, but the left lower quadrant exam was limited due to bowel gas. Patient was called who complained of more episodes of LLQ pain, thus subsequently underwent CT of the abdomen/pelvis with contrast that revealed bilateral obturator hernias. The left hernia contained part of the sigmoid colon, and the right hernia contained part of the bladder (Figures 1 & 2). Patient was then called into office about 4 weeks after initial presentation. During this visit, she complained of worsening abdominal pain in the LLQ, now extending to the left inner thigh, which made it difficulty ambulating. She denied changes in appetite, nausea and vomiting, and was still having normal daily bowel movements. Again, no masses or hernias were appreciated on exam and all vital signs were normal and patient was in no acute distress. Patient was referred to a general surgeon and advised to go to the ED if the pain became severe or persistent. 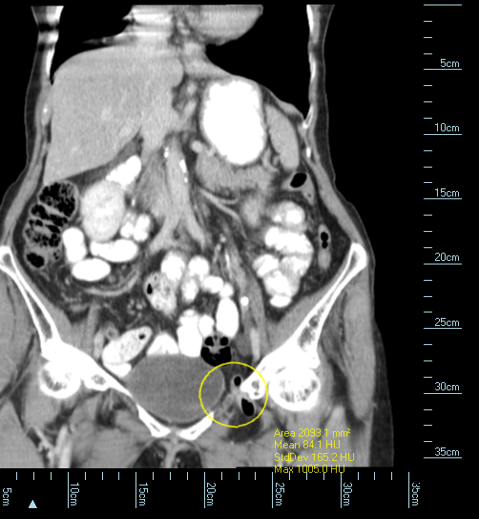 Patient presented to the ED the same day after office visit due to worsening of the abdominal pain. Patient remained afebrile with stable vital signs. Her laboratory values were unremarkable, with the exception of an incidentally discovered urinary tract infection. A repeat CT in ED without contrast revealed a small left obturator hernia containing a portion of distal descending/sigmoid colon. General surgery was consulted, and patient underwent hernia repair three days later during the same admission. Intraoperatively, patient was found to have bilateral incarcerated obturator hernias, with sigmoid colon on the left and bladder on the right. She also had a right femoral hernia. Robotic plug mesh repair was completed for the obturator hernias and primary repair for the femoral hernia without complications. Patient was discharged two days later in stable condition. Patient followed up in office one week later tolerating the surgical herniorrhaphy well. Repeat CT scan of abdomen 15 months post-op showed no hernia recurrence.

Based on published data, obturator hernias are exceedingly rare. According to a 15-year study at the Mayo Clinic, they made up 0.073% of all hernia repairs. [1] Classically, they occur in elderly, thin, multiparous women, presenting as intestinal obstruction [1, 4]. Nasir et al published a review of 30 patients who underwent obturator hernia repair at the Mayo Clinic in a 50-year span [4]. The study found that 63% patients initially presented with bowel obstruction symptoms of nausea, vomiting, 57% presented with abdominal and groin pain, 37% with the Howship-Romberg sign (medial thigh pain upon internal rotation), and 10% with a palpable mass. Other studies suggest that 90% of cases present in acute mechanical bowel obstruction [5]. Prompt diagnosis is paramount as delays can result in strangulation and raise morbidity and mortality [5]. Femoral hernias are also rare, though more common than obturator hernias. They represent approximately 5-10% of all groin hernias in adults [3]. It is also a condition more common in elderly women [2]. The presentation is also non-specific, commonly groin discomfort [2]. Moreover, it is difficult to differentiate between a femoral and inguinal hernia on exam. However, femoral hernias have a 22% chance of strangulation 3 months after diagnosis, and 45% 21 months after diagnosis, as opposed to the 3% and 4.5% in inguinal hernias [6]. Hence, groin hernias in females should be promptly referred to a general surgeon.

The patient in the case report had the risk factors for both obturator and femoral hernias. She was elderly, thin with a BMI of 17, and multiparous. However, she did not present with intestinal obstruction symptoms although her bilateral obturator hernias were incarcerated. She had no palpable mass despite the right femoral hernia seen intraoperatively. She initially presented with vague symptoms of mild diarrhea, and episodic colicky LLQ pain, without nausea or vomiting. Subsequently she did also develop the inner thigh pain that made her ambulating difficult (Howship-Romberg sign) about a month after the initial presentation. She experienced a positive outcome because of the prompt diagnosis and adequate patient counselling. The patient was asked to report to the emergency department with worsening pain and doing so likely prevented her hernias from progressing to strangulation. Subsequently, the patient was able to have her hernias repaired without bowel resection. This case is a lesson in the importance of investigating vague symptoms in the primary care setting when patients have the risk factors for obturator and femoral hernias. Patient education on when to seek emergency treatment is also paramount. Though rare, these hernias can have dire consequences for frail, elderly patients when they progress to strangulation.

© 2019 Jinping Xu. This is an open-access article distributed under the terms of the Creative Commons Attribution License, which permits unrestricted use, distribution, and reproduction in any medium, provided the original author and source are credited. Hosting by Science Repository. All rights reserved.
DOI: 10.31487/j.JSCR.2020.01.03