Laryngeal and tongue squamous cell carcinomas account for an estimated 37,000 cases and 7,000 deaths/year in the U.S. The localized lesions are generally treated by surgical resection, and/or radiation therapy. When progression to metastases occurs, a systemic chemotherapy is necessary. An efficacious medication has not been available; largely due to the absence of information regarding the development and progression of those malignancies. Consequently, potential targets for successful chemotherapy are not identified. Since decreased zinc has been implicated in the development and treatment of all other carcinomas, it likely exists in laryngeal and tongue squamous cell carcinomas. This report demonstrates that zinc is decreased in these malignancies when compared to the normal cells; and is likely due to the downregulation of their functional ZIP-family zinc-uptake transporter. The reason is that the higher zinc level in the normal cells is cytotoxic in the malignant cells. Therefore, a chemotherapy that restores the higher zinc levels will be cytotoxic in the malignant cells. To achieve this, we employed clioquinol zinc ionophore to facilitate the uptake and accumulation of zinc. The treatment inhibited proliferation of HN4 laryngeal carcinoma cells and HN6 tongue carcinoma cells. That is consistent with other reports that collectively demonstrate that all carcinomas are “ZIP-deficient/decreased zinc” malignancies; and can be terminated by a treatment, such as clioquinol, to facilitate the uptake of cytotoxic levels of zinc. It is now necessary to establish the efficacy of the clioquinol treatment for human laryngeal and tongue tumors under in vivo conditions in xenograft implants in animals; and ultimately in human clinical trials. A case report of the first successful treatment of a patient with terminal advanced prostate carcinoma had included clioquinol. It is reasonable to expect that clioquinol treatment could be the first chemotherapy for terminating tongue and laryngeal squamous cell carcinomas.

Laryngeal squamous cell carcinoma accounts for about 12,000 cases and 3,700 death/year in the U.S. [1]. Tongue squamous cell carcinoma accounts for about 17,000 cases and 3,000 deaths/year. The primary site malignancy will progress to nearby tissues; and subsequently metastasize to adjacent lymph nodes; and invade other distant tissue sites. To prevent this, the localized lesions and adjacent lymph node are generally treated by surgical resection and/or radiation therapy; and often accompanied by chemotherapy; such as cisplatin, 5-fluorouracil, and docetaxel [2]. This treatment attenuates the localized malignancy; but does not terminate the progressing metastases at distant tissue sites, which is the major cause of the patient deaths.

Consequently, an efficacious systemic chemotherapy is essential, but does not exist, for the termination of these carcinomas. A major deterrent has been the absence of information regarding the factors that involved in the manifestation of these malignancies. Laryngeal and tongue carcinomas are among the group of most neglected and least published studies of all cancers. This is evident from a PubMed search that revealed about four relevant citations relating to “zinc levels, zinc transporter, and zinc treatment for laryngeal carcinoma”, and similarly for tongue carcinoma.

The Role of Zinc and Zinc Transporter in Carcinomas

Then the important issue is “how do the carcinoma cells prevent the accumulation of cytotoxic levels of zinc?” All normal cells possess a plasma membrane ZIP-family transporter (Slc39a), which is essential for their uptake of zinc from plasma. The ZIP transporter is downregulated in the carcinoma cells. All carcinomas for which the information is available are “ZIP-deficient/decreased zinc” malignancies.

The Zinc Ionophore, Clioquinol is an Efficacious Systemic Zinc Chemotherapy

It becomes evident that increasing the zinc levels in the carcinoma cells will result in cytotoxicity. This requires an agent that binds to zinc in blood plasma and transport the zinc into the “ZIP-deficient” malignant cells to induce its cytotoxic effects. The zinc ionophore, clioquinol, exhibited that capability in animals [5]. Based on that relationship, clioquinol was included for the treatment of advanced prostate cancer in patients, which exhibits decreased zinc [6].

Aliquots containing 11,500 HN4 cells or 12,000 HN6 cells suspended in 2.5% FBS DMEM medium were transferred to multiwell plates that contained physiological concentrations of zinc; and either 5µM or 10 µM clioquinol. The “Control” (placebo treatment) contained the clioquinol vehicle. The plates were maintained in a cell culture incubator for 48 hours. Cell proliferation was determined by the difference in the HN4 and HN6 cell count from zero time to 48 hours.

The results (Figure 1) showed that, in the absence of clioquinol, the cell count was not significantly different throughout the range of normal plasma zinc concentrations. However, for the HN4 and the HN6 cells, 5% clioquinol and 10% clioquinol exhibited 95% or greater inhibition of cell proliferation. This requirement for the zinc ionophore is consistent with the expectation that these squamous carcinoma cells are “ZIP-deficient/decreased zinc” malignancies; as exists for other carcinoma cells that have been reported [4]. 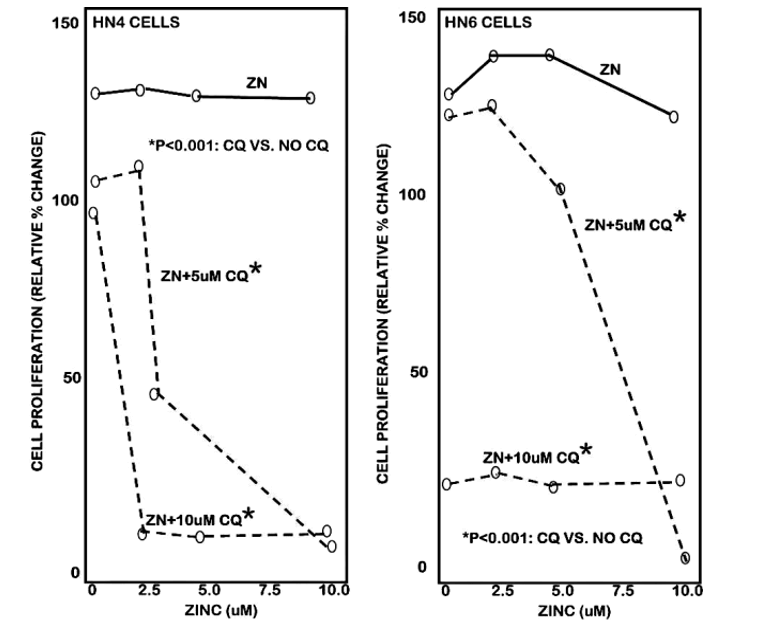 Figure 1: Effects of zinc and clioquinol on proliferation of HN4 and HN6 cells. The cells were treated for 48 hours.

The clinical issue is the efficacy of these in vitro effects when clioquinol is employed for the treatment of patients. Clioquinol treatment of nude mice with ectopic human prostate tumors results in 80% inhibition of tumor growth (Figure 2) [5]. That is the basis for our patient case report that involved clioquinol treatment (3% Clioquinol Cream). The clioquinol treatment prevented the progression of androgen-dependent prostate cancer malignancy [6]. That malignancy exhibits down regulation of ZIP transporter and decreased zinc. This demonstrates that the epidermal application of 3% Clioquinol Cream results in the transdermal absorption of clioquinol into blood plasma; which combines with zinc; the Zn Clioquinol is delivered to the malignant sites and transports zinc into the malignant cells to manifest its cytotoxic effects. It is reasonable to expect and propose the clioquinol chemotherapy will provide the first efficacious treatment for patients with terminal laryngeal or tongue carcinomas.

The authors express appreciation to Dr. Abraham Schneider, D.D.S., Ph.D. for providing the HN4 and HN6 cell lines employed in this report. Studies of LC Costello and RB Franklin cited herein were supported by NIH grants CA79903, DK076783, and DK42839.

LCC and RBF acknowledge that they have not received any financial interest or benefit that has arisen from the direct applications of our research.

© 2021 Leslie C. Costello. This is an open-access article distributed under the terms of the Creative Commons Attribution License, which permits unrestricted use, distribution, and reproduction in any medium, provided the original author and source are credited. Hosting by Science Repository. All rights reserved.
DOI: 10.31487/j.DOBCR.2020.05.02

Figure 1: Effects of zinc and clioquinol on proliferation of HN4 and HN6 cells. The cells were treated for 48 hours.