In this case a cervico facial cancer patient scheduled for tracheostomy followed by an endoscopy, and known to have a pacemaker, had hemodynamic instability at the start of general anaesthesia which lasted several hours. The anaesthetist in charge used the magnet to override the pace maker which did not respond. Indeed, it was a leadless pacemaker. These devices will be used more frequently and should be carefully scrutinized at the anaesthetic consultation.

In 2017, the prospective, nonrandomized LEADLESS trial received initial favorable data regarding the safety of a new dispositive: the leadless cardiac pacemaker LCP Consequently, anesthesiologists must acquire knowledge about those new disposals that are going to be more and more common in the operating room [1, 2]. However, there is currently only few substantial clinical data for guidelines and good practices concerning those specific internal devices [3, 4]. The clinician must therefore apply the guidelines for the perioperative management of any traditional pacemaker [5, 6]. We present a case involving a patient with a leadless pacemaker undergoing an ambulatory upper airways endoscopic procedure.

A 62-year-old man had to undergo a tracheostomy under sedation and local anaesthesia followed by pan endoscopic examination under general anaesthesia in order to explore an oral squamous cell carcinoma. He had medical history of hypertension and symptomatic bradycardia related to the tumor invasion of the carotid glomus. Therefore, a LCP device was implanted into the patient’s right ventricle few months before the current procedure.

At the time of the pre-operative anesthetic consultation, the anesthesiologist didn’t notice that the patient had a leadless device and he recommended usual guidance for a traditional pacemaker such as using only bipolar electrosurgery with short-duration electrosurgery bursts to minimize device interference and reprogramming the device to asynchronous (VOO) mode to minimize pacer oversensing, if clinically relevant [7].

In the operating room, the intraoperative monitoring showed that the patient was not pacing- dependent continuously but required random pacing. At the beginning of the procedure the patient was in sinus rhythm and thermodynamically stable as light sedation by remifentanil (TCI) was administered to maintain spontaneous ventilation and allow procedural sedation for a tracheostomy under local anaesthesia. Tracheostomy was performed successfully with additional local anaesthesia. Thereafter, general anaesthesia was initiated using TCI remifentanil and propofol for induction in association with sevoflurane for maintenance of anaesthesia. During the panendoscopy under general anaesthesia the patient showed hemodynamic instability with alternative paced and spontaneous rhythm. The anesthesiologist finally had to use boluses of norepinephrine in order to stabilize the patient hemodynamic which permitted to terminate the procedure.

After an hour, the patient was still catecholamine-dependent in the post anesthetic care unit. According to the guidelines concerning patient with pacemaker undergoing hemodynamics instability during the perioperative period, the anesthesiologist decided to use the magnet. But surprisingly, she was not able to find the pacemaker. The patient had a chest x-ray in order to find the pacemaker case and we finally discovered that the pacemaker implanted to the patient was a LCP. The magnet was therefore applied right above the heart and the patient, but the magnet was ineffective in rhythm control and hemodynamic stability, which was ultimately obtained several hours after spontaneously.

Traditional lead-based pacemakers have been evaluated thoroughly for perioperative safety, efficacy, and management. In France, the guidelines concerning perioperative management of the pacemaker were edited in 2009 and updated by European guidelines [5, 8]. The main point is about using the magnet for any situation that it at risk for electromagnetic interferences such as electric bistouri but also lithotripsy, radio frequency ablation, external electric shock, convulsive therapy, or even the use of a shaver. It also includes the use of a bipolar electric bistoury or the distance that should be at least 15 cm between the pacemaker and the bistouri deployment. Two leadless pace-makers (Medtronic Micra®[Medtronic, Minneapolis, MN] and the St. Jude Medical Nanostim® [St. Jude Medical, St. Paul, MN]) were commercially available initially [9, 10]. 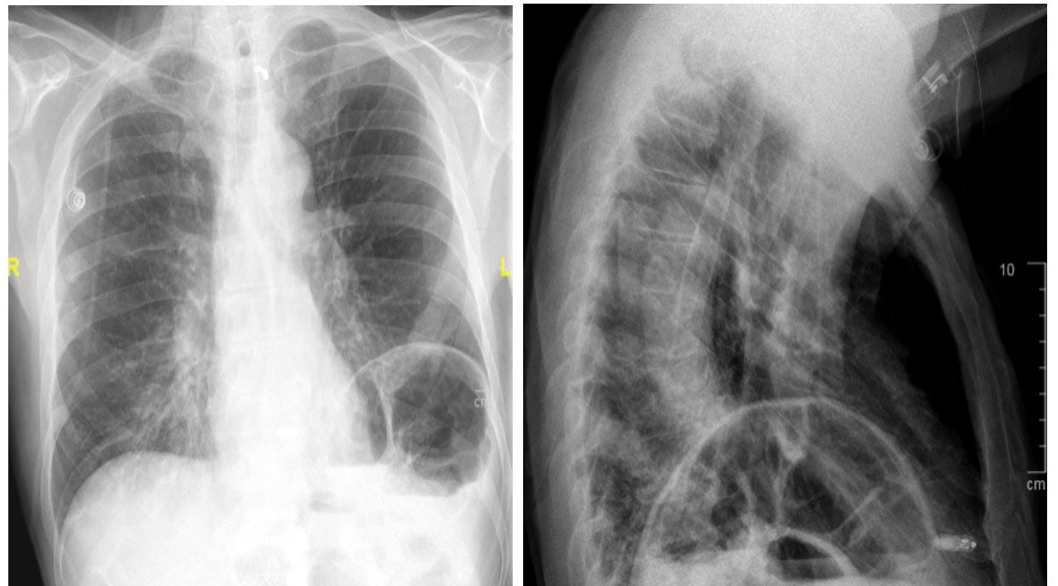 Figure 1: The leadless pacemaker is visible in the right picture (lower right).

Therefore, the leadless pacemaker is indicated in tachycardia- bradycardia syndrome or symptomatic–paroxysmal or permanent second- or third-degree AV block, bilateral bundle-branch block, or paroxysmal or transient sinus node dysfunction with or without an AV conduction disorder. The device is contraindicated in patients who have an inferior vena cava filter, mechanical tricuspid valve, as well as another implanted cardiac device that may interfere with leadless device function. Furthermore, a patient may not be a candidate if morbid obesity, if the femoral anatomy cannot accommodate introducer sheath, or if he had hypersensitivity to the medications used during placement including heparin and dexamethasone. The main limit encountered these devices is about device longevity [11]. In fact, the manufacturer of the Nanostim LCP had to stop because of inadvertent device or component failure and is no more implanted. For the patients who are pacing dependent and had a Nanostim pacemaker firstly implanted, they had to get implanted a second neighboring leadless device. The non-functioning one can be removed by percutaneous retrieval or surgical exploration.

Given the results from these trials and, the number of surgical patients reliant on these devices which may increase anesthesiologists need updated guidelines for their perioperative use. The management of this new device does not differ from the management of a traditional pacemaker, including the use of a magnet in case of electromagnetic interferences, at least for the Nanostim pacemaker. In fact, the magnet is not effective on the MICRA Medtronic pacemaker and there is a special control box that allows the practitioner to start the VOO mode that protects from interferences. It is then necessary to contact the Medtronic staff in order to get this specific box.

As medical technology progresses, leadless pacemaker devices likely will increase in clinical applications outside of bradyarrhythmias potentially phasing out conventional device. The endovascular implantation may offer a solution to traditional pacemaker concerns such as inherent procedural complications, post-procedure hematoma, infection, and MRI incompatibility. Given the lack of guidelines available for these new devices, early identification of patients with these devices in the preoperative period, specifically days or weeks before surgery may allow more time for device familiarization, interrogation if necessary, and avoidance of any surgical delay. Anaesthesiologists must seek out the information available (including the brand of the leadless pacemaker) as it has direct consequence for intraoperative management of leadless devices. For example, it can predict the effectiveness of the magnet if needed during the operation. Systematic investigations into these devices must be performed during preoperative anaesthetic consultation in the clinical setting to ensure safety for these patients in the perioperative period.

© 2021 Cyrus Motamed. This is an open-access article distributed under the terms of the Creative Commons Attribution License, which permits unrestricted use, distribution, and reproduction in any medium, provided the original author and source are credited. Hosting by Science Repository.
DOI: 10.31487/j.ACR.2020.01.04

Figure 1: The leadless pacemaker is visible in the right picture (lower right).