Axillary artery injury is a rare complication of blunt upper extremity trauma and is reported in the literature on only a few cases. The usual treatment is an open operation with the exclusion of the aneurysm and interposition grafting. Vascular injury in the elderly population after trauma is especially “dangerous” owing to a large cohort of these patients being on anticoagulation. For this reason, any hematoma after blunt trauma must be fully “evaluated” and a careful vascular exam must be undertaken. When the vascular injury is acute as a result of trauma, the typical interventions include an open repair either with an interposition graft or reverse saphenous vein graft. We report a case of a delayed traumatic axillary artery dissection with resultant pseudoaneurysm treated with endovascular stent-grafting.

Our patient was a 75-year-old Caucasian gentleman with a past history of atrial fibrillation on anticoagulation, hypertension, and coronary artery disease who presented to an outside hospital in July 2018 after sustaining a traumatic fall on his left side. An upper extremity X-ray was performed demonstrating a left anterior shoulder dislocation which was reduced in the emergency department. A computed tomography angiogram (CTA) was also performed and showed non-visualization of the distal axillary artery. Vascular surgery was consulted and cleared the patient for discharge. At the time, the patient was asymptomatic with no vascular compromise.

After discharge the patient continued to have swelling and pain in his left arm. He presented to the emergency department multiple times but was treated for his pain and sent home. Approximately three and a half weeks after the initial trauma he underwent an outpatient MRI after consultation with his primary care physician, which demonstrated a large chest wall hematoma and concern for a left axillary artery dissection. At the suggestion of his primary care physician, he was sent to the emergency department and eventually transferred to our institution. On our evaluation, he was noted to have decreased motor functions of his left extremity with diminished temperature and sensation over the dorsal and ventral aspects of the arm. Further he had an absent brachioradialis reflex on the affected side. His left lateral chest wall was ecchymotic, and his axilla and upper arm were firm with exquisite tenderness. He was also found to be in atrial fibrillation with rates in the 120s-130s. His radial and ulnar pulses were difficult to palpate but were audible with a doppler.

We immediately ordered a physiologic ultrasound of his upper extremities which revealed satisfactory waveforms but a borderline pressure drop between the left upper arm and forearm. He also had a CTA that revealed a 4.1 x 3.3 cm pseudoaneurysm arising from the left axillary artery with an associated axillary hematoma measuring 8 x 8 x 10 cm. The artery was noted to be reduced in caliber at the level of the pseudoaneurysm, a finding suggestive of acute dissection. Based on these findings it was recommended he undergo repair with evacuation and drainage of his hematoma.

While discussing surgical repair, we initially considered an open repair with resection of the axillary pseudoaneurysm and placement of an interposition graft. However, given his age and severity of injury we decided to attempt an endovascular repair. We considered brachial access but given the swelling and severity of the injury we determined that it would be best to avoid accessing the left arm. We decided to gain access via the left common femoral artery and performed a diagnostic angiogram. Imaging showed a 5 cm long pseudoaneurysm at the mid axillary artery with patent flow beyond this level (Figure 1A). We were able to transverse a wire and place a 6 x 5 cm Viabahn stent (W.L. Gore and Associates, Flagstaff, Ariz.) The stent was dilated with a 5-mm balloon and completion angiogram demonstrated complete resolution of the pseudoaneurysm with good patency of the distal vessels (Figure 1B). At this point the decision was made to delay the evacuation of his hematoma until the following day. We believed that if the pseudoaneurysm was not sealed and we performed concomitant evacuation we might get into uncontrollable bleeding. 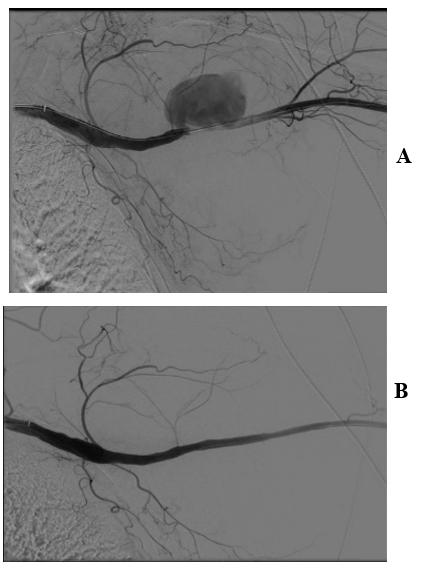 He returned to the operating room the following day after an uncomplicated post-operative course. A transverse incision was made in the left axilla and a large amount of hematoma was evacuated (Figure 2). One 19-French JP drain was placed in the left axilla to allow for further drainage. Post-operatively he did well with improvement in his pain and motor function deficits. He had minimal JP output and was discharged on post-op day four with the JP drain.

He presented to an outside hospital one day after discharge complaining of acute onset weakness and tingling of his left upper extremity with minimal drain output. Ultrasound demonstrated an 8 x 11 cm hematoma without any evidence of extravasation from the artery and a patent stent. He was transferred back to our hospital and taken to the operating room where the incision was re-opened and old organized hematoma evacuated. Two Penrose drains were left in the axilla to facilitate continuous drainage. 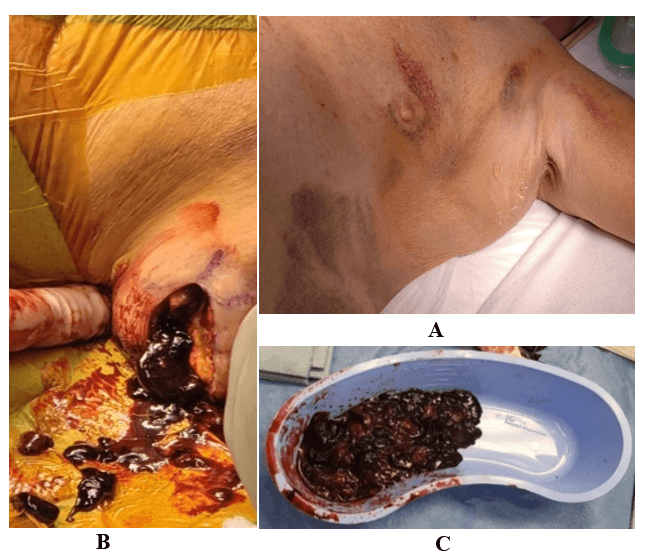 His second post-operative course was uncomplicated, and this time made a full recovery with resolution of his motor and sensory function deficits. He recovered well and has been followed for the past year showing patency of the axillary artery stent (Figures 3A & 3b). 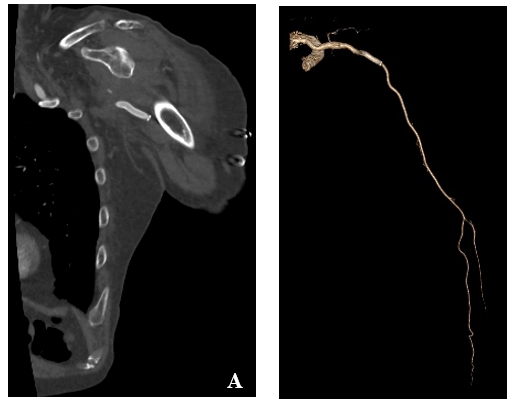 Neurovascular disruption with accompanying hematoma formation is not an uncommon occurrence as a result of trauma. In fact, axillary nerve injury is a well-documented complication of humeral fracture. Shoulder dislocation is also known to cause neurological insult, but vascular injury is less common and occurs in less than 3% of the time with posterior dislocations. However vascular injuries with anterior dislocations are even rarer. Only about 200 documented cases of vascular injury due to anterior shoulder dislocation have been reported [1]. This figure includes a mix of blunt and penetrating mechanisms and does not specify between axillary and subclavian injury. The first documented series was done by Guibe in 1911 in which 57 cases of axillary artery injury as a sequela of shoulder dislocation were described [2]. A comprehensive retrospective study on upper-extremity dislocations was undertaken between 1993 and 1993 by Sparks et al. in which 1,595 upper-extremity dislocations were identified. Out of these injuries, arterial pathology was detected in 0.97% of all dislocations [3]. Axillary artery pseudoaneurysm secondary to anterior shoulder dislocation was first reported in 1975 by Fitzgerald et al. [4].

A literature review conducted by Dubose et al. in 2012 identified 160 patients between 1996 and 2012 who had subclavian or axillary artery injury repaired with endovascular stenting, but only ten of these were axillary and a majority were a result of penetrating trauma [5]. Our case is unique in that our patient had axillary artery pseudoaneurysm secondary to dissection. Despite the challenges and conundrums in treating these complicated injuries we were able to treat our patient successfully. In our unique case we were able to safely treat his injury with a covered stent graft. As presented these injuries can safely be repaired in a hybrid endovascular and open approach.

Endovascular management with stent-grafting is a common procedure done for arterial pseudoaneurysms. Delayed traumatic pseudoaneurysms of the axillary artery can be successfully treated using this method in carefully selected patients.

© 2019 Anthony Feghali. This is an open-access article distributed under the terms of the Creative Commons Attribution License, which permits unrestricted use, distribution, and reproduction in any medium, provided the original author and source are credited. Hosting by Science Repository. All rights reserved.
DOI: 10.31487/j.JSCR.2020.02.10