Introduction: Solid pseudopapillary neoplasm is a unique enigmatic disease typically affecting young females. Being a low-grade neoplasm surgical resection is often curative. Rare cases (5-15%) present with distant metastasis. Only 2% has lymph nodal metastasis. This is a case report of metastatic SPN with both visceral and lymph nodal involvement. The work has been reported in line with the SCARE criteria.
Case Presentation: The authors present a case of metastatic SPN in an 18-year-old female who came with an abdominal lump. Contrast enhanced CT abdomen findings were in favour of huge SPN arising from pancreatic tail. The prime concern was the coexistence of bilobar liver metastasis predominantly involving right lobe. The complexity of surgical resection along with metastatectomy in a young female was herculean. This clinical dilemma was tackled with staged resection.
Conclusion: Even in metastatic SPN a reasonable survival can be achieved by surgical debulking. We emphasize the importance of aggressive approach in operable metastatic SPN.

Solid pseudopapillary neoplasm of pancreas is a rare (0.9-2.7%) low grade neoplasm of pancreas [1]. SPN typically affects females in their second or third decade of life with pancreatic tail being the commonest location [2, 3]. They often grow to huge size before producing any symptom. The presence of a large solid cystic pancreatic tumor in a young female with minimal symptoms clinches the diagnosis of SPN. Although SPN usually has an indolent behaviour, in rare cases they metastasize. Metastatic SPN constitute only 5-15% [4, 5]. Interestingly prognosis of SPN even with metastatic disease is quite favourable. This is our recent experience with a case of SPN in a young lady who presented with metastatic disease.

An 18-year-old female student noticed upper abdominal fullness and lumpiness since past 1 month. It was rapidly progressing in nature and associated with a dragging sensation. There was no associated pain, fever, bowel symptoms. She did not have any fatigue, weight loss or loss of appetite. She had no systemic illness and had a regular menstrual cycle. There was no significant family history. On abdominal examination a firm mass of size 10x12cm was palpable in the right hypochondrium, moving with respiration and continuous with liver dullness (Figure 1). Another immobile mass of size 6x7cm was palpable along the left lumbar region with firm-hard areas. Both were non-tender. Hematologic and metabolic parameters including tumor markers were within normal limits.

A contrast enhanced CT of abdomen (Figure 2) revealed a large solid cystic lesion with peripheral calcification in pancreatic tail measuring 9.9 x 9.4 cm along with multiple solid & cystic lesions in both lobes of liver, largest in segment V, VI. There were few omental and perigastric deposits with suspicious tiny lung nodules. In the PET CT (Figure 3) pancreatic tail and liver lobe lesions were noted to be FDG avid, the subpleural nodules in bilateral lower lobe lungs were noted to be FDG non-avid. 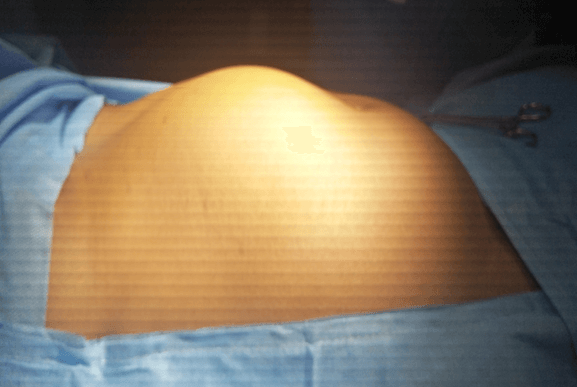 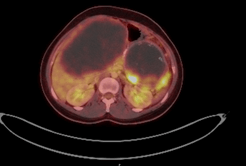 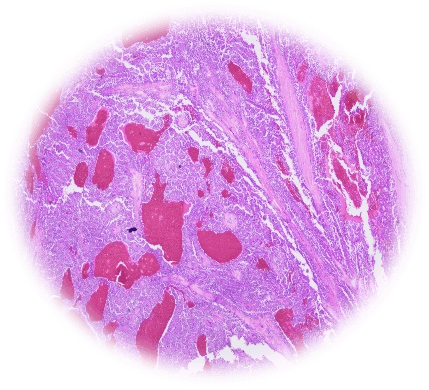 In view of indolent nature of the disease as well as the young age of this patient, an aggressive approach to treatment was decided. Since the liver metastases were extensive a staged resection was planned. Distal pancreatectomy with splenectomy along with non-anatomic liver resection to tackle the segment V, VI lesions was planned on first stage. Per operatively there was a large cyst arising from pancreatic tail with multiple omental deposits and significant lymph nodes in the vicinity.

Histopathological evaluation (Figure 4) confirmed it to be SPN of pancreatic tail measuring 14X11.5X9.5cm with negative margins. 51 out of 64 lymph nodes examined showed evidence of metastases. Liver metastases resected margins were free and was reported as pT3pN2M disease.

Intra operatively multiple cystic lesions were noted in segment VIII and VII which were adherent to diaphragm. Hence, we proceeded with right hepatectomy along with excision of a superficial segment 2 lesion. Her post op recovery was uneventful. Oncology opinion was sought to plan on targeted therapy after next generation gene sequencing. As no actionable mutations could be detected in the tumor tissue, patient is currently on regular follow up and she is asymptomatic.

Solid pseudopapillary neoplasm (SPN) of the pancreas being a rare disease is still enigmatic. The exact etiology and differentiation status is unknown. The tumor cells have been proposed to arise from primitive pancreatic cells (e.g. acinar cells, ductal epithelium or endocrine cells) or from cell lines of the female genital bud [6-8]. The molecular events associated with the development of SPN have recently been elucidated. It is characterized by activating Wnt/ β-catenin gene mutations, loss of E cadherin mutations, and alterations in Notch signalling and Androgen Receptor (AR) signalling pathways [9-11].

Preoperative histological confirmation is indicated only in patients with high operative risk or those demanding complex surgical procedures. Endoscopic ultrasound assists in preop histologic sampling. Immunohistochemistry stain positive for beta-catenin, vimentin, CD10, cyclin D1, CD56, progesterone receptor, SOX 11 [12-15]. The incidence of metastasis in SPN is even rarer (5-15%) and is synchronous in liver or peritoneum [4, 5]. Our patient presented at 18 years with metastatic disease. The prognosis of SPN even with metastatic disease is reasonably favourable [16, 17]. This was the rationale behind aggressive resection in our patient. Various predictors of malignancy in SPN include presence of nuclear pleomorphism, vascular invasion, perineural invasion, adjacent organ invasion, male gender. However, correlation between tumor size and malignant potential is controversial.

Given the paucity of reported cases, management of metastatic disease is, to date, poorly defined. General consensus is surgical debulking which is in contrast to oncology principles applied to other pancreatic malignancies. The rationale behind it is that debulking increases chances of survival since disseminated disease is not a negative predictor of survival. In our patient debulking accounted to distal pancreatectomy, splenectomy along with bilobar hepatic metastasectomy. Morbidity of planned surgery was minimised by staged approach. Classically being a low-grade neoplasm, finding positive lymph nodes is very uncommon in this entity in (<2%) [18]. Extensive lymphatic dissection is not warranted routinely. However, in our patient, standard lymphadenectomy was done in view of significant nodes in the vicinity. 51 out of the 64 nodes harvested showed evidence of metastasis which is very unique. Although postop biopsy reported to be pT3pN2M disease, literature review proved that TNM stage had no significant correlation with the tumor recurrence or survival. This information turned out to be a silver lining for the patient and her parents.

The use of adjuvant chemotherapy or radiotherapy in the treatment of SPN is limited to isolated case studies. Many different regimens of chemotherapy have been used without any success. Radiotherapy has been used infrequently [19, 20]. Other reports have also looked at estrogen receptor status, but results are inconclusive. Next generation gene sequencing (NGS) is a revolutionary DNA sequencing technology with which the entire human genome can be sequenced within a day. It requires less DNA than required for conventional techniques. NGS in SPN help plan on targeted therapies. However, it turned to be futile in our patient due to lack of actionable mutations.

This case report highlights the visceral and lymphatic metastatic potential of SPN. Even in metastatic SPN meticulous planning and aggressive approach must be attempted as reasonable long-term survival can be expected in these patients.

Patient and her family provided informed consent to the publication of this manuscript.

© 2021 Ashna S Pal. This is an open-access article distributed under the terms of the Creative Commons Attribution License, which permits unrestricted use, distribution, and reproduction in any medium, provided the original author and source are credited. Hosting by Science Repository. All rights reserved.
DOI: 10.31487/j.IJSCR.2020.04.05