The nose is unique in that it is the most prominent of all facial features. Its topography is complex, with multiple adjacent concave and convex surfaces. The free margins of the alar rims are mobile, easily elevated, and displaced, whilst the skin over the caudal one-third has limited mobility, restricting its recruitment for local flaps. A review of four hundred nasal reconstructions by Zitelli, showed that bilobed flap was the most common option selected for lower one-third nasal reconstruction [3].

As described by Burget in 1985, Zone II and III of the nose (Figure 2) are the most technically challenging areas to repair defects in, due to the thick, taut non-compliant and often sebaceous nature of the skin [5]. This makes primary closure impossible. It was borne out of this need, with the knowledge of the rich vascular anastomosis supplying the skin and soft tissue of the face and nose, that both bilobed flaps and nasolabial flaps were created. Oriental skin is reported to possess thicker fibrofatty tissue, excess sebaceous glands and weaker underlying nasal cartilage than Caucasians [6]. This explains why the bilobed flap alone is an insufficient technique to adequately repair defects in Zone II of the nose in Asian patients.

Although Asian noses are generally shorter with a more depressed radix, Asian skin tends to be thicker and more non-pliable which usually result in unfavourable tissue retraction upon healing. We have designed a modified bilobed nasolabial flap based upon the evolution of the bilobed flap over the years for coverage of nasal alar defects in our case series of two Asian patients following the aesthetic subunit reconstruction principles. Our (Table 1) below summarizes the evolution of the bilobed flap.

A 67-year-old Chinese female presented with a one-year history of an enlarging ulcer on the left side of her nose (Figure 1A). The lesion measured 5 x 8mm and was noted to have overlying telangiectasia. A punch biopsy confirmed the diagnosis of basal cell carcinoma. Wide local excision of the ulcer was carried out with 3mm margins all round. The margins of resection was confirmed to be adequate on frozen section before reconstruction was carried out. 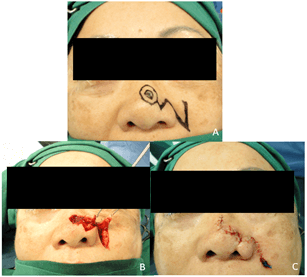 The area surrounding the nasolabial fold and the dorsal skin over the area of the flap edges was infiltrated with lignocaine 2% and 1:80 000 adrenaline, and the flap was raised at the fascial layer, superficial to the underlying musculature. The primary nasal tip lobe was thinned to the level of the subcutaneous vascular plexus and transposed to rebuild the alar rim. The secondary nasolabial lobe was employed to cover the defect created following rotation of the primary nasal tip lobe. Then due to the laxity of nasolabial skin, the secondary lobe cheek defect was closed primarily (Figure 1C). 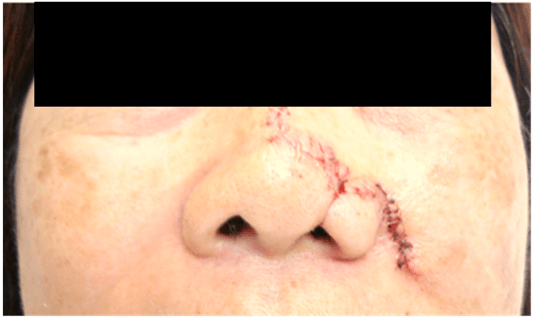 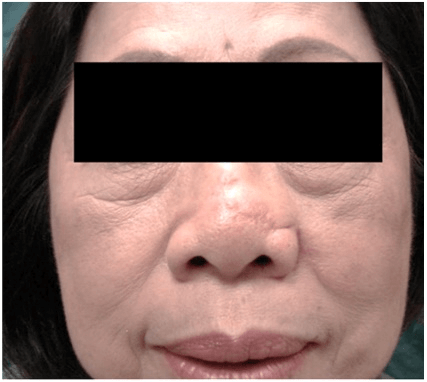 In consideration of the aesthetic subunit’s principle, the border of each lobe was matched with the alar groove and the nasofacial sulcus. The flap was dressed with chlortetracycline 1% ointment (Aureomycin, Lederle, Massachusetts) and Steri-strip (3M, United States). The patient was followed up at 1 week (Figure 2), 1 month, 6 months and 18 months (Figure 3) with no evidence of recurrence of the basal cell carcinoma or alteration in the flap contours.

A second case of a 75-year-old Malay gentleman who presented with a 3-month history of enlarging lesion over the right aspect of his nose was biopsied and found to also have basal cell carcinoma (Figure 4A). He was keen for a single stage procedure to resect and reconstruct his nasal dorsum hence the same modified bilobed nasolabial flap was performed for him with satisfactory results as seen from (Figures 4B, 4C & 4D). Figure 4E shows him during his 10-month postoperative follow up visit demonstrating minimal alar rim retraction. This case shows that the modification of the nasolabial bilobed flap can be adapted from its use in Oriental patients to be applied to Asian Malay patients as well. 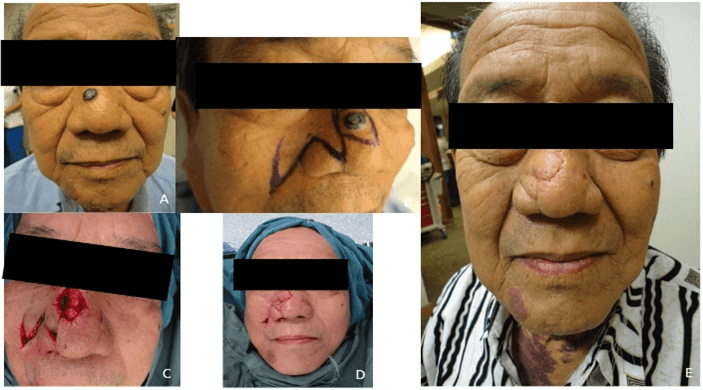 The bilobed flap is a transposition flap which was first described by Dutch surgeon Esser in 1918 as a good 'workhorse flap' for reconstruction of defects of the lower third of the nose [7]. Esser's initial flap design described two equally sized transposition flaps transferred to cover defects of the distal nasal tip. In 1953, Zimany showed that the second lobe could be made smaller than the first while facilitating closure. Zimany also expanded its use to reconstruct defects of the trunks and the soles [8]. However, it was subsequently found that under sizing the primary or secondary lobe resulted in increased tension which led to alar distortion. In 1989, Zitelli modified the bilobed flap to include a total transposition arc of 90-110 degrees and an approximately 45 degrees pivotal arc between each lobe [2]. Zitelli's bilobed flap used skin from the mid-dorsum and the sidewall and is for defects that are 1.5cm in diameter or smaller however this too has been shown to lead to alar retraction. In 1994, Moy et al. suggested that the diameter of the primary flap should approximate the size of the defect and the diameter of the second lobe should be 80-85% that of the primary lobe [9]. He also suggested that the second lobe can be narrower and longer as the skin of the nose is more mobile.

The modified nasolabial – bilobed flap that we propose is a simple design and a single stage procedure. It has the following advantages of firstly preserving the aesthetic subunits of the nose as the secondary nasolabial lobe of the flap matches the border of the nasolabial sulcus exactly. Secondly, it results in less donor site morbidity than a forehead flap or a frontonasal flap as the eventual site of the donor scar is less obvious and may be hidden in the nasal alar sidewall. Third, for nasal lesions overlying Burgets Zone II, due to the unique texture and colour of the distal nasal skin, it is always preferable that the tissue be replaced by similar tissue. Fourth, these modification is superior to the Zitelli, Zimany and Moy modifications as it leads to less dog-ear formation and nasal alar retraction for lesions of the nasal alar, dorsum and tip. The modified bilobed nasolabial flap excels in this area due to its excellent colour and texture matches with adjacent tissues and ability to transfer skin and soft tissue from an area of abundance to an area of deficiency. A nasolabial flap alone would not be able to provide as good a skin match for defects of zone II as this modified bilobed nasolabial flap.

The disadvantages of the flap are its deficiencies for reconstructing defects larger then 20mm due to inability to mobilize sufficient tissue for coverage without a dog ear developing if excessive nasolabial skin is mobilized [10]. For larger defect sizes, other options of reconstruction should be employed such as full thickness skin grafts. It cannot solely be used for reconstruction of full thickness defects involving nasal cartilage as well. This challenging defect can be reconstructed using chondral cartilage to shape as a strut on which to re-drape the patient’s nasal skin.

We recommend that for all defects of the Burget’s Zone II, our modified bilobed nasolabial flap be considered as a viable option for aesthetic defect closure in Asian and Oriental patients.

© 2021 Priya Tiwari. This is an open-access article distributed under the terms of the Creative Commons Attribution License, which permits unrestricted use, distribution, and reproduction in any medium, provided the original author and source are credited. Hosting by Science Repository. All rights reserved.
DOI: 10.31487/j.SCR.2021.01.01