Background: Continuous positive airway pressure is a cost-effective treatment of obstructive sleep apnea (OSA), but in case of craniofacial anomalies, which have a recognized role in OSA development, maxillary-mandibular advancement surgery is a recommended therapeutic option.
Clinical Presentation: We describe a patient with severe OSA (apnea-hypopnea index = 42) treated by maxillary-mandibular advancement (MMA) surgery. Effective results were confirmed by polysomnography at 6 months post-surgery with normalization of the polysomnographic parameters (apnea-hypopnea index = 17) but due to persistent sleepiness, the patient was unable to resume his work.
Conclusion: Maxillary-mandibular surgery can be a valid option for treating severe OSA associated with craniofacial anomalies. However, our results emphasize the need of critically assessing surgical approaches and the need to redefine success for OSA management.

Obstructive sleep apnea (OSA) is a frequent sleep disorder (2-4% of the adult population), with an over increasing prevalence characterized by recurrent complete (apnea) or partial (hypopnea) obstruction of the upper respiratory airways during sleep [1, 2]. The most common symptoms are snoring and daytime somnolence that is the consequence of sleep fragmentation and that strongly increases the risk of motor vehicle accidents [3]. OSA pathophysiology is associated with predisposing factors, particularly maxillary and mandibular skeletal malpositions, associated with loss of activity of the oropharynx muscles. The prevalence of daytime sleepiness and undiagnosed OSA has been estimated as high as 23% in a subgroup of patients with dentofacial deformities, a much higher rate compared to the general population [4].

OSA severity is classified using the apnea-hypopnea index (AHI) that represents the number of apnea/hypopnea events per hour: mild (5-15 events/hour), moderate (15-30 events/hour), and severe (>30 events/hour). For patients with severe OSA, continuous positive airway pressure (CPAP) is the reference treatment [5]. However, this strategy presents some limitations, particularly its low acceptance and compliance in the long term. When adherence is defined as greater than 4 hours per night, 46 to 83% of patients with OSA have been reported non-adherent to treatment [6]. Mandibular advancement devices (MAD) are considered as an alternative to CPAP, but they may not be well tolerated in the long term or not effective enough in the case of severe OSA [7].

Advancement surgery of the maxillary and mandibular bones is an alternative strategy reserved more often for patients with severe OSA [8, 9]. The aim of MMA surgery is to propose a definitive treatment of OSA, thanks to the increase of the posterior airway space (palate and base of the tongue) that leads to the anteriorization of the hyoid bone and of the tongue structures. The literature reports a 90% symptoms improvement rate among patients with AHI data over an average period of 6 months follow-up [10, 11]. Patients eligible for MMA surgery are young (less than 65 years of age), not obese, with severe OSA (AHI >30), without associated pathology, and displaying a retrusive facial profile. A complete ear-nose-throat (ENT) examination must be performed before surgery, including nasal endoscopy and drug-induced sleep endoscopy, to confirm the upper airway collapsibility and to assess the risk-benefit ratio [12].

A 40-year-old truck driver with severe OSA was referred to our service after the failure of treatment by CPAP (low compliance) and by MAD (jaw pain, tooth sensitivity/discomfort, feeling of suffocation). The Epworth sleepiness scale score was 17. The patient had a body mass index (BMI) of 26 kg/m2, restless leg syndrome, and depressive syndrome. The patient reported a cigarette smoking habit (up to 3 packs/day) and his oral hygiene was poor. The polysomnographic parameters were as follows: AHI = 42/h, mean saturation of peripheral oxygen (SaO2) = 94%, sleep time with oxygen saturation (SaO2) <90% = 1%. The clinical analysis (ENT, exo and endobuccal, orthodontic and cephalometric) excluded macroglossia and hypertrophy of the tongue base and found a deviation of the nasal septum, skeletal class II malocclusion with retrognathic mandible and an hyperdivergent pattern (Figure 1). Lips were thin, with lip incompetence at rest. The patient presented a dental-maxillary disharmony, with an important higher and lower incisive crowding estimated at 7 mm, had class II molar and canine occlusion, as well as mild gum inflammation (Figure 2). Analysis of the profile cephalometry images highlighted the very posterior and low base of the tongue, but without obstacles due to uvula and/or tonsil enlargement (Figure 3A). 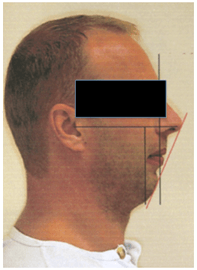 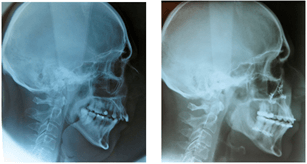 Figure 3: Cephalometric landmark. A) Initial cephalometric analysis and B) 8 months after maxillofacial surgery and orthognathic treatment.

Due to the poor acceptance of the previous treatments (MAD, CPAP), maxillary-mandibular advancement surgery was proposed, proceeded by a pre-surgery preparation phase. This included oral hygiene education sessions, orthodontic alignment, leveling and decompensation of the dental arches to correct the malocclusion. Concomitantly, a support programme to quit smoking was put in place with the complete stop of cigarette consumption 3 months before surgery. The surgical intervention (2 February 2011) consisted of maxillary-mandibular advancement that associated Le Fort 1 maxillary osteotomy and sagittal split mandibular osteotomy (Figures 4 & 5). The immediate postoperative period was complicated by crippling pain, hypopharyngeal ecchymosis, and cacosmia that disappeared in 3 weeks. 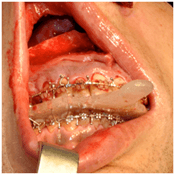 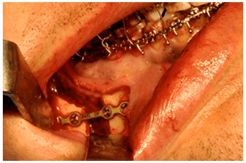 Figure 5: View of osteosynthesis plates at the mandible during surgical intervention.

The patient was followed every 15 days for the first 2 months post-surgery, then once per month for 8 months, and then each 3 months for 2 years. At 8 months post-surgery, the face profile was considerably improved (reduction of the convexity and malposition, increase of the neck-chin distance, close nasolabial angle) (Figure 6). Following orthodontic treatment, dental malocclusion was corrected (Figure 7). The comparison of the pre-and post-surgery cephalometric images showed a broadening of the posterior space at the level of the tongue base and highlighted the maxillary impaction, the mandibular advancement, and the anterior maxillary and mandibular rotation (Figures 3B & 8). The post-surgery clinical outcome was marked by the complete regression of snoring and a partial improvement of the daytime somnolence (ESS score = 11); the feeling of tiredness progressively decreased. The 8 months polysomnographic results confirmed the efficacy of the surgical intervention with a significant reduction of the AHI from 42 to 17 without position predominance. The oxygen desaturation was never lower than 90%. The follow-up visits for 2 years confirmed the stability of the face and dental morphologic reconstruction, but the patient persistently complained of daytime somnolence and residual excessive sleepiness that prevent him from returning to work. 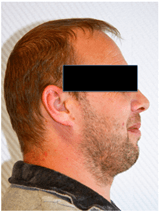 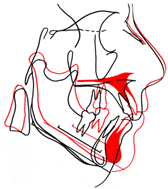 The understanding of the role of craniofacial anomalies in OSA development allowed developing surgical strategies to correct or improve these dysmorphisms. These patients often present a specific craniofacial profile (i.e., short cranial base, retrusion/shortening of the mandible, wider lower face, retrognathia, class II malocclusion) that causes a reduction of the diameter of the upper airways [7]. MMA surgery is among the most effective treatments of severe OSA in adults due to the definitive changes in the upper respiratory pathway. It allows increasing the posterior airway space (palate and base of the tongue), moving forward the base of the tongue, and correcting the skeletal dental anomalies [9, 13]. Adjunctive strategies, such as orthognathic surgery, are proposed in cases of dentofacial deformities [14]. The management of such patients is delicate and requires a selection based on strict criteria: younger than 65 years of age, BMI lower than 33 kg/m2, absence of comorbidities and presence of midfacial retrusion [15]. In 3% of patients, post-surgery complications have been reported: hematoma, facial paralysis (reversible) or residual lips-chin anaesthesia. Severe complications (pseudarthrosis, tracheotomy) are rare and recorded in less than 1% of cases.

The results obtained with MMA surgery in our patient are in agreement with the literature data on AHI reduction as the primary outcome; surgical success being defined by consensus as the percentage of patients with greater than 50% reduction AHI or fewer than 20 AHI events/hour and OSA cure less than 5 events/hour following surgery [10]. Several meta-analyses confirm the benefit of MMA surgery in enlargement of the upper airway, improvement of oximetric indicators and better quality of life measured on the Epworth sleepiness scale [10, 16]. Reported rates of surgical success and cure are 85.5% and 38.5% respectively. Preoperative AHI of fewer than 60 events/h was the factor most strongly associated with the highest incidence of surgical cure. Patients with a preoperative AHI greater than 60 events/h experienced substantial net improvements despite modest surgical cure rates [10]. Nevertheless, controversies on appreciation of surgical results have been long-running and very little is known about the causes of surgical failure [17]. Some authors who pledged for redefining success as an objective cure based on AHI outcomes of ≤ 5 and or ≤10 events/h were immediately dismissed as unrealistic objectives disconnected from clinical practice [18, 19].

Similar unfavourable results have been reported for CPAP and MAD treatments with persistent or residual daytime sleepiness despite acknowledged significant AHI events reduction [20, 21]. Periodic limb movement, behaviourally induced insufficient sleep syndrome and depression are the most common causes of persistent sleepiness on CPAP-treated patients. Residual sleepiness after exclusion of all recognized causes is 6% in this subgroup of patients [20]. Our case illustrates the dissociation between positive anatomic landmarks correction and lack of clinical benefit. Despite satisfactory AHI and ESS reduction, persistent daytime somnolence prevented the patient from resuming his work as a professional driver.

MMA surgery is a second-line therapeutic option for the management of patients with severe OSA (AHI >30/hour) and moderate bimaxillary retrusion, without major overweight (BMI <30kg/m2). It allows a global and stable treatment of the pharyngeal airway collapse, but anatomical restoration does not preclude clinical success despite objective oximetric indicators improvement. The management of patients who are potentially eligible for this intervention requires a multidisciplinary collaboration of sleep specialists, orthodontists and maxillofacial surgeons [8].

© 2021 I. Dupuy-Bonafé. This is an open-access article distributed under the terms of the Creative Commons Attribution License, which permits unrestricted use, distribution, and reproduction in any medium, provided the original author and source are credited. Hosting by Science Repository. All rights reserved.
DOI: 10.31487/j.DOBCR.2021.02.02

Figure 3: Cephalometric landmark. A) Initial cephalometric analysis and B) 8 months after maxillofacial surgery and orthognathic treatment.

Figure 5: View of osteosynthesis plates at the mandible during surgical intervention.