Observe the Unexpected: A Strange History of Bioprosthesis in a Patient in Dialytic Treatment

A 73-year-old male with a history of right nephrectomy due to cancer in 1996 was referred to our hospital for dyspnea and acute chest pain. In May 2007, the Shelhigh® No-React® valved bioconduit was implanted using the Bentall-De Bono procedure due to the finding of severe aortic valve insufficiency and acute type A aortic dissection. Nine months after discharge, he was placed on chronic renal dialysis. The patient’s condition was followed carefully after being placed on dialysis, and now, thirteen years later the implanted aortic valve is still moving freely without signs of calcification.

Multiple publications found correlations among cardiopulmonary bypass (CPB), hemodialysis treatment, and accelerated rate of calcification; aortic valve stenosis is, in fact, a common problem for patients who are suffering from end-stage renal diseases [1, 2]. Hemodialysis treatment and CPB are considered as forms of immune insults that lead to an acceleration of the calcification process of the bioprosthesis as fast as children do with their bioprosthesis. In an original paper, the reaction was compared to different pericardial substitutes in 40 animal subjects [3]. Half of the procedures were performed with CPB, and the other half without CPB. In three months, the findings have clearly shown that most of the pericardial substitutes implanted without CPB were well received, while the patient with CPB showed disastrous adhesion and strong foreign body reaction. Bioprosthetic heart valves are not recommended for patients undergoing renal dialysis [4].

However, there are some publications showing that the long-term survival of renal dialysis patients is relatively short, and there is no statistical difference between bioprosthesis and mechanical valve [4, 5]. Renal dialysis is also a form of immune insult known to increase the risk of cardiac diseases due to calcification, leading to aortic valve stenosis and infections [6-8]. According to literature data, approximately half of the patients treated for valvular replacement in the hemodialysis group displayed signs of aortic valve calcification at echocardiography. Patients of the non-dialysis control group displayed a significantly lower rate of calcification [2]. Normally, calcification occurs within 1-2 years of implantation or shorter if renal dialysis is taken into consideration [1]. This paper presents an extraordinary case where the patient has undergone hemodialysis for close to 13 years, but his bioprosthetic aortic heart valve has not calcified.

A 73-year-old male patient was admitted to our hospital for dyspnea and chest pain. He had no fever, his blood pressure was 120/40 mmHg, and his heart rate was registered at 96 bpm with a regular rhythm. During hospitalization, transthoracic echocardiography (TTE) revealed severe tricuspid aortic valve regurgitation with an ejection fraction of 50% and an ascending aortic aneurism of 5.6 cm with an acute type A aortic dissection. A computed tomography (CT) chest scan was used to confirm the aneurism and dissection. Based on his clinical symptoms and cardiovascular images, the physicians advised immediate surgical procedures. In May 2007, we implanted a 25 mm Shelhigh® No-React® valved bioconduit as an aortic root replacement using the Bentall-De Bono technique (Figure 1).

At the 4-month follow-up, a Magnetic Resonance Imaging (MRI) indicated the presence of a voluminous mediastinal collection with regular borders and a moderate high-signal intensity displacement along the posterior-lateral wall of the ascending thoracic aorta and cranially of the left atrium. Laboratory evaluation revealed a slight elevation in C-reactive protein and erythrocyte sedimentation rate, but the white blood cell count was normal. Re-operation was carried out approximately 4 months after the initial surgery through a full median resternotomy. After removing the adhesion between the superior vena cava and the right side of the ascending aorta, approximately 30 mL of fluid purulent collection was drained. The bioprosthesis was not removed in this second exploration, but an accurate disinfection of the surgical site was performed by choice of the surgeon, who, on the basis of the clinical and instrumental panel, considered his collection as an inflammatory and non-infectious process. The liquid culture was negative for common aerobic and anaerobic germs, and broad-spectrum antibiotic therapy was suspended after 10 days. Five months after discharge from the second surgery, he was admitted to the hospital for dyspnea, edema in the lower limbs, and poor blood pressure control. A renal failure due to nephrotic syndrome was diagnosed, and he was put on hemodialysis.

Figure 2: MR scan performed eight-months after surgery shows A) the homogeneous fat tissue (arrows) along the ascending thoracic aorta both in the axial black-blood T1w and the cine-frame steady state free-precession (SSFP) acquired along the 3-chamber view. B) The residual type-B aortic dissection is also displayed (*). C) A diastolic axial SSFP cine-MR image acquired across the aortic root well shows the regular tricuspidalic morphology of the prosthetic valve (arrow).

Thirteen years following the initial surgical procedure and the initiation of renal dialysis, the patient remained free of implant-related health complications and continues to demonstrate biocompatibility with the No-React BioConduit. Throughout the 13-year term, the patient displayed no signs of infection, showed resistance to calcification, and displayed normal functions of the bioprosthetic aortic valve (Figure 2).

The body reacts negatively towards the presence of foreign bodies, procedures such as CPB, and hemodialysis exposes blood to artificial components, which can alert the body’s inflammatory response and heighten the sensitivity of the immune system. These immune insults can potentially induce the cellular and humoral constituent of the adaptive immune system to undergo quantitative and qualitative changes, leading to a temporary immunodeficiency [7]. Indeed, the major causes of death in End-stage Renal Disease patients are infections and cardiovascular disease (CVD), together accounting for up to 70% of all deaths in this patient population [7]. In relation to bioprosthetics, the inflammatory response from the activation of the immune system, according to Gabbay and co-authors, is what causes infection and calcification in the body once the valve has been implanted [3]. 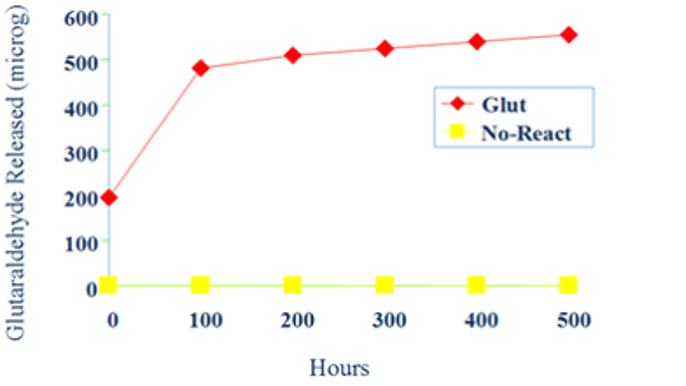 Figure 3: Graphic shows that the No-React tissue releases no glutaraldehyde once incubated for up to 500 hours, while conventional treatments display an increase trend for toxic molecules release of glutaraldehyde.

In order to reduce the reaction from the immune system, the implanted tissue needs to be completely detoxified. The No-React tissue releases no glutaraldehyde once incubated for up to 500 hours, while conventional treatments have an increasing trend of release of toxic glutaraldehyde molecules (Figure 3). Therefore, any tissue that can release glutaraldehyde is toxic enough to be attacked by the hypersensitive immune system due to hemodialysis. In light of this case, even though there is only a single patient, it is shown that No-React BioConduit and valves can resist infections and calcification due to the endothelium layer forming over the surfaces of the valves in contact with blood [9]. We may be dealing with a completely new technology that has not been studied yet, and that could improve survival rate and quality of life. Larger studies are needed to confirm these data.

© 2021 Andrea Mazza. This is an open-access article distributed under the terms of the Creative Commons Attribution License, which permits unrestricted use, distribution, and reproduction in any medium, provided the original author and source are credited. Hosting by Science Repository. All rights reserved.
DOI: 10.31487/j.SCR.2021.02.14

Figure 2: MR scan performed eight-months after surgery shows A) the homogeneous fat tissue (arrows) along the ascending thoracic aorta both in the axial black-blood T1w and the cine-frame steady state free-precession (SSFP) acquired along the 3-chamber view. B) The residual type-B aortic dissection is also displayed (*). C) A diastolic axial SSFP cine-MR image acquired across the aortic root well shows the regular tricuspidalic morphology of the prosthetic valve (arrow).

Figure 3: Graphic shows that the No-React tissue releases no glutaraldehyde once incubated for up to 500 hours, while conventional treatments display an increase trend for toxic molecules release of glutaraldehyde.