Background: Small bowel obstruction (SBO) after transabdominal preperitoneal (TAPP) laparoscopic inguinal hernia repair is a rare complication. It is generally associated to a failure of the peritoneal gap closure with intestinal loops passing through the gap.
Case Presentation: We report a case of SBO secondary to titanium tack after 2 weeks of laparoscopic TAPP repair managed by laparoscopic approach, and we update some considerations about this unfortunate complication.
Conclusion: SBO due to mechanical fixation devices utilized in laparoscopic TAPP repairs is infrequent. In case of closing of peritoneal gap with tacks, those with low exposition profile and absorbable should be preferred.

Laparoscopic inguinal hernia repair has become a widely accepted technique since its inception in 1990 due to the benefits of the minimally invasive approach [1]. Both transabdominal preperitoneal (TAPP) and totally extraperitoneal (TEP) techniques use any medium for mesh fixation such as non-resorbable or resorbable tacks, sutures, staples or more recently implemented fibrin sealant. The TAPP technique also requires the closure of the peritoneal gap to avoid contact of the mesh with the intra-abdominal content and the closure could be performed mainly with sutures or tacks. Small bowel obstruction (SBO) after TAPP repair is a rare entity and several causes has been related to this unfortunate complication as inadequate closure of the peritoneal gap, hernia at the trocar site, adhesions or tacker lost in the abdominal cavity [2, 3].

A 61-year-old male patient was referred to our institution. He presented with abdominal pain of 72 hours evolution associated to vomiting and constipation. Physical examination revealed a swollen abdomen with tenderness at hypogastric area. History records showed bilateral inguinal hernioplasty TAPP performed in another center 15 days before. Blood tests were normal. Abdominal radiograph showed a significant dilatation of small bowel loops. In addition, several images of spiral tacks were evidenced in both groins (Figure 1A). It was suspected a mechanical SBO, and a computed tomography was requested. Dilated small bowel loops with an abrupt change of ileal loop caliber at the level of the right iliac fossa, and moderate amount of free fluid were observed (Figure 1B). Based on these findings a nasogastric tube was placed and laparoscopic exploration was decided. A Hasson’s technique was used for the umbilical trocar placement. The abdominal cavity was examined, showing a small bowel loop attached to the protruding part of the titanium tack (Figure 2). Dilated bowel loops proximal to this transition point was observed. Soft adhesions were freeing with blunt maneuvers, and at the transitional point, a firm adhesion which attached the bowel loop to the tack was taken down with scissors. Correct intestinal vitality was confirmed, and it was observed that several tacks were used for closing the peritoneal flaps of the TAPP repair. Only, the titanium tack at the transitional point was removed. The patient had an uneventful postoperative, and he was discharged on the 4th postoperative day. 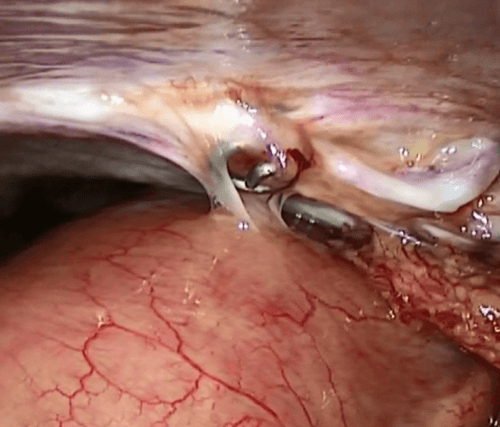 The intestinal occlusion after TAPP repair is rare (0.2-0.5%) and is associated with an inadequate closure of the peritoneal gap, hernia at the trocar site, adhesions or tack lost in the abdominal cavity [2, 3]. The importance of closing the peritoneal gap in the TAPP technique has been well documented. The closure is necessary for avoiding the mesh contact to the abdominal viscera, and it has been described several ways of closure such as staples, tacks or sutures. Kapiris et al. have shown a reduction in the incidence of intestinal obstruction from 0.8% to 0.1% by changing the closure of the peritoneal flap from staples to continuous sutures [2].

Mechanical fixation with tacks is the most common manner of mesh fixation in TAPP repairs. In addition, tacks could be utilized to close de peritoneal gap as they could reduce operative time. On the other hand, tacks have been related to complications such as postoperative chronic pain secondary to nerve entrapment, or adherences with volvulus and intestinal perforation [3-6]. To reduce adverse events related to tacking, it has been proposed the utilization of absorbable tacks that could perform similar and will reduce chronic complications [7]. In this case, the titanium tack utilized has high exposition profile after deployment compared to other available tacks. Based on its adequate performance and availability, it is probably that titanium tacks are the most common mechanical fixation utilized. Despite of the low incidence of this entity, the tack exposition should be avoided by covering it with peritoneum. It has assumed that the reaction of a foreign body is directly proportional to the amount of foreign material, thus, the contact surface of the tack could play an important role in adherences development [8].

A case of SBO due to a tack lost into the abdominal cavity has been described [3]. However, to our knowledge, a deployed tack after TAPP repair has not been previously reported as a cause of SBO. The notion that those tacks represent an innocuous situation should be abandoned. In addition, at the time of closing the peritoneum gap with tacks, absorbable tacks with low exposition profile should be considered.

The institutional review board (IRB) approved this study. The patient provided written informed consent; patient anonymity has been preserved, and personal information has been protected.

Informed consent was obtained from the patient to describe the clinical course in a case report.

The datasets analysed in the current study are not publicly available, because they contain information that may compromise the privacy of the patient but are available from the corresponding author on reasonable request.

© 2021 Emmanuel E. Sadava. This is an open-access article distributed under the terms of the Creative Commons Attribution License, which permits unrestricted use, distribution, and reproduction in any medium, provided the original author and source are credited. Hosting by Science Repository. All rights reserved.
DOI: 10.31487/j.SCR.2021.08.07