Objective: To report a case of gastric epithelioid haemangioendothelioma, given its low incidence.
Introduction: Epithelioid haemangioendothelioma is a vascular neoplasm composed of epithelioid or histiocytoid cells with endothelial characteristics. They have a very low incidence of approximately one per one million and are usually asymptomatic with a difficult preoperative diagnosis.
Case Report: This study reports the case of a 58-year-old woman with a history of chronic anaemia. She underwent an elective upper endoscopy with evidence of an ulcerated submucosal lesion in the gastric antrum. The histological examination performed over the endoscopic biopsies showed the vascular characteristic of the tumor and endosonography confirmed the submucosal origin of the lesion. After resective surgery, the tumor showed the histological and immunohistochemical features of the epithelioid haemangioendothelioma.
Conclusion: Surgery in the form of wide excision seems to be the treatment of choice for this rare neoplasm in the absence of histological markers of malignant potential.

Epithelioid haemangioendothelioma (EHE) is a vascular neoplasm characterized by an epithelioid or histiocytoid cell proliferation with endothelial characteristics [1]. EHE is very rare, with an incidence of approximately one per one million. Although EHE can occur in both children and adults, it is usually diagnosed between 20 and 60 years of age. Risk factors for the development of EHE are unknown; although women are more commonly affected than men, there is no established association between hormonal factors and tumor development. EHE can involve cutaneous and soft tissue and many organs. Presenting symptoms depend on the disease site. In fact, it has been described in many sites of the body such as liver, lung, pleura, bone, omentum, thyroid and skin [2-8]. The clinical course can range from indolent disease (similar to benign haemangiomas) to aggressive disease (similar to angiosarcoma). In the majority of patients (50-76%), the disease is incidentally detected. The overall median survival of asymptomatic patients is more than 10 years. Patients with symptomatic disease have a more aggressive behaviour and a worse prognosis [9]. Gastric localization is equally rare, amounting to 0.9-3.3% of all gastric neoplasms [10-12]. Gastric EHE can present as chronic or acute upper gastrointestinal bleeding and it is not simple to be diagnosed. We report a case of a 58-year-old female patient who presented with chronic anaemia. We highlight the rarity of this tumor and the difficulties in diagnosing it preoperatively in many cases.

A 58-year-old white woman presented with chronic iron-deficiency anaemia and positive faecal occult blood test, in a medical history of well-compensated celiac disease. Abdominal examination was normal, and the patient was haemodynamically stable. An upper endoscopy showed the presence of a polypoid sessile lesion of about 2 cm, with a smooth appearance and central depression and ulceration, in the anterior wall of the gastric antrum (Figure 1). Biopsies by forceps were performed on the lesion, in particular over the depressed and ulcerated area, showing a soft consistency to bite. Histological examination showed, in the context of the gastric mucosa specimen, the proliferation of small newly formed vessels with swollen endothelium, blood extravasations and hyaline fibrosis. These characteristics were suggestive for a vascular lesion, such as capillary haemangioma, with the aspect of haemangioendothelioma.

Figure 1: At upper endoscopy: 2 cm polypoid sessile lesion with smooth appearance and central depression and ulceration in the anterior wall of the gastric antrum. 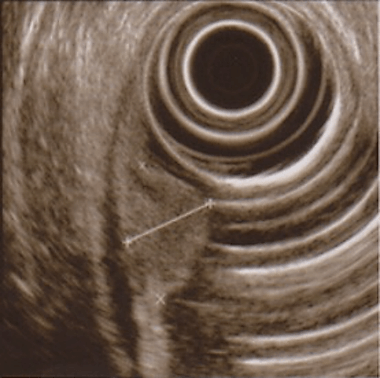 An endoscopic ultrasound (EUS) was performed using a radial probe and water injection. At the level of the endoscopically observable small mass, endosonography (Figure 2) showed as a polypoid hypoechoic lesion, 15 x 10 mm in dimension, originating from the third layer and involving the second and first layer, with preserved fourth layer (muscularis propria); no peri-gastric or celiac lymph nodes were present. EUS features were compatible with the suspected vascular lesion. Owing to the high risk of bleeding and the possibility of evolution of the lesion, in agreement with the patient, we decided to refer her to surgical resection. In laparoscopic operation, a hard mass was found in the gastric antrum with no other significant anomalies. Partial resection of the anterior antral gastric wall was performed. The postoperative period was without complication and the patient was discharged one week later.

At the macroscopic evaluation, the about 2 cm of the resected gastric wall showed a submucosal brownish ulcerated nodular formation. Microscopic examination with hematoxylin-eosin (H&E) staining (Figure 3) revealed a neoplasm originating by neoformative vascular strictures of the submucosa, edged by endothelial elements with epithelioid appearance; the nuclei were oval-oblong-shaped and sometimes showed clear nucleoli, without mitotic activity (mitotic index 0 per 50 high power fields). Ki 67 staining confirmed a very low proliferation fraction (15%). There was no evidence of epithelial dysplasia or infiltration in the adjacent muscularis propria included in the specimen. Further immunohistochemical (IHC) analyses showed a positive expression of several vascular markers such as CD31 and CD34 and a negative one for HHV8 and CKpool (Figure 4). The final pathological diagnosis was of ulcerated epithelioid haemangioendothelioma with a low grade of malignancy and tumor-free resection margins. During the follow-up, upper endoscopy and an abdominal CT scan performed six months later did not show any recurrence.

EHE is a rare but characteristic tumor of vascular origin that can involve the stomach [10, 11]. Gastric EHE has a predominance in females and in the sixth decade of life. This tumor usually presents a low malignant potential but sometimes may has an aggressive clinical course with metastatic evolution; the latest WHO classification calls EHE such “intermediate” or “borderline” neoplasms [12-14]. Clinical presentation can frequently include abdominal pain, sometimes with symptoms of gastric outlet obstruction if the mass increases in size and upper gastrointestinal bleeding due to ulceration and necrosis of the mucosa [10, 15]. Diagnosis by endoscopy and biopsy is often unsatisfying and arduous because of sampling problems related to the submucosal location of the tumor [10]. Radiological techniques such as ultrasound or computed tomography may be useful to do an accurate preoperative staging and EUS can give information regarding the local invasion.

Histopathological examination supported by immunohistochemical findings is of fundamental importance for the accurate diagnosis of this rare nosological entity. The presence of an “epithelioid” morphology of the tumor cells, the intracellular vacuoles, and the positive immunoreactivity of markers of vascular differentiation such as factor VIII, CD34, and CD31 help to obtain the diagnosis. It is important to make a differential diagnosis for angiosarcoma (that shows a high proliferation fraction on Ki 67 staining) and for Kaposi’s sarcoma (IHC positive reaction for HHSV-8). In cases with a focal spindling of cells and areas of coagulative necrosis, the risk of metastasis and recurrence is higher [10]. Similarly, a high mitotic rate (>6 mitosis per 10 high power fields) associates with a bad prognosis. Considering that primary EHE is commoner in the liver, it is recommended to exclude a hepatic neoplasm before concluding for a final diagnosis of primary gastric EHE [3, 16].

Surgery is the treatment of choice for this rare neoplasm. For lesions with low mitotic index, without focal spindling of cells and areas of coagulative necrosis or without evidence of metastases, wedge resection is the technique to prefer; wide excision of the tumor along with a 2 cm margin even without radical lymphadenectomy seems to be adequate [17]. However, a mass lesion presenting as bleeding or obstruction is more predictive of worse behaviour and radical surgery as gastric resection or total gastrectomy may be necessary.

Although pleural EHE seems to respond to combination chemotherapy, including carboplatin and etoposide, its value in gastric EHE is not completely known. There is evidence to support the use of chemotherapy and targeted therapies specifically focusing on anti-angiogenesis; the current landscape of oncology with the emergence and excitement of immunotherapy could also translate into a role for immunotherapy in this disease [9-18].

This case report allows underlining the existence, although rare, of gastric EHE. It must be borne in mind that EHE can be an uncommon cause of upper occult gastrointestinal bleeding. The correct diagnosis depends on the histological findings, but it may be difficult preoperatively as biopsies could not provide adequate material due to the submucosal location of the tumor. Detailed immunohistochemical evaluation of the full resected specimen is essential to reach a diagnosis. Surgery represents the treatment of choice. Considering the data regarding the surgical management obtained from review of the literature, wide excision seems to be adequate in cases without histological markers of malignant potential evolution. However, in the absence of histological markers of aggressiveness, a conservative approach is preferred whenever possible. Due to the borderline biological behaviour of this neoplasm, detailed clinical evaluations and a complete follow-up in this setting of patients are recommended.

© 2021 Mitri Roberto. This is an open-access article distributed under the terms of the Creative Commons Attribution License, which permits unrestricted use, distribution, and reproduction in any medium, provided the original author and source are credited. Hosting by Science Repository. All rights reserved.
DOI: 10.31487/j.SCR.2021.05.02

Figure 1: At upper endoscopy: 2 cm polypoid sessile lesion with smooth appearance and central depression and ulceration in the anterior wall of the gastric antrum.