Objective: The study objective was to examine the relationship between dental caries diagnosed before the age of four and ICD diseases over a 16-year period.
Methods: The sample of approximately 33,531 (48% female) individuals having a total of 2,864,790 physician diagnoses over 16 years comprised a the cohort two groups, one with (2.7% of the sample) and one without dental caries (dependent variable) that were under the age of four years in the first two years of the sample data. Categories of dental caries and associated gingivitis and periodontal disease were based on the International Classification of Disease (ICD Version 9) diagnostic codes 521-523. The sample was described. Odds ratios comparing those with and without dental caries and the main ICD classes were calculated. Additionally, the ratio of each ICD diagnosis frequency comparing the cohort groups were calculated and represented the diagnoses assigned over the first 15 physician visits.
Results: Males had proportionally more dental caries diagnosed. Diagnoses were made predominantly by general practitioners. Within the dental caries cohort group, associated ICD diagnoses were over-represented in both odds ratios and within individual ICD diagnoses on the first diagnosis and over the first 15 diagnoses in time.
Conclusion: Dental caries diagnosed in very young children before the age of four are associated with multi-morbidity over subsequent years. Sex differences and patterns of associated morbidity may contribute to a better understanding of early life vulnerability to dental caries and their sequelae.

Over the years some effort has gone into understanding factors associated with the diagnosis of dental caries in the very young [1, 2]. Most studies have focused on the occurrence and proximal causes of dental caries across childhood [3-8]. Proximal causes are thought to be related to multiple factors, including diet, malnutrition, parenting feeding practices and education [9-26]. Over time, most study has focused on risk factors, including socioeconomic risk and prevention, yet preventable pediatric dental caries in early life remains an ongoing global issue [3, 27, 28]. Absent from this body of work has been the prospective study of the multi-morbidity associated with early dental caries. Multi-morbidity is an emerging field in the management of disease in terms of understanding its etiology, sequelae, and potential mechanisms, notwithstanding the relationship of early dental caries to the preventable burden of disease [9, 29-33]. To date examination of the relationship of epidemiological investigation to mechanism pertaining to early dental caries has not included study of multi-morbidity [34-38]. The main goal of the present paper is to describe in a regional population the broad spectrum of prospective multi-hyper-morbidity associated with dental caries diagnosed by physicians in the very young.

Data for this study was collected under ethics ID REB15-1057, representing the health seeking population from the Calgary Health Zone in Alberta, Canada between April 1993 and November 2010. Alberta physicians directly bill for payment the provincial health plan for each patient visit (even private clinics and practitioners). For each patient visit the data consisted of a record including an anonymous, encrypted, unique patient identifier, an International Classification of Diseases (ICD-9) diagnosis code, age, date, and sex. The analysed data consisted of a sample with two groups under the age of four years before January 1995. The two cohorts were those with and without early dental caries this age group. The sample of approximately 33,531 (48% female) individuals having a total of 2,864,790 physician diagnoses over 16 years was made up of two cohorts with dental caries (2.7% of the sample) and without dental caries (dependent variable) who were under the age of four years in the first two years sample data. Employing the encrypted unique identifiers for each of these two groups permitted merging all other patient-linked ICD diagnoses in the data set for the cohorts with and without dental caries. Given that physician billing was between 1993 and 2010, members of each cohort could have diagnoses up to the ages of 16-19 years. Within the cohort the median index age of diagnoses denoting membership in the dental caries group was one year of age for both males and females.

Categories of dental caries and associated gingivitis and periodontal disease were based on the following International Classification of Disease (ICD) diagnostic codes: 520- Disorders of tooth development and eruption; 521- Diseases of hard tissues of teeth; 522- Diseases of pulp and periapical tissues; 523- Gingival and periodontal diseases. Of note is that in Alberta Canada, from where the data derives, dentistry is funded independently from physician-based health care, hence the data informing this study likely represent the most serious cases identified incidentally in clinic visits primarily by general practice physicians (Table 1).

Further, the ratio of the frequency of diagnoses within each group ([(total # diagnoses within ICD diagnosis category)/(cohort sample size)]) was calculated for all unique ICD diagnoses where both groups were represented. ICD diagnoses arising only in the dental caries group were noted. This analysis permitted a standardized comparison of the differences in the intensity (unit frequency) of all diagnoses in sequence over time when represented by physician visit. Two graphical representations show proportional diagnosis ratios comparing the groups with and without dental caries within the cohort for the first (diagnosis) visit (Figure 1) and the first 15 visits in time for each sex (Figure 2). This approach to analysis represents a novel representation of temporal hyper-morbidity.

Index dental caries diagnoses were predominantly made by general practitioners and pediatricians (Table 1), presumably at early life checkups, once first teeth begin to erupt or have developed.

Table 1: Total dental caries diagnosed by medical specialization for under the age of 4 years before 1995.

The odds ratios ranked from highest to lowest are presented in (Table 3) for females (upper) and males (lower) odds ratios.

Figures 1 & 2 show respectively for males and females the sample proportion ratios for diagnosis (on visit) one and up to diagnosis (on visit) fifteen. What may be seen is that males and females differ to some degree in the profile of unique ICD diagnoses compared to one another in (Figure 1) for the first diagnosis. Also, within each sex it is apparent that the order of diagnoses varies considerably over the first fifteen physician visits. Only the first fifteen diagnoses are represented for the purpose of visualizing differences rather than illustrating all differences over all diagnoses. Within each sequence, while the maximum truncates at the upper range of 200 times higher in the ratio of proportions, the upper limit plateaus illustrate where the ratio for a particular sequence is greater. 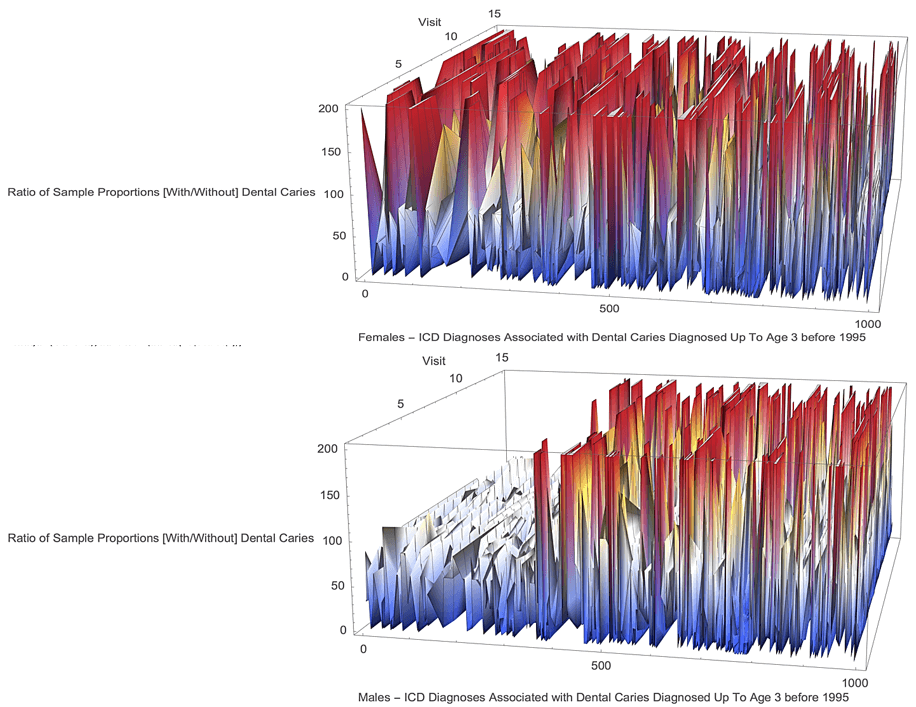 As in other fields of medicine, the study of temporal hyper-multi-morbidity is emerging as a field important to the understanding of potential mechanism, health policy, as well as planning treatment via understanding the most frequent disorders ensuing from defined disease states, a field as relevant as metabolomics and genetics [29-31]. In the case of early dental caries defined and diagnosed before the age of four years and followed over the next 16 years provides a basis for understanding the subsequent accumulation of associated diseases that would largely follow the initial diagnosis at a young age. However, it is also important in future study to consider the conditions where diseases and disorders arise temporally in advance of the onset of the index dental caries diagnosis. With autism, for example, there were diagnoses for boys and diagnoses for girls occurring before the index diagnosis of autism [29, 33, 39]. Even though the cut-point for the present study was before the age of four years, diseases that arise before the index diagnosis of dental caries may prove to play a mechanistic role in the emergence of serious dental problems. Temporal order was also found to be important in identifying diseases disorders and conditions that emerged in advance of the index diagnoses in separate studies (e.g., cancer) [31].

The odds ratios of diagnoses across the ICD main classes of disorder and disease are more prominent for males. While the ICD main classes largely overlap for females and males, the magnitude of the odds ratios within each vary and males have more ICD main classes represented in the dental caries cohort group. When examined on the basis of comparing the ratios of proportions of diagnosis frequencies between the cohort groups within each sex across the temporal sequence of diagnoses, more fine-grained differences are revealed. In comparison to this form of analysis, the odds ratios (ratios of counts of individuals within 2X2 cells) appears to be a rather blunt instrument. The temporal hyper-morbidity contribution of individual ICD disorders within the cohort group with dental caries is considerable within the ratios of proportions. The ratios of proportions provide and index of the diagnosis intensity (frequency) within individuals, whereas the odds ratios only provide counts of unique individuals.

The present study has limitations in that it considers only the groupings within the main classes of ICD disorder and only the temporal orders the first 15 visits showing the unique ratios of the ICD diagnoses represented in both cohorts. The bulk of disorders will tend to emerge after the age of four for individuals and the broad classes of ICD disorder which were considered in the present paper do not provide the detail level required to focus on any particular causal or sequelae mechanisms. Nevertheless, the significance of the results points by example to the relevance and subsequent need for more precise analysis based on this approach, as well as the conditional order of unique ICD diagnoses in the etiology and sequelae of dental caries.

Notwithstanding the limitations, the method presented provides a model to standardize and compare future morbidity research. The main contribution of the present paper, as with similar analyses of other serious diseases, is that the findings provide a broad stroke indication that standardized analyses may prove very useful in understanding with precision both the conditional etiology and the sequelae of temporal hyper-morbidity associated with dental caries arising in the very young [30, 31, 39, 40]. Finally, given the long-term impact on health status of early dental caries, understanding the epigenetic social and biomedical determinants of dental caries arising in individuals under the age of four years is of paramount importance in the formation of policy guiding both dental care and childcare standards. For example, should serious dental caries in the very young be an indicator of neglect?

© 2021 David Cawthorpe. This is an open-access article distributed under the terms of the Creative Commons Attribution License, which permits unrestricted use, distribution, and reproduction in any medium, provided the original author and source are credited. Hosting by Science Repository.
DOI: 10.31487/j.DOBCR.2021.03.05

Table 1: Total dental caries diagnosed by medical specialization for under the age of 4 years before 1995.

13.  Joury E (2019) Syria Profile of the Epidemiology and Management of Early Childhood Caries Before and During the Time of Crisis. Front Public Health 7: 271. [Crossref]

29.  Jakovljević M, Ostojić L (2013) Comorbidity and multimorbidity in medicine today: challenges and opportunities for bringing separated branches of medicine closer to each other. Psychiatr Danub 25: 18-28. [Crossref]

34.  Driscoll WS (1981) A review of clinical research on the use of prenatal fluoride administration for prevention of dental caries. ASDC J Dent Child 48: 109-117. [Crossref]