Traumatic injuries are the leading cause of death and the leading cause of disability among children [1, 2]. The most common causes of these traumas are falling from heights, car accidents, and child abuse [3, 2]. Patients with severe brain injury require surgical treatment [4, 5-7]. Currently, the problem of choosing the optimal surgical techniques for young children has not been fully resolved.

The study was conducted in two stages. From 1999 to 2008, CT morphometry was performed on 232 children to help determine the volume of the skull cavity “in vivo”. The study also correlated the brain size with age and established the dependence of the cranial cavity volume based on its circumference, while taking into account the age of the child [6]. In order to study the features of the clinical course of traumatic intracranial hematomas (ICH) in young children, which depends on the type of hematomas, and the degree of their volume index (CHVI). A comparative analysis of the clinical course of isolated traumatic brain injuries (TBI) with the formation of ICH supratentorial localization in 111 children under 3 years of age was carried out. The children were treated in the Department of Pediatric Neurosurgery of the City Children’s Clinical Hospital No.3 in Omsk, Russia from 2008 to 2018. Three groups were identified: Group A - children with epidural hematomas (n=30), Group B - children with subdural hematomas (n=43), Group C - children with multiple hematomas (n=38).

A comparative analysis of the results of the surgical treatment of 102 patients was carried out. In 71 patients, the value of CHVI was taken into account during treatment (Group I). In 31 patients, surgical treatment was carried out without the value of CHVI (Group II). All patients were evaluated for neurological status using “the Glasgow Coma Scale” (GCS), and CT or MRI studies were performed with the calculation of the CHVI index. The calculation of the CHVI was carried out using the formula:

Where A, B, and C are the main diameters of the hematoma, π - 3.14 (Figure 1). Studies conducted at the first stage allowed us to establish a correlation between the circumference of the skull and its volume (Figure 2).

When the children were operated on, 71 cases of surgical intervention, were carried out taking into account the CHVI. System statistical analysis was performed using the licensed statistical software “Statistica for Windows V. 8.0”, with preference given to methods of nonparametric statistics (Mann-Whitney, Kolmogorov-Smirnov, Kruskal-Wallis ANOVA, Spearman correlation analysis). To evaluate the proposed method of a differentiated approach to the surgical treatment of subdural clusters, the severity of the condition was assessed on all patients using the “Lansky scale” on the first day. The dynamics were assessed on the 7th, 14th, 28th days, as well as at discharge. To identify the differentiation in the dynamics of the conditions of patients in the study groups, the Yates-correction χ2 criterion and the exact Fisher criterion were used (when n<5).

I The Characteristics of Traumatic Intracranial Hematomas in Young Children

We analysed the features of the clinical course of traumatic ICH in 111 young children, depending on the type of hematomas and the value of CHVI. The distribution of early-age patients, by age and type of traumatic ICH, is presented in (Table 1).

Table 1: Distribution of patients by age and type of intracranial hematomas.

Group A - children with epidural hematomas (n=30) was represented as subgroups A1 (n=12), A2 (n=7), and A3 (n=11), depending on the value of CHVI. A direct correlation between the CHVI and the clinical picture of TBI in young children was established.


In mild epidural hematomas with mass effect (ME) up to 2% (A1), the volume of intracranial hematomas ranged from 2.3 to 9.0 cm3, and the dislocation of median structures was up to 2 mm. At admission, the majority of children (7 out of 12) were rated as moderate, with a GSC score of 10-11 points. The remaining 5 out of 12 children were admitted with a GCS score of 9 points. All of the children were admitted with general cerebral and vegetative syndromes. Focal pyramidal syndrome in the form of anisoreflexia was observed in 4 out of 12 children (Figure 3). When technical monitoring of the course of the traumatic process and the volume of intracranial hematoma was possible, a conservative treatment was used. 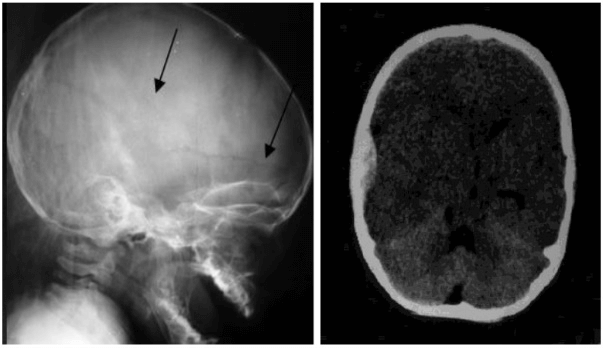 Figure 3: (L) MRI craniogram of a 6-month-old patient with an epidural hematoma (the arrow indicates a linear fracture of the parietal bone). (R) the result of a CT scan. ME<2%.

Upon admission to the hospital, out of 11 children, four infants were rated as moderate with a GCS score of 10 - 11 points, five of them were with a score of 8 points and two infants were with a score of 7 points. In 10 out of 11 children, of all age groups, in severe condition (GCS 7 - 10), manifested a number of focal syndromes, including focal craniobasal and dislocation syndromes. Newborns during the first months of life were distinguished by a manifestations of hydrocephalus syndrome and underwent decompression operations.

As seen in (Table 3), conservative treatment and minimally invasive methods of treatment were carried out in children with mostly mild and moderate mass effect. As the mass effect of the hematomas increased, the number of trephinations and decompressive craniectomies increased.

Table 3: Types of treatment for patients with EPH depending on the value of CHVI.


There were no neonatal children in this group. 7 out of the 10 children of group B2 at admission had increasing degradation of consciousness from sopor to coma and had a GCS score less than 10 points. All 10 of the children expressed cerebral, vegetative, and hypertension syndromes. As a secondary set of syndromes, 8 out of 10 children had focal pyramidal syndromes, and 5 out of the 10 had craniobasal syndromes.

Subdural hematomas with a CHVI greater than 4%, differed in volumes from 17.0 - 150.0 cm3, the dislocation of the median structures of the brain ranged from 0 - 20 mm, and there was variability in the clinical picture. A high degree of compensation was revealed, in children of a young age, to the increasing volume of SDH. Out of the 24 patients, 12 were admitted to the hospital in a compensated state. The loss of consciousness was established in one-third of the children, with most 1 to 3 years old. The presence of a light interval was more often observed in newborns and children in the first year of life with a duration of 1 to 8 days, which reflected the high compensatory capabilities of children of this age group.

Table 5: Comparative characteristics of types of treatment of patients with subdural hematomas depending on the CHVI.

Children with multiple hematomas were represented as Group C. The group was further divided into subgroups based on the CHVI of the hematomas, C1 (n=0), C2 (n=5), and C3 (n=33). No young children were identified with a CHVI of less than 2%. The severe condition of children with multiple hematomas reflected the severity of primary brain damage (multiple contusion foci, depressions), and fractures of the bones of the base of the skull.

Multiple hematomas with CHVI from 2 - 4% (C2) were characterized by a total volume of 15.0 - 30.0 cm3, and dislocations from 0 - 2 mm. Children of subgroup C2, with a GCS score of less than 8 points, were characterized by their severe condition and deprivation of consciousness, ranging from being stunned to in a coma. All patients at the time of admission had a detailed clinical picture of brain injury with expressed focal syndromes, the severity of which depended on the value of the total CHVI, their localization, and mutual location. The absence of brain dislocation did not exclude the presence of multiple intracranial hematomas in young children. The group of children with multiple hematomas with a CHVI greater than 4% (C3) was characterized by a volume of hematomas ranging from 20.0 - 120.0 cm3, and an extremely severe TBI (Figure 5).

Based on personal clinical studies and experience in the differentiated treatment of 71 children with traumatic ICH (Group IIIA), we determined the tactics and the scope of surgical treatment of traumatic ICH in young children, depending on the type of hematomas, the CHVI. Young children with membranal ICH, in compensated states, and CHVI with ME less than 2% received a conservative treatment, and the condition of the hematoma was monitored daily using neurosonography (NSG). 14 out of 71 children (20%) had good results. Therefore, the objective criteria for hematomas of "small" volume for young children was a CHVI less than 2%. In the presence of subgrondation of the calvaria, along with hematomas with a CHVI up to 2%, surgical intervention was limited to repositioning the fractured bones and the simultaneous drainage or removal of the hematoma. With depressed penetrating fractures, neurosurgical treatment of the fracture was performed, and the hematoma removed. In the surgical treatment of young children with traumatic ICH, the main task was to achieve radical removal of ICH while maintaining the minimally invasive nature of the intervention.


Table 7: Comparative characteristics of the types of treatments for patients with multiple hematomas depending on the ME.


In traumatic ICH with a CHVI of 2 - 4%, preference was given to minimally invasive methods of ICH removal (puncture, trephination, PEED) (Figure 6). To remove subdural hematomas in young children, a method of long-term external endocapsular drainage was used. In children with subdural hematomas with ME greater than 4%, the preference remained for minimally invasive methods of removal such as PEED. In children who had ICH with a CHVI 2% and higher, who developed dislocation syndrome and penetrating depressed fractures, preference was given to resection decompressive trepanation of the skull, taking into account individual skull sizes. Of the 82 operations performed, 54 (66%) were minimally invasive, and 15 (34%) were decompressive craniectomies. The diversity of ICH with the predominance of SDH and multiple hematomas caused the frequency of bilateral surgeries and multiple surgeries.

The result of treatment was carried out using the adaptation of the Lansky scale and the Glasgow outcome scale (GOS). The data obtained showed that in Group I, conservative treatment prevailed in 20% of children (14 out of 71), and surgical interventions in 76% (54 out of 71 operations) were minimally invasive; in Group II, 53% (p<0.05). Decompression surgeries were performed twice less frequently in Group I (10%) than in Group II (23%) (p<0.05). Repeated surgeries in Group II (37%) were associated with an illogical choice of the primary method of surgical intervention.

The results of the condition of children in the study groups assessed on the Lansky scale, in dynamics, showed that there were no significant differences in the condition of patients at admission; however, on the seventh and subsequent days, the degree of adaptation of children in Group I was significantly higher, by 19-30 points (2 times), than in children in Group II, which confirms the clinical effectiveness of the method, (p<0.05).

© 2021 Igor Ivanovich Larkin. This is an open-access article distributed under the terms of the Creative Commons Attribution License, which permits unrestricted use, distribution, and reproduction in any medium, provided the original author and source are credited. Hosting by Science Repository. All rights reserved.
DOI: 10.31487/j.SCR.2021.04.08

Table 1: Distribution of patients by age and type of intracranial hematomas.


Table 3: Types of treatment for patients with EPH depending on the value of CHVI.


Table 5: Comparative characteristics of types of treatment of patients with subdural hematomas depending on the CHVI.


Table 7: Comparative characteristics of the types of treatments for patients with multiple hematomas depending on the ME.

Figure 3: (L) MRI craniogram of a 6-month-old patient with an epidural hematoma (the arrow indicates a linear fracture of the parietal bone). (R) the result of a CT scan. ME<2%.