Desmoplastic Malignant Melanoma with the Invasion of the Orbit

Malignant melanoma is one of the most aggressive skin tumors with an increasing incidence and high mortality. The aim of this article is to draw attention to the difficulties of differential diagnosis of malignant melanoma and the importance of early surgical treatment. The authors describe a case of locally advanced desmoplastic malignant melanoma located in the periorbital area of 73-year-old patient, causing massive ulceration, expansion to skull base and orbit, and psychological deterioration of the patient.

Malignant melanoma is one of the most aggressive skin tumors with unfavourable prognosis and very high mortality, which is connected especially with advanced stages of this disease. The incidence of malignant melanoma is permanently increasing worldwide. Malignant melanoma remains the leading cause of death from skin malignancies [1]. The only curative treatment is the complete surgical excision. For a favorable prognosis, the detection of this disease in the initial stage, and its immediate complete surgical removal, is essential.

Desmoplastic melanoma (DM) is an uncommon variant of melanoma, accounts for less than 4% of all cutaneous melanomas, and occurs mostly in individuals ≥ 60 years of age. It usually manifests as a firm papule, nodule, or plaque. It usually appears in chronically sun-damaged skin, especially the head and neck [2, 3]. Clinically, DM has different course from conventional melanoma. It shows a higher tendency for local recurrence and less common metastases to regional lymph nodes.

Early detection is a challenge for both physicians and pathologists. Clinically, more than 50% of lesions are amelanotic, and the clinical features may mimic slowly growing nonmelanocytic lesions. These lesions can therefore be mistaken clinically for a scar, a fibroma, basal cell and squamous cell carcinomas, or fibromatosis, delaying their correct diagnosis and treatment [4]. Histologically, diffuse positivity for S-100 and weak positivity or negativity for HMB 45 and negativity for cytokeratin [5].

The patient is a 73-year-old woman in complete remission until recently. In 2016, the patient was sent to our department from a dermatologist for non-healing resistance of the right temporal periorbital landscape, which has been treated with cryosurgery method several times (Figure 1). At that time, a biopsy was performed with the result of actinic keratosis. The patient was sent to the Department of Dermatovenerology of the University Hospital in Pilsen, where a new biopsy of the lesion was performed with a result of histiocytoma. 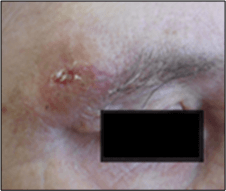 The same day, the patient was sent to the Department of Plastic Surgery of the University Hospital in Pilsen, where the surgery was performed.

However, the definitive histopathological examination of completely excised (but with minimal surgical margins) desmoplastic melanoma (Breslow index 9mm) revealed that tumor cells were positive for S-100 but negative for HMB45, melan A, and cytokeratines AE1-3. Given the histology result, re-excision and extirpation of the sentinel node was indicated. However, despite repeated instructions, the patient refused to undergo the indicated procedure. Furthermore, the possibility of immunotherapy was explained to the patient, which she also rejected due to fear of negative side effects. Due to the reasons told above, the method of observation was chosen, i.e., regular physical examinations and ultrasonographic inspections. The patient was also educated regarding the self-examination method. 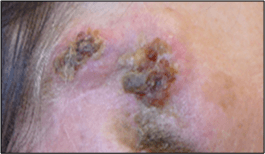 Figure 2: Relapse of the disease. 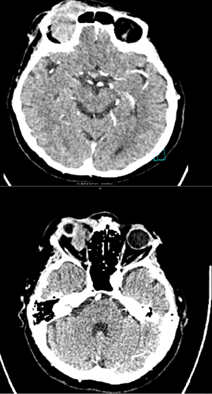 Figure 3: A tumor of soft tissue, invading the upper part of the right orbit with compression of the eyeball, oculomotor muscles and optic nerve. Furthermore, there are signs of partial destruction of the lower and anterior walls of the frontal sinus.

In 2019, the patient came to our outpatient clinic with a multinodular tumor in the area of the scar on the right forehead (Figure 2). The finding was indicated for surgical treatment. However, there was a rapid progression of this tumor, when the involvement of the right eye bulb was early evident. PET/CT (positron emission tomography) (Figure 3) examination was supplemented with the finding of locally advanced metabolically active tumor infiltration of the skin and subcutaneous tissue in the right frontal region with the invasion of the upper part of the right orbit and with the destruction of the lower and anterior wall of the frontal sinus. Furthermore, a metabolically active lesion in the right breast and multiple, metastatic, skeletal lesions were also found on this scan.

The finding was concluded as inoperable by the oncological multidisciplinary team. As the patient was psychically deteriorated because of smelly exulceration and consistent pain of the right eye, we decided for palliative enucleation of the right orbit and excision of the forehead lesion (Figure 4). Histological examination confirmed the recurrence of malignant melanoma with ingrowth into the frontal sinus. The defect was covered with a dermo-epidermal graft.

Malignant melanoma is one of the most aggressive cancers and is potentially lethal if not detected at an early stage and treated properly. As the incidence rate is increasing worldwide, efforts are made to better understand the behavior of this heterogeneous disease. Unfortunately, early diagnosis combined with surgical therapy is currently the only curative treatment. The clinical presentation of DM is often non-specific with lesions showing local growth; they are often misdiagnosed and receive inadequate treatments due to their inconspicuous presentation [6, 7]. Surgical excision is the current treatment of choice. The evidence shows adjuvant radiotherapy should be the standard treatment of DM patients with positive margins, advanced Clark level, Breslow thickness 4 mm or greater, recurrent DM, and inoperable DM [8].

In the case of our patient, misdiagnosis of the benign actinic keratosis significantly prolonged the time of the treatment. Unfortunately, at the time of the patient's arrival at the outpatient clinic of our department, the finding was already significantly locally advanced and ulcerated. In case of diagnostic uncertainty, total excision, and histological examination of the suspected lesion is recommended. This procedure was also performed in our patient. When the finding of malignant melanoma was confirmed, re-excision was indicated. Unfortunately, our patient was non-compliant to the suggested treatment and rejected the re-excision of the scar and moreover recommended adjuvant therapy which resulted in an early local recurrence, and subsequent rapid progression of the disease with only palliative and symptomatic treatment left over. Radiotherapy was administered to reduce the risk of local recurrence [9].

We present a rare case of locally advanced desmoplastic malignant melanoma located in the periorbital area of 73-year-old patient, causing massive ulceration, expansion to skull base and orbit, and psychological deterioration of this non-compliant patient. It highlights the difficulties in the correct diagnosis and importance of early surgical treatment of this highly aggressive cancer.

© 2021 Inka Treskova. This is an open-access article distributed under the terms of the Creative Commons Attribution License, which permits unrestricted use, distribution, and reproduction in any medium, provided the original author and source are credited. Hosting by Science Repository. All rights reserved.
DOI: 10.31487/j.SCR.2021.01.03

Figure 2: Relapse of the disease.

Figure 3: A tumor of soft tissue, invading the upper part of the right orbit with compression of the eyeball, oculomotor muscles and optic nerve. Furthermore, there are signs of partial destruction of the lower and anterior walls of the frontal sinus.