A 5-year-old boy was referred acutely to the on-call ENT doctor following multiple remote consultations with his general practitioner with 2 months history of worsening left-sided foul-smelling nasal discharge and bleeding. He underwent examination under anaesthesia and removal of nasal foreign body which was subsequently identified as a button battery. This case highlights the challenges posed to clinicians during the COVID-19 pandemic but also serves as a reminder to keep a high index of suspicion and low threshold for clinical examination in suspected cases of nasal foreign body.

Nasal foreign bodies in the upper airway are a common finding in children [1]. Foreign bodies can be anything that a child would be attracted to experiment with, such as various toy parts, household objects, and food. Most foreign bodies are relatively safe to be in contact with the nasal wall mucosa and septum. However, button batteries require early removal due to their rapid chemical disintegration. According to US surveillance data, there has been a significant increase in button battery incidents in the past two decades with increase in morbidity and mortality in some cases [2, 3]. As button batteries are used increasingly in home electrical appliances, children have frequent exposure to them and experience inhalation, ingestion or keep them lodged in their nasal cavity and external ear canal. While some of these events are witnessed by the parent/carer and early medical support is sought, there are other unwitnessed events which makes diagnosis difficult.

The emergence of COVID-19 has altered the way in which healthcare professionals practice medicine and deliver care. In particular, in primary and secondary care, there has been an increase in the utilisation of telemedicine to minimise the risk of viral exposure, to both the clinician and patient. Whilst there are many advantages to this, in some cases, remote consultations may reduce a clinician’s index of suspicion due to lack of clinical examination. Here, we present a case of a 5-year-old boy with delayed management of a button battery lodged in their nasal cavity.

A 5-year-old boy was referred by his general practitioner (GP) acutely to the ENT junior doctor on-call with a 2-month history of worsening left-sided foul-smelling nasal discharge and bleeding. His mother denied any witnessed episodes of nasal foreign body insertion. Consultation over the telephone was carried out when his symptoms initially began 2 months prior, and naseptin nasal cream was prescribed. A further telephone consultation was carried out as his symptoms persisted and laboratory testing including full blood count, clotting screen, thyroid function test and vitamin D levels were performed. This showed a low vitamin D (35.9nmol/L; normal >49.9nmol/L) which was managed with vitamin D supplements. A face-to-face consultation was arranged due to persistence of symptoms.

On examination, right nostril was clear but left nostril revealed a possible foreign body anteriorly. Attempts were made to remove this by the ENT junior doctor on-call but unsuccessful. Consequently, the child was consented for examination under anaesthesia of the nose and removal of nasal foreign body. Intra-operatively, the foreign body in the left nostril was removed successfully. A copious amount of crusting was found overlying the foreign body and subsequently it was found to be a button battery (Figures 1 & 2). The child was also found to have an anterior nasal septal perforation measuring approximately 5 millimetres (mm) in diameter. The child was discharged with advice to apply naseptin nasal cream in the left nostril twice daily for 2 weeks and a follow-up appointment arranged in 3 months’ time. 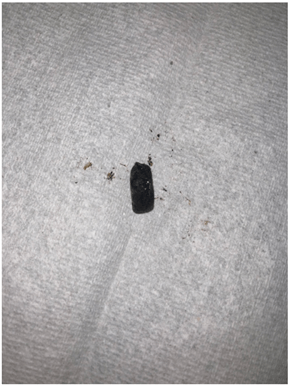 Figure 1: Appearance and positioning of nasal foreign body in nasal cavity during procedure. 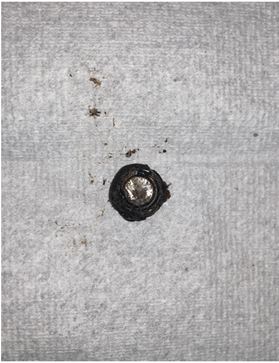 In terms of presentation, button batteries, if unwitnessed, present in various ways either with acute or chronic symptoms [5]. On the one hand, they may be asymptomatic for a long period of time, but on the other, they may present with rhinorrhoea, foul-smelling nasal discharge, epistaxis, or symptoms of chronic rhinosinusitis [6]. Symptoms and findings also include nasal obstruction, septal perforation or even necrosis of nasal bones in the long-term and peri-orbital cellulitis [7]. When managing nasal foreign bodies, the immense variation in size, shape, materials and timing of insertion as well as patient’s age and co-morbidities are some of the factors that physicians consider when examining a patient with this complaint [8]. It is a combination of the doctors’ skillset and dexterity as well as cooperation of the patient to achieve treatment which is removal of the foreign body. While some of them may be removed within primary care environments, other may need referral and removal by a specialist even under general anaesthetic if the removal is considered challenging.

Button batteries in the nasal cavity are considered an ENT emergency, requiring urgent removal. Due to their chemical composition, button batteries can cause chemical and electric burns that lead to extensive tissue damage and complications that are difficult to address in the long-term [9]. While other foreign bodies cause minimal morbidity, button batteries can cause severe local tissue injuries, septal necrosis or meatal stenosis depending on several factors such as their location, duration of mucosal exposure, voltage and chemical condition of the battery [10, 11]. The mechanism of injury involves electrolyte release causing liquefactive necrosis of the nasal cells as well as creation of an electrical current causing an electrical burn [12, 13]. The latter is possible due to a mucosal bridge that is created between the negative and positive terminals of the battery, which closes the electrical circuit and allows the current to flow [8]. Subsequently, the electrical current creates free hydroxide radicals that raise the mucosal pH causing caustic injury and coagulative necrosis. The tissue damage can easily then extend to surrounding tissues as well as vessels and cause further injuries. Despite the strength of the battery which depends on its previous use, the process of the caustic injury can start as soon as 15 minutes after mucosal contact [14, 15].

The fact that button batteries present in various ways with a gradient of severity as well as their potential serious complications, highlights the importance of early and correct diagnosis to address the problem acutely. This involves prompt and effective examination of the patient by the appropriate healthcare professionals to confirm the presence of a button battery and seek advice. However, face-to-face examinations have become challenging nowadays due to the implemented rules to prevent spread of COVID-19. Patients are triaged to identify which clinical problems are suitable to be managed remotely and which require face-to-face consultations. Recent studies have shown that there has been a revolutionary change in remote consultations following the emergence of the COVID-19 pandemic [16]. Even though, remote consultations have been received well from patients and clinicians and their time efficiency is mutually acknowledged, there are other issues still to be addressed such as poor patient communication, technical issues as well as lack of standardisation protocols [17]. Scepticism arises also regarding the limited physical examination and the fading doctor-patient relationship that both have a profound impact on general practice and the evolution of its core competences [18]. Consequently, COVID-19 measures implementation has evidently altered primary care practices with inevitable positive and negative aspects that are being continuously investigated and addressed.

In our case, the shift in practice towards increased remote consultations in combination with the unusual presentation of the button battery, led to recurrent consultations. On the third occasion of seeking advice from general practice, the patient received a face-to-face consultation and anterior rhinoscopy raised the suspicion of a nasal foreign body, subsequently prompting a referral to secondary care. Despite the challenges posed by COVID-19 and the need for minimising unnecessary direct patient contact, we recommend a high index of suspicion and low threshold for clinical examination with regards to possible nasal foreign bodies especially in the pediatric population, in order to avoid chronic complications of persisting nasal foreign bodies.

© 2021 Sofia Anastasiadou. This is an open-access article distributed under the terms of the Creative Commons Attribution License, which permits unrestricted use, distribution, and reproduction in any medium, provided the original author and source are credited. Hosting by Science Repository.
DOI: 10.31487/j.SCR.2022.05.01

Figure 1: Appearance and positioning of nasal foreign body in nasal cavity during procedure.

18. Verhoeven V, Tsakitzidis G, Philips H, Royen PV (2020) Impact of the COVID-19 pandemic on the core functions of primary care: will the cure be worse than the disease? A qualitative interview study in Flemish GPs. BMJ Open 10: e039674. [Crossref]